The Police are Monkeys?


I use to have much affection for Polis Diraja Malaysia. My old man was with the Police Force from the days of Fenner, Salleh, Hussein, Rahman right up to Tun Hanif Omar under whom he served. He wore his uniform with much pride and we all watched with love and pride  as my Father left the house in full uniform to go to work each morning. I still remember those days when the policemen still wore shorts and knee high stockings with wide black belts. Those were also the days when Holdens were the car of choice used by the police and there were still  smatterings of British officers still serving in the force.

During the Emergency we encountered Police Road Blocks every time we went outstation in our Borgward Isabella - no air condition just the wind blowing through the open car windows to cool us. My seat was on the side behind my Father so that I could keep an eye on the road ahead and warn him of any incoming cars lest his attention is diverted elsewhere. Even though Father was a Police Officer we still had to open our boot and allowed them to check that we were not carrying any food for the CT''s - in fact my Father insisted that they do so. Every now and then we would pass convoys of Army Lorries carrying British and Malaysian Soldiers to God knows where to fight the CT's and these encounters made us felt safe and secure in the knowledge that there were out there in the front line defending our people and our country against the unseen CT's. 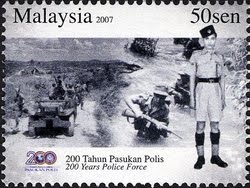 As my Father rose in rank we got older and remembered more of our life. He was constantly being transferred from State to State. We have lived in every State in Malaya with the exception of Perak, Trengganu and Negri Sembilan and in each state that we lived in I remembered the houses with a clarity that still makes me able to walk through those houses to this very day. I was too young to remember Langkawi but after Langkawi came Pendang, Tampin, Alor Gajah, Johor Baru, Pengkalan Chepa, Kuala Lumpur, Penang, Kuala Lipis, Kuantan and then back to Kuala Lumpur. A fascinating childhood of houses, places and people that seems to blur into one distant past with wonderful memories of fishing, hunting and mostly of my Father doing good deeds and good work in the Police for people who were appreciative and respectful of the work the Police do.

I wonder why all this has changed in the Malaysia that we live in today. This is the image of the police today! 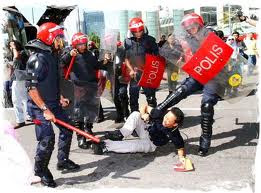 Barbaric bullies who care little for the well being of the people they are sworn to protect. Their top brass are more known for their pandering to the demands of their political masters than for leading the rank and file through these demanding times that PDRM are now going through. Politics not the Police Force seems to be their main preoccupation. And more so after they retire! Police brutality and corruption in the  force are now what we equate this once great police force with today - and the Police are everywhere wrecking havoc on our people and taking bribes like there is no tomorrow - quiet like a bunch of monkeys going crazy upon finding themselves inadvertently in a banana plantation.

This once great Police Force have now become a hoard of Baboons and monkeys in that banana plantation greedily gorging bananas! Now they have become bold enough to claim Malaysia as their banana plantation to do as they will.

How can we have monkeys looking after a banana plantations? Yes they may be monkeys with degrees and masters from universities. They may be monkeys dressed in crisps uniform with epaulets and sparkling brass insignias dotted all over their uniforms and peak caps. They may be well drilled, well armed monkeys and well disciplined monkeys able to take orders and obey commands from their officers but they are all still monkeys who are now being tasked with guarding this country of ours from crime and any threat to national security. But all they do is eat bananas!

So do not forget...you must never trust a monkey in a banana plantation. A uniform, disciplined, well armed monkey is still a monkey!