THE CHINESE MUST STOP BLAMING THE MALAYS!

THE CHINESE MUST STOP BLAMING THE MALAYS! 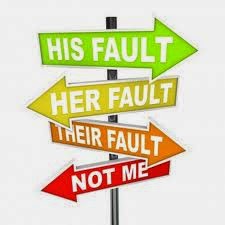 There has been a significant airing of angst on the social media and in conversation amongst friends by many Malaysian on the ills they face living in Malaysia. The Indians decry the lack of economic progress and increasing poverty amongst their people. The Dayaks and Ibans are becoming more insistence that they will decide their own fate, not Putrajaya. The Orang Asli do not have a voice nor the means to make themselves heard - so we do not hear any of their cry even if they are in dire need of help. Today the rumblings of people who are no longer content to sit quietly and accept their untenable lot is beginning to deafen our ears.

And the most vocal are the Chinese. A significant number of these Chinese have voted with their feet – they have left to look for greener pastures elsewhere. And those that remain are organizing themselves into portent political groupings away from MCA – groupings with the potential to secure real political power in the coming 13th general elections. The Chinese can be a force for good or bad in our movement towards ABU. Good because together with the Malays and the other races, we can make ABU happen. Bad because the animosity between the Chinese and the Malays for perceived wrongs by the latter on the former over the implementation of the policies under the NEP still seethes just below the surface between the two races.

I think it is time that we discuss these matters openly and without rancour or prejudice – and ‘these matters’ I am referring to are the Chinese!

To all you Chinese who resent the manner in which you are being treated – for lack of a better word – as second-class citizens – I want to say this.

Blame MCA, blame the BN government, blame UMNO, blame the lack of education to make our young understand the need to celebrate our differences and not accentuate it.  Blame anything or anyone you want but do not blame the Malays.

Yes the Chinese are the favourite bogeyman UMNO loves to blame for all the ills in Malaysia. There are many that will go so far as to say that the Malays too are to be blame for all that is wrong about this nation of ours. The Chinese claim that between UMNO and the Malays they are finding themselves to be the perpetual target for the ills in our nation – racial and religious tensions and the uneven and disproportionate distribution of wealth amongst the people.

And these Chinese are now asking themselves why is this so! “Why Me?” Why does UMNO and  the Malays want to target a race that has always believed in the virtues of hard work and who pride themselves in their ability to survive and succeed in life through whatever trials and tribulations thrown at them? A race that have contributed more then their fair share towards the economic success of this country. Is it not enough that they have had to compete on an uneven playing field with the Malays in business, faced overwhelming odds when competing with Malays in any tenders and projects from the Government and if that was not enough, have the education of their children and their civil liberties manipulated to favour the Malays?

I know what you Chinese have faced. Many Malays know this. Many non-Malays know this – but are we not all victims of this travesty that this UMNO led BN government dare to call a ‘Government’? A corrupt and irresponsible government that has chosen to treat the Chinese as their favourite whipping boy?  UMNO has prosecuted, abused and denied the Chinese their rights in almost every which way the Chinese choose to turn. And of course after enduring these abuses for so long the Chinese are now angry that it is so! And they intend to do something about it!

But do not be angry at the Malays. Yes many billions have been spent on the Malays and many opportunities in business and education have been denied to the Chinese in favour of the Malays. You Chinese must be sick of it!

And we know that what ever and where ever there are opportunities for work, education and business in Malays, these opportunities are not for the Chinese but are reserved for the Malays.

Would you want to be a Malay?

A Malay that has a Malay led government that is corrupt, arrogant and totally without compassion for its own race?

Do you want to be a Malay that is constantly bombarded by religious pronouncements that embarrasses you  - and these come not from the Koran but from government appointed religious bodies because this Malay government uses religion to divide and rule its own people?

Do you want to be a Malay whose private life is not theirs to do as they like but is under the control of the same government appointed religious bodies that think that it is their duty to raid houses of ill reputes to save Malay girls from a life of depravity while the same politician that appointed them have lives that would rival Hugh Hefner?

Every ill that now burden our country can be said to be the fault of UMNO – and is not UMNO a Malay political organization? And you have in Malaysia 9 Sultans and one King – all Malays – all the very personification of waste and an example of an institution that does no good to anybody but themselves! All of them Malays!

Do you want all this on your shoulders and maybe more, much more, if you are a Malay?

That UMNO is a Malay political organization is a cross that we Malays will have to bear until we can rid ourselves of this curse. And we can only do so as one people – so please all you Chinese – do not blame the Malays for your ills. The blame lies with UMNO not with us Malays.
First posted by steadyaku47 on Thursday, March 01, 2012
Posted by STEADYAKU47 at Saturday, April 26, 2014