In the aftermath of the May 13th incident of 1969, as I watched the grainy black and white images of the incident in my flat in Finsbury Park London only one thought was in my head. I knew my parents and family were safe because my father was in the Police Force so I had no worry of their safety. The only thought in my head was this :

I watched as truckloads of FRU's and Soldiers were deployed in the streets of KL and I knew if anything could bring order to the chaos - they would. There were images of shops and houses burning. People running here and there - to far away for me to see if they were Malay, Chinese or Indians. The information coming through was sketchy at best but worrying. I had some inkling of what the toxicity of racial violence fueled by politicians could do to any nation what else to a multi-racial nation like Malaysia.

What will Umno do?

There was Tunku and there was Tun Razak. Tunku the Prime Minister knew enough to allow Tun Razak to take the reins of government and having taken it, Tun Razak was principled enough to do what was needed to put our nation back on the straight and narrow. And having done that Tun Razak gave back the nation to the people and he governed as a responsible servant of the people.

The matter of which race dominates the political landscape of Malaysia has been settled. Unquestioningly the Malays are in control thanks to no small measure to Umno. This is a fait accompali that is irreversible because demographic engineering has ensured that it will be so and the laws of the land are skewered to reflect same. Let us accept this and move on.

How do the non-Malays response to this reality?

I must confess that there is no Chinese leader in government or in opposition that has my respect. What my respect is worth is really nothing worth debating about - suffice to say that whatever you might say it is worth you are going to get at least two cents worth of it here in this blog if you care to read what I write. And while I am at it, the same goes for the Indians too - there is no current Indian leader that deserves anything more than a goodbye wave from me whether they are coming from or going to a general election.

Sabah and Sarawak to all intents and purposes will plot their own destiny helped in no small measure by a Federal government that has need of their electoral support to stay in power - at least for now.

What of the Malay leaders?

There is Najib Razak - Prime Minister, President of Umno, Numero Uno of BN, wife to Rosmah and Chairman of 1MDB - and there in lies a tale. All that is wrong with the leaders we have in Bolehland is magnified many billions times with 1MDB.

The speed at which 1MDB is unraveling is breathtaking. After the Sarawak Reports the fog surrounding 1MDB is about to clear - to clear to reveal what? A shipwreck of calamitous proportions!

1MDB's US dollar bond is not yet at "Junk Status" but moving southwards rapidly despite having a "substantial" letter of comfort that effectively commits the Malaysian Government to "guarantee" it.

All indication points to an independent audit by PAC - Jawatan Kuasa Kira-Kira Wang Negara. This is no main main Jawatankuasa - five Pakatan reps are in that committee and its Deputy Chairman is Kepong MP Dr Tan Seng Giaw from DAP. Short of a Public Inquiry what PAC will do is to examine the accounts of 1MDB without fear or favor.

The image of Arul Kanda standing beside the Malaysian Flag (ala The PM or King) gives us an idea at what level this 1MDB fiasco is going to impact upon the financial structure of our nation. 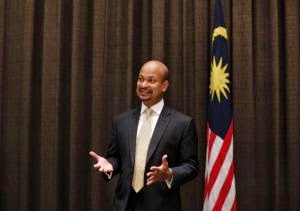 Cabinet, (the Malaysian one lah), may have approved Rosmah's use of the government jet but there certainly is nobody with enough balls (you need three not two balls to do this!) in cabinet to want to assumed collective responsibility for a RM42 billion debt that 1MDB has racked up!


Malaysia's indebted and controversy-ridden state investor 1MDB will be left as a skeletal structure and possibly dissolved under a debt repayment plan in which most of its assets will be sold, sources with direct knowledge of the matter told Reuters. KUALA LUMPUR: Malaysia's indebted and controversy-ridden state investor 1MDB will be left as a skeletal structure and possibly dissolved under a debt repayment plan in which most of its assets will be sold, sources with direct knowledge of the matter told Reuters.
The power and property fund, a pet project of Prime Minister Najib Razak with assets worth US$14 billion, was hit by losses last year and nearly defaulted on a loan payment. The near-miss drove down the ringgit currency and Malaysian government bonds and prompted calls from opposition leaders to make the fund's accounts more transparent.

The state fund's 42 billion ringgit (US$11.6 billion) debt includes a US$3 billion bond sale in 2013 that was one of the largest global issues from Southeast Asia.

Under the aggressive restructuring plan, crafted by new boss Arul Kanda and blessed by the government, the fund will sell 80 percent of its power unit Edra Energy via a stock market listing, three sources with direct knowledge of the situation told Reuters.

More than 18 billion ringgit of 1MDB's debt linked to its power assets would go under Edra Energy ahead of the listing, which is due to be kickstarted in 6-9 months time, the sources said.

The fund, which has Najib as chairman of its advisory board, will also sell the bulk of its land assets and stakes in two high-profile property projects, Tun Razak Exchange (TRX) and Bandar Malaysia, after splitting them into separate entities, as already partially indicated in a strategic review unveiled last month.

The Finance Ministry, which is headed by Najib and is the sole owner of 1MDB, did not respond to a request for comment.

1MDB said in an email that Edra Energy would be "monetized" in 2015 and the TRX and Bandar Malaysia projects would be ultimately owned by the finance ministry.

This process would turn 1MDB into a skeletal structure that could eventually be dissolved completely, said one person, who spoke on condition of anonymity because of the sensitivity of the issue.

"It's become a hot potato for the Malaysian government. It was just too much to handle," said another source.

1MDB said on Wednesday that its plans to list Edra Energy were on track. It said the fund would re-submit an application for an initial public offering after cancelling a submission made in November. It did not elaborate.

Arul, appointed in January to revamp the fund, has carried out a strategic review of 1MDB's finances and announced last month the fund would monetize Edra Energy this year, run real estate projects as standalone entities and sell assets to repay lenders. He did not disclose any financial details.

A respected former investment banker who was previously at Abu Dhabi Commercial Bank, Arul was brought in to see if it was possible to salvage the fund, but decided it was best to wind down its businesses after carrying out a thorough 6-week review.

1MDB, which analysts view as a cross between a sovereign wealth fund and a state-backed strategic fund, was established in 2008 as the Terengganu Investment Authority with 10 billion ringgit to manage oil royalty payments to the resources-rich northern state of Terengganu.

But as Najib came to power in 2009, he renamed it 1MDB and turned it into a fully-fledged investment fund.

1MDB expanded by purchasing pricey power assets from Malaysian tycoon Ananda Krishnan and gaming-to-plantation conglomerate Genting Bhd , and large plots of land in the capital and other regions of Malaysia, racking up debt in the process until it plunged to a loss last year.

Krishnan also lent 2 billion ringgit to 1MDB last month, pulling the fund back from the brink of the possible default on a bank loan payment, sources said. Officials at Krishnan's investment vehicle Usaha Tegas were not immediately available to comment.

Political leaders, including former prime minister Mahathir Mohamad, have demanded an inquiry into 1MDB's finances and are also calling on the government to explain transactions that they allege resulted in siphoning off public funds.

Najib said on Wednesday he had instructed the Auditor General to independently verify 1MDB's accounts after the allegations. But question marks remain on whether investors would be interested in the fund's IPO and sale plans.

"On 1MDB, it really boils down to the lack of transparency which cements it as a known unknown," said Weiwen Ng, an ANZ analyst based in Singapore.

"Greater transparency and accountability of the 1MDB issue would certainly help for future sales of assets and any such possible restructuring."