Najib at 30 :"When I interviewed Najib in a hotel suite in the federal capital, Kuala Lumpur, he was urbane, confident and relaxed enough to be smoking a midday cigar".

Malaysia is no progressive society 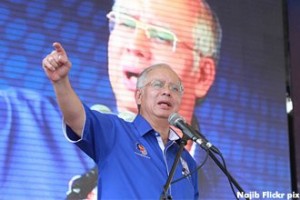 In 1984, I co-wrote a story about Malaysia’s young politicians to watch, among them Najib Razak, then the 30-year-old head of government of his home state, Pahang. When I interviewed Najib in a hotel suite in the federal capital, Kuala Lumpur, he was urbane, confident and relaxed enough to be smoking a midday cigar. At the time Malaysia was a sleepy, mainly agriculture-based economy just in its second decade of industrialization. I remember thinking that the British-educated Najib — a political blue blood (his father, a Lincoln’s Inn barrister, was a former Prime Minister) from the heartland — could one day lead Malaysia and enable its transition from tradition to modernity.
I was right on one count — Najib is today Prime Minister — but wrong on the other. Under his watch, Malaysia is no progressive society, especially on a critical front for the nation: religion.
In Asia, amid the hot cold war between China and Japan, and the turmoil in Thailand, small but vital Malaysia has flown under the radar. But Malaysia — which U.S. President Barack Obama will visit in April — matters because, more than Indonesia or Turkey, it is a study in how a country can or cannot reconcile Islam with the contemporary age. The challenge is greater for Malaysia given its distinct ethnic groups: about half of the 30 million population is Malay, nearly a quarter Chinese, followed by indigenous peoples and Indians. Muslims are in the majority, but while Islam is the state religion, Malaysia, unlike, say, Iran, is not an Islamic state — its constitution is secular, with a rainbow of religions allowed. Shari’a, applicable to Muslims mostly for issues of family and faith, coexists with civil law. Friction exists between Muslims and non-Muslims, and the system is hardly flawless, but it has pretty much worked.
That system is now under strain. In recent months Najib’s United Malays National Organization (UMNO), which leads the ruling coalition, has become more strident about its brand of Islam. During a party conclave in December, several UMNO leaders called specifically for Sunni Islam to be enshrined as the state religion. This came after the arrest of two Shi’ite Muslims for possessing books on Shi’ite Islam and a ban on the word Allah in reference to a non-Muslim deity, even though such usage has long been common. In January, Islamic officials in Selangor state raided a Christian organization and seized some 320 Malay-language Bibles that referred to God as Allah. The parish priest of a Selangor Catholic church, Father Lawrence Andrew, is being investigated under the Sedition Act for defending such use of the word.
The Malaysian authorities say they are trying to pre-empt religious tension. But, if anything, they are undermining a largely peaceful status quo. What’s happening in Malaysia also echoes a disturbing trend in two other Muslim-majority Southeast Asian countries. Officials in Indonesia’s Aceh province are thinking of subjecting non-Muslims to Shari’a, while, elsewhere in the country, Shi’ites, Ahmadis and Christians have been attacked. In October, the Sultan of Brunei announced that his kingdom would permit cutting off limbs for theft, stoning to death for adultery, as well as flogging for homosexuality and the drinking of alcohol. All this smacks of an intrusion of Saudi-style Islam that is not widely accepted in Southeast Asia — the region has been the more tolerant for it.
Such moves stain the reputation of the Association of Southeast Asian Nations (ASEAN) to which Malaysia, Indonesia and Brunei belong. Though corruption, injustice and inequality still afflict most of ASEAN, it has ever increasing economic and geopolitical clout, and its trajectory is onward and upward. The upheavals in Thailand and Cambodia reflect a struggle for democracy. Even ASEAN’s current chair, onetime global pariah Burma, is reforming.
Najib was too when he came to power in 2009. A moderate, he introduced changes that made Malaysia more open. He has backtracked since to appease UMNO conservatives, many of whom want him out. But religious jingoism is a bigger sin than political calculation, because how a society treats its “other” reveals its core. Those who would impose their dogma might heed these words from the Koran: “There is no compulsion in religion,” and “Whatever you may differ about is for God to judge.”
source: TIME Magazine Monday, Mar. 03, 2014 ; Losing Faith By Zoher Abdoolcarim
Posted by STEADYAKU47 at Monday, March 03, 2014