Malaysia's Chinese Made City : Courtesy of Umno the Champions of the Malays!

Planeloads of buyers fly in as condos rise from the sea 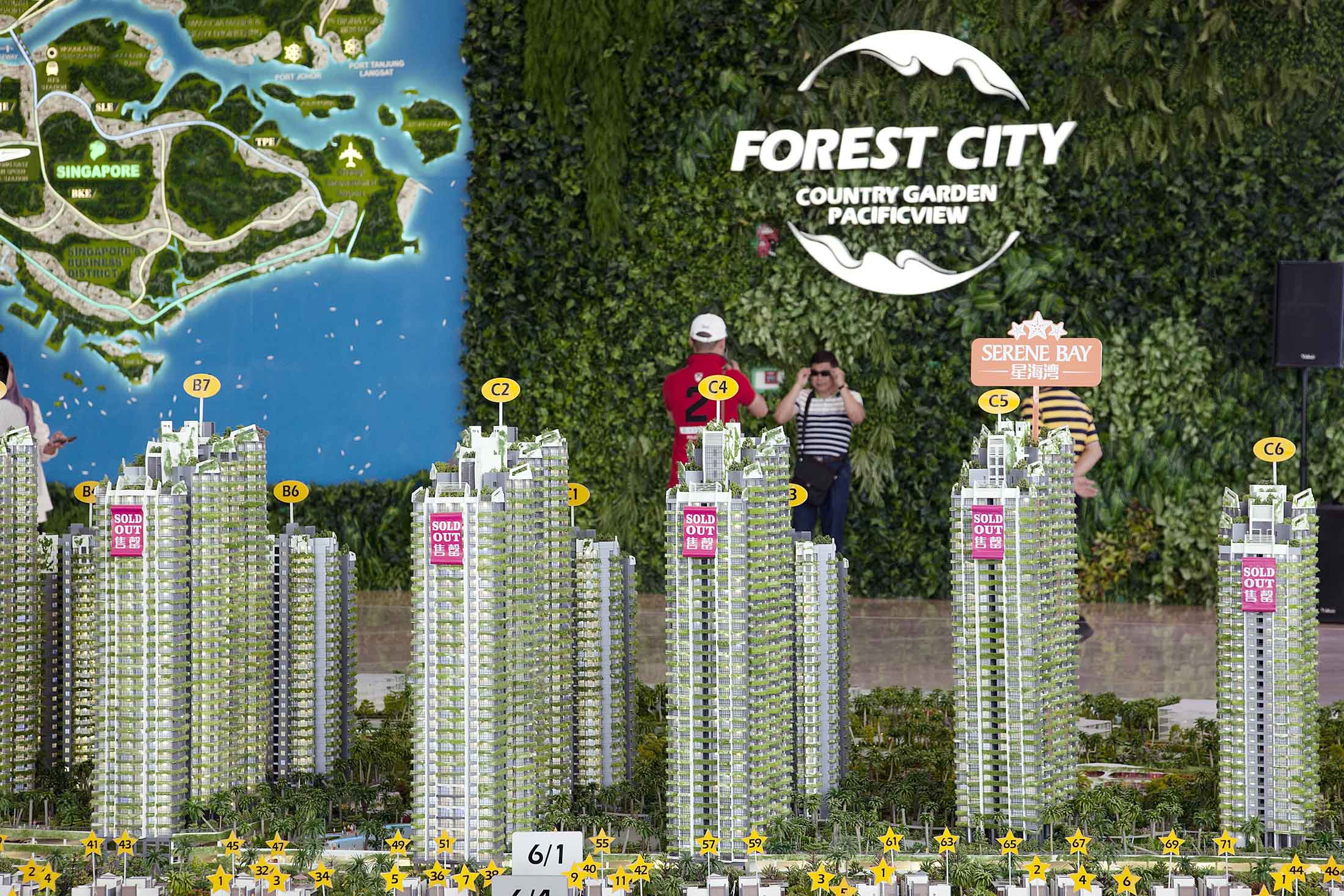 The landscaped lawns and flowering shrubs of Country Garden Holdings Co.’s huge property showroom in southern Malaysia end abruptly at a small wire fence. Beyond, a desert of dirt stretches into the distance, filled with cranes and piling towers that the Chinese developer is using to build a $100 billion city in the sea.
While Chinese home buyers have sent prices soaring from Vancouver to Sydney, in this corner of Southeast Asia it’s China’s developers that are swamping the market, pushing prices lower with a glut of hundreds of thousands of new homes. They’re betting that the city of Johor Bahru, bordering Singapore, will eventually become the next Shenzhen.
“These Chinese players build by the thousands at one go, and they scare the hell out of everybody,” said Siva Shanker, head of investments at Axis-REIT Managers Bhd. and a former president of the Malaysian Institute of Estate Agents. “God only knows who is going to buy all these units, and when it’s completed, the bigger question is, who is going to stay in them?”
The Chinese companies have come to Malaysia as growth in many of their home cities is slowing, forcing some of the world’s biggest builders to look abroad to keep erecting the giant residential complexes that sprouted across China during the boom years. They found a prime spot in this special economic zone, three times the size of Singapore, on the southern tip of the Asian mainland.
The scale of the projects is dizzying. Country Garden’s Forest City, on four artificial islands, will house 700,000 people on an area four times the size of New York’s Central Park. It will have office towers, parks, hotels, shopping malls and an international school, all draped with greenery. Construction began in February and about 8,000 apartments have been sold, the company said.
It’s the biggest of about 60 projects in the Iskandar Malaysia zone around Johor Bahru, known as JB, that could add more than half-a-million homes. The influx has contributed to a drop of almost one-third in the value of residential sales in the state last year, with some developers offering discounts of 20 percent or more. Average resale prices per square foot for high-rise flats in JB fell 10 percent last year, according to property consultant CH Williams Talhar & Wong.
Country Garden, which has partnered with the investment arm of Johor state, launched another waterfront project down the coast in 2013 called Danga Bay, where it has sold all 9,539 apartments. China state-owned Greenland Group is building office towers, apartments and shops on 128 acres in Tebrau, about 20 minutes from the city center. Guangzhou R&F Properties Co. has begun construction on the first phase of Princess Cove, with about 3,000 homes.
Country Garden said in an e-mail it was “optimistic on the outlook of Forest City” because of the region’s growing economy and location next to Singapore. R&F didn’t respond to questions about the effects of so many new units and Greenland declined to comment.

Singapore Draw
“The Chinese are attracted by lower prices and the proximity to Singapore,” said Alice Tan, Singapore-based head of consultancy and research at real-estate brokers Knight Frank LLP. “It remains to be seen if the upcoming supply of homes can be absorbed in the next five years.”
The influx of Chinese competition has affected local developers like UEM Sunrise Bhd., Sunway Bhd. and SP Setia Bhd., who have been building projects around JB for years as part of a government plan to promote the area. First-half profit slumped 58 percent at UEM, the largest landowner in JB.
A decade ago, Malaysia decided to leverage Singapore’s success by building the Iskandar zone across the causeway that connects the two countries. It was modeled on Shenzhen, the neighbor of Hong Kong that grew from a fishing village to a city of 10 million people in three decades. Malaysian sovereign fund Khazanah Nasional Bhd. unveiled a 20-year plan in 2006 that required a total investment of 383 billion ringgit ($87 billion).
Singapore’s high costs and property prices encouraged some companies to relocate to Iskandar, while JB’s shopping malls and amusement parks have become a favorite for day-tripping Singaporeans. In the old city center, young Malaysians hang out in cafes and ice cream parlors on hipster street Jalan Dhoby, where the inflow of new money is refurbishing the colonial-era shophouses.
Outside the city, swathes of palm-oil plantations separate isolated gated developments like Horizon Hills, a 1,200-acre township with an 18-hole golf course.
“The Chinese developers see this as an opportunity. A lot of them say Iskandar is just like Shenzhen was 10 years ago,” said Jonathan Lo, manager of valuations at CH Williams Talhar & Wong, a property broker based in Johor Bahru. “Overseas investors coming to Malaysia is a new phenomenon so it’s hard to predict.”
Construction soon outpaced demand. To sell the hundreds of new units being built every month, some companies took to flying in planeloads of potential buyers from China, prompting low-cost carrier AirAsia Bhd. to start direct flights in May connecting JB with the southern Chinese city of Guangzhou.
On the first such flight, 150 of the 180 seats were taken by a subsidized tour group organized by Country Garden. Almost half of them ended up buying a residence, the developer said in an e-mail.

“A lot of [Chinese developers] say Iskandar is just like Shenzhen was 10 years ago”
Buses disgorging Chinese tourists at Forest City in November were met by dozens of sales agents, with the women dressed in traditional Sarong Kebaya outfits similar to those worn by Singapore Airlines Ltd. stewardesses.
The visitors filed into a vast sales gallery where agents explained the enormity of the project using a replica of the finished town, with model buildings as tall as people. They viewed show flats with marble floors and golden-trimmed furniture, dined on a buffet spread and were encouraged to sign on the spot. A two-bedroom apartment cost as little as 1.25 million yuan ($181,400), about one-fifth of the price of a similar-sized private apartment in central Singapore.
But JB is not Shenzhen. The billions poured into the economic zone in southern Guangdong in the 1980s and 1990s by Hong Kong and Taiwanese firms was soon dwarfed by Chinese investment as factories sprang up all along China’s coast.
In Malaysia, investment growth is slowing, slipping to 2 percent year on year in the third quarter, from more than 6 percent in the previous quarter. The value of residential sales in Malaysia fell almost 11 percent last year, while in Johor the drop was 32 percent, according to government data.
“I am very concerned because the market is joined at the hip, if Johor goes down, the rest of Malaysia would follow,” said Shanker, at Axis-REIT Managers, who estimates that about half the units in Iskandar may remain empty. “If the developers stop building today, I think it would take 10 years for the condos to fill up the current supply. But they won’t stop.”

Property Pipeline
Developers have a pipeline of more than 350,000 private homes planned or under construction in Johor state, according to data from Malaysia’s National Property Information Centre. That’s more than all the privately built homes in Singapore. Forest City could add another 160,000 over its 30-year construction period, according to Bloomberg estimates, based on the projected population.
“Land is plentiful and cheap,” said Alan Cheong, senior director of research & consultancy at Savills Singapore. “But buyers don’t understand how real estate values play out when there is no shortage of land.”
The developers haven’t been helped by government measures designed to prevent overseas investors pushing up prices. In 2014, Malaysia doubled the minimum price of homes that foreigners can buy to 1 million ringgit, and raised capital gains tax to as much as 30 per cent for most properties resold by foreigners within five years.
The stream of new developments has scared away some investors, pushing developers to concentrate more on finding families who will live in the apartments, said Lo at CH Williams. Profit margins have fallen to around 20 percent, from 30 percent when land was cheap a few years ago, according to his firm.
Singapore billionaire Peter Lim’s Rowsley Ltd. said last year it will no longer build homes in Iskandar and will instead turn its Vantage Bay site into a healthcare and wellness center.
“The Chinese players have deep financial resources and are building residential projects ahead of demand,” Ho Kiam Kheong, managing director of real estate at Rowsley said in an interview. “If we do residential in Iskandar, we would be only a drop in the ocean. We can’t compete with them on such a large scale.”
UEM Group Bhd., the biggest landowner in Iskandar, is selling plots to manufacturers to boost economic activity in the area.

“The market is joined at the hip, if Johor goes down, the rest of Malaysia would follow”
“Industries are the queen bee,” creating jobs and wealth for local residents, said Chief Executive Officer Izzaddin Idris. “That will bring a demand for the houses we are building.”
U.S.-based chocolate maker Hershey Co. is among those building a plant in Iskandar, joining tenants such as amusement park Legoland Malaysia and Pinewood Iskandar Malaysia Studios—a franchise of the U.K.-based movie studio.
Meanwhile, sales reps sell a Utopian dream—a city of the future with smart, leafy buildings and offices full of happy, rich residents.
“It will take a while for all the parts to fall into place: infrastructure, manufacturing, education, healthcare and growth in population,” said Ho at Rowsley. “But I have no doubt it will happen eventually.”

—With assistance from Emma Dong.

Email ThisBlogThis!Share to TwitterShare to FacebookShare to Pinterest
Labels: Chinese made city, UMNO