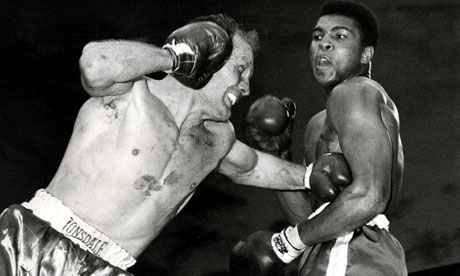 Henry Cooper lands a punch on Muhammad Ali in their heavyweight title fight in June 1963. Photograph: Popperfoto/Popperfoto/Getty Images
Muhammad Ali has led tributes to the boxing legend Sir Henry Cooper,who has died at the age of 76. Sir Henry died at his son's house in Surrey on Sunday, two days before his 77th birthday.
Ali, who was famously floored by Sir Henry but went on to become a close friend, said he was "at a loss for words".
"I was not aware he was ill. I visited with him two summers ago during a brief visit to Windsor as part of the Equestrian Games being held there. He was in good humour and looked quite fit.
"Henry always had a smile for me; a warm and embracing smile. It was always a pleasure being in Henry's company. I will miss my ole friend. He was a great fighter and a gentleman."
Posted by STEADYAKU47 at Sunday, May 22, 2011