In an Australian first, four men have been found guilty of assault after a Muslim convert was held down and whipped as punishment under sharia law.
Christian Martinez, 32, was whipped with an electric cord at his home in Silverwater in Sydney's west between July 16 and 17 in 2011.
His mentor, Wasim Fayed, was accused of carrying out the whipping as punishment under sharia law, while the other three men held Mr Martinez down on his bed.
Fayed, 44, along with Zakaryah Raad, 21, Tolga Cifki, 21, and Gengiz Coskin, 22, pleaded not guilty to charges of assault occasioning bodily harm, causing harm in company and stealing.
Fayed also faced two charges of intimidation.
Magistrate Brian Maloney convicted the men in Burwood Local Court on Thursday.
He will sentence them at a later date.
As Fayed left the court and was bundled into a car, he told reporters, "I love him for the sake of Allah", referring to Mr Martinez.
In 2011, Christian Martinez spoke exclusively to 7News, saying that he wouldn't wish the pain he experienced on anyone.
He said that he was the victim of half an hour's worth of electric cord flogging by four men who broke into his home at around one o'clock in the morning.

"I was screaming, absolutely screaming," Martinez said.
"I can't explain the pain. Horrific. I mean I don't wish it upon anybody."
Martinez's shoulders and abdomen were covered in welts and bruises after the forty lashes that were inflicted on him.
The lashing was said to be punishment for drinking alcohol under the Wahhabist belief system, an extreme variant of Islam.
Martinez claimed his attackers said that the next time he felt like a beer, he would remember the pain, and that he was being punished out of love.
"That's no love," says Martinez.
"I don't hit my wife because I'm upset with her."

Christian Martinez, 32, was whipped with an electric cord at his home in Silverwater in Sydney's west between July 16 and 17 in 2011. Photo: 7News

The local Islamic community condemned the alleged violent act, and were concerned it might damage the broader perception of Islam in Australia.
"It will ruin the picture of Muslims. Islam is calling for peace." Sheikh Yahya Safi, Imam of Lakemba mosque said.
Martinez told 7News he will continue practicing his faith.
"Islam is a beautiful religion. It's a great guideline to life and I will keep being a Muslim," he said.
When asked whether he would ever drink alcohol again Martinez said he wasn't sure.
"I don't know, so definitely if I ever do. I'll always remember the lashes." 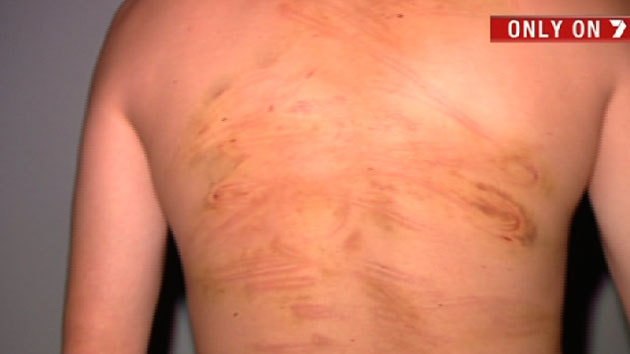 The victim of an alleged 'sharia law' lashing says he wouldn't wish the pain he experienced on anyone.
Like 7News Sydney on Facebook
Posted by STEADYAKU47 at Thursday, February 28, 2013