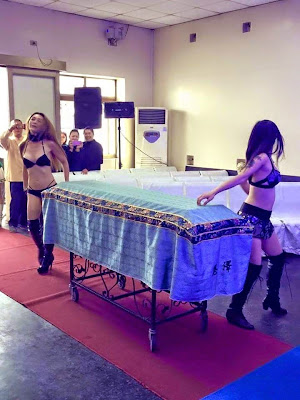 We have seen Chinese mourners pay their last respects at a funeral by lighting incense and bowing to the dead, but something much different happened recently during a funeral in Taiwan.

According to Daily Mail, strippers were hired by a deceased's wife to attend the funeral and put on a sexy dance show around the coffin to act as a final gift to her husband.

Mourners were shocked to see the dancers dressed up in lingerie and boots while they walked up straight to the side of the coffin, putting on a jaw-dropping performance as they danced to Maroon 5's "Moves Like Jagger".


Friends and family of the deceased were extremely shocked, but did not stop the dancers. Instead, they picked up their smartphones an immediately started filming the performance.

Even cars were prepared for an easy getaway for the strippers, just in case the police dropped by.

Mrs Jian, the deceased's wife said that she knew her husband has always admired ladies, therefore, she hopes to satisfy her spouse with this gift before he moves on with his journey.


On the other hand, there were other theories spreading around, saying that the strippers were hired in order to attract more mourners to turn up the funeral, so that more honour will be given to the deceased.

Another theory said that the strippers were hired because the ghosts of the deceased enjoyed watching such sexy performances while they were alive.

Here is a short video of the funeral show!