They are all at it....plundering the bejeezus out of our nation's coffers. Overtly, covertly, legally, illegally, quietly, loudly. In millions and billions. In every which way they can. Politicians, businessmen, bankers, government servants...anybody who can get their snouts in the trough ........the whole damm lot of them....merrily and insanely taking what they can of our money from our nation's coffers. 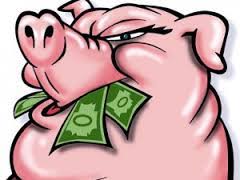 The scale is breath taking. If you think Marcos and Suharto are thieves then what words can you use to describe what Najib & Rosmah are now doing?  The world has not seen anything  on the scale of what is now happening in Bolehland! Hundreds of millions of ringgits are being handed out to individuals by the stroke of a pen! Many billions are being "invested" by resolutions passed in the numerous boardrooms of statutory bodies tasked with managing the nation's billions....all complicit in the grand design perpetrated by Najib & Rosmah : that of taking for themselves, and anyone else with their snout in the trough, billions by fraud,  stealth and thievery.


At the very apex of this mad Ponzi Scheme sits that prime minister that embarrass me....Najib Razak and his wife. The money does not come from legitimate business activities or from profit of financial trading....no Sir...it comes from sleight of hands and paper work that transfers funds from legitimate investments into the accounts of individuals complicit in what their religion forbids them to do...cheating, scamming and out right fraud.


How is this possible?

Where are the checks and balances that should have stopped these abuses of political power and complicity by so many of our finest in the vast conspiracy to defraud our people, our nation and the future of our children? Where indeed!


What Saundra Rafizi have told us recently about that Hotel bought with our money ...FGV's money, and then transferred into some BVI entity, is but the tip of the bloody iceberg!

But all of this .....every one of them...like 1MDB...like those business opportunities coming from China, that trip to help the US....all of them goes all the way back and then all the way up to......Najib Razak! Prime minister extraordinaire of Boleh land where everything is Boleh!


Right now I am writing on adrenaline alone. I am angry, upset, seething...all these emotions are within me as I think of what Najib Razak has done for himself at our expense...and more of concern...the thousand of Malays he has taken on to this audacious greed trip that defies any attempt by any rationale, for anyone to comprehend.


What need is there for anyone to want billions? Not millions, not hundred of millions ...but billions of ringgit that belong to others? Bill Gates made his fortune from Microsoft. Trump from property and his ability to come on to the winning side of any deal he cares to enter into. The late Yeoh Tiong Lay from construction. Where does Najib fortune comes from? The same place from where the thousand of Malays who have become fraudulently and insanely rich, got their money from! From the Rakyat. From you and me!


Ponder that all you Umno idiots that are prepared to fight tooth and nail to keep Najib as their president!


Ponder that all you BN affiliates as you pick up the dedak thrown at you by Najib.

Ponder that all you descendants of Tun Razak Hussein....and as you ponder, forget not that karma is nigh. A few more months and judgement day will arrive. You can run to parts unknown and draw upon that off shore account in which you have already parked your ill gotten money....but you will have to keep looking over your shoulders all the time waiting, waiting, waiting for your day of reckoning when the law finally catches up with you.

Stealing from the Rakyat is not for the faint hearted.

However much, money can do in providing for your material wants, your heart will always beat with the certainty that what you have done in taking money that does not belongs to you....is wrong! Today many many Malays are beginning to ask themselves if what they have been prepared to do to become "rich" is worth the eternal damnation that they have placed themselves in.

1MDB is just the tip of the iceberg. Even if 1MDB had made a few individuals insanely wealthy, all of them can be counted on the digits of your hands and feet. What is to come will involve Malays who are not that far removed from you. Your relatives, your own father and mother, northers ...even sisters! Some would already have bought properties abroad in anticipation of having to make a run for the hills when Najib Razak is removed from office. Those who have off shore accounts from where they have been drawing from time to time, will think themselves  set up for life in the belief that if anything happens, they have a nest egg of illicit funds stashed in parts unknown. Ninety nine percent of these robbers and thieves are Malays and all are beholden to Najib Razak & Rosmah...and that is why Najib is still where he is in Umno and in Putrajaya. What happens when Najib & Rosmah will themselves,have to run for the hills?

Najib is a spent political force.  Rosmah is a fat bitch with no redeeming values. It is in the nature of Umno politics that any one who becomes an electoral liability is first given the option of a graceful exit. This, I am told, will not be the case for Najib Razak & Rosmah. The contempt for them within Umno is palpable. When Umno has decided that Najib  & Rosmah will go, their departure will be a surgical incision that will see them take the first available flight out of our country lest the demand for their incarceration becomes too insistent for Umno and his successor to ignore.

And I have it on good authority that that time nears with a certainty as death will come to all of us sooner or later. For Najib & Rosmah, it will be sooner!

Email ThisBlogThis!Share to TwitterShare to FacebookShare to Pinterest
Labels: malays are now thieves