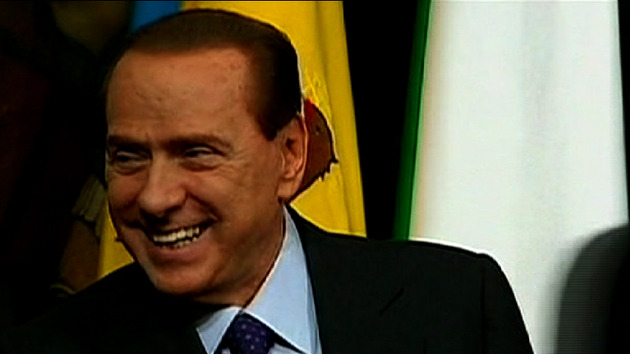 By Manuela D'Alessandro
MILAN (Reuters) - An Italian court sentenced ex-Prime Minister Silvio Berlusconi on Thursday to one year in jail over the publication by his family's newspaper of a transcript of a leaked wiretap connected to a banking scandal in 2006.
Under Italian law, the 76-year-old media billionaire would not have to serve any jail time until the appeals process has been exhausted, and a higher court could overturn the ruling.
However, judicial sources said the charges will expire in mid-September, before an appeal trial can be completed, because of the statute of limitations. So no matter what happens in the appeal, it is unlikely that Berlusconi would serve time in jail.
The verdict came in the midst of a political impasse arising from last week's election which left no party able to form a government on its own, although Berlusconi's centre-right formation emerged as the second strongest in parliament.
Berlusconi is embroiled in a series of trials, with separate cases over charges of tax fraud and paying for sex with an underage prostitute due to wind up this month.
Following Thursday's verdict, he repeated denials that he was in any way connected with wrongdoing and said the decision showed that politically motivated judges were conducting a campaign against him.
"It is impossible to tolerate judicial persecution of this kind which has been going on for 20 years and which re-emerges every time there are politically complex moments in the political life of our country," he said in a statement.
On Tuesday, Berlusconi said supporters of his People of Freedom party would hold monthly rallies against what he describes as politically-motivated trials.
BROTHER SENTENCED TO TWO YEARS
Berlusconi's brother Paolo, publisher of the family-owned Il Giornale daily, was sentenced to two years and three months over the same case, which centred on confidential wiretap transcripts related to a bank takeover which appeared in the newspaper.
The court awarded 80,000 euros (69,670 pounds) in damages to Piero Fassino, who was head of the main centre-left party at the time of the incident and whose remarks were picked up on the wiretap and published in the newspaper.
Fassino asserted that Il Giornale published the transcripts shortly before the 2006 election to create the impression that he had exerted improper pressure in the attempted takeover of Banca Nazionale del Lavoro by insurer Unipol in 2005.
Late on Wednesday, Italy's highest appeals court upheld a ruling clearing Berlusconi of tax fraud in connection with his Mediatrade broadcasting rights firm.
The decision cleared Berlusconi of accusations that Mediatrade, the broadcast rights unit of his Mediaset group, acquired film and television rights at inflated prices to evade 10 million euros in taxes in 2004.
His trial on charges of paying for sex with a juvenile prostitute is expected to wind up in coming days while a separate trial over broadcast rights is expected to conclude toward the end of the month.
Berlusconi's lawyers on Thursday asked the Milan court to postpone a hearing in the sex trial scheduled for Friday, saying that the four-time premier could not be present due to "a serious problem with his vision", legal sources said.
Despite his relative success in the election, Berlusconi's prospects of a return to government have been held back by the refusal of centre-left leader Pier Luigi Bersani to accept a "grand coalition" with his longstanding rivals.
(Additional reporting by Sara Rossi in Milan and Virginia Alimenti in Rome;p Writing by James Mackenzie; Editing by Michael Roddy)
Posted by STEADYAKU47 at Friday, March 08, 2013