A helicopter has crashed in central London.
Emergency services were called to the scene, near the River Thames at Vauxhall, after reports that the aircraft had hit a crane and cartwheeled before bursting into flames.
A plume of smoke billowed into the sky above the area this morning (local time).
Fire and rescue services said they were taking “lots of emergency calls” as eyewitnesses described seeing grey smoke towering into the sky, close to Battersea Bridge, in Vauxhall.
A London Fire Brigade spokesman was unable to give details but said: “We are taking lots of emergency calls at the moment”.
A Met police spokesman said: “We had a call at approximately 8am (1900 AEDT) this morning and we are dealing with an incident.
“We are still waiting for some further details at the moment.”
Eyewitnesses took to Twitter to report details.
One said the helicopter appeared to have hit a crane.
Another said it crashed close to a railway line.
One user posted a dramatic photograph showing burning wreckage in the road.
Video footage shot on a mobile phone showed an entire road blocked by burning wreckage and aviation fuel.
The side of a building on one side of the street was also damaged by the flames. Passers-by stood watching as the wreckage burned.
A motorcycle was also lying on its side in the road having been abandoned.
One eyewitness reported seeing cars on fire and hearing people screaming.
The helicopter apparently hit a crane on top of a building, Scotland Yard said.

The scene of a helicopter crash in central London. Picture: Nic Walker/Twitter 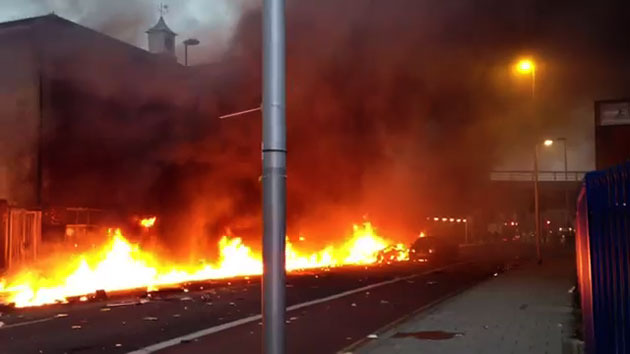 Fire has engulfed a London street after a helicopter reportedly clipped a crane and spiralled into the ground where it burst into flames.
Two people have been confirmed dead after a helicopter went down in a fiery crash in central London.

The stricken aircraft cartwheeled to the ground after hitting a crane by the River Thames and exploded into flames before crashing into a street during rush hour.
Unconfirmed early reports said one person was on board, the pilot. Two people have since been confirmed dead by Scotland Yard.
Burning wreckage and aviation fuel covered the road as eyewitnesses reported seeing cars on fire and hearing people screaming.
The Metropolitan Police confirmed that the helicopter had crashed. London Fire Brigade said the crash happened in South Lambeth.
Witnesses posted photographs of burning wreckage on social networking sites.
Paul Ferguson, who was working in an office near the incident, told BBC News: “There was a flash and the helicopter plunged to the ground. It exploded and you can imagine the smoke coming out of it.”
Sarah-Beth Casey lives in an apartment near the incident.
She told Sky News: “When I heard the explosion - it was like a little earthquake.
“It was like a gas explosion. I looked up to see debris falling off the tower.
“I can’t see any people on the ground, it seems to be a lucky escape. The police and ambulance response was incredible.”

The chopper struck a crane before bursting into flames. Picture: Getty Images


Erin Rogers was waiting at a bus stop outside Vauxhall station.
He told BBC News: “It was a bit surreal actually. I just had a coffee in my hand, I looked up, heard a bang and saw bits of crane debris falling to the floor.

Onlookers at the scene of the chopper crash. Picture: AP


“Then the helicopter was in flames. The rest of the people at the bus station were looking on going ’What was that?’.
“It’s something I will never forget for a long time.”
Chris Yates, an independent aviation expert, told Sky News: “Helicopters are not supposed to come within 500 feet (152 metres) of any structure such as a high-rise building, so we don’t know what caused the pilot to get quite so close.
“We don’t know the circumstances he was operating in at the time - whether there was a problem with the helicopter itself, whether he misread his instructions or received false instructions from air traffic control.”
Unconfirmed early reports said one person was on board, the pilot. Two people have since been confirmed dead.
London’s Metropolitan Police said the helicopter was not one of its aircraft.
“We had a call at approximately 8am this morning and we are dealing with an incident,” a police spokesman said.
The crash was causing long tailbacks on roads during the morning rush hour.

The scene of a helicopter crash in central London. Picture: Nic Walker/Twitter
Posted by STEADYAKU47 at Wednesday, January 16, 2013