One Child out of Wedlock and Young Malay girls made pregnant....and now a Minister in PM department!

steadyaku47 comment:
I wrote this in 2009 and this Shahidan is now a Minister in the PM department? Huh! 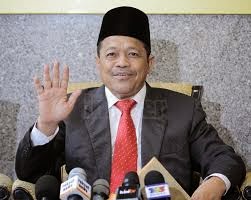 I was going through what I have written in the past and came across this letter I sent to some friends. Bear in mind that the letter was written in September 2008 – almost a year ago when Pak Lah was still Prime Minister.
Friends, I woke up this morning and as is my habit, started to surf the net and read this on Mahathir's blog:  "Laporan Utusan Malaysia semalam (Sept 23, 2008) amat menggembirakan saya. Sahabat saya Dato Seri Shahidan Kassim, Menteri Besar Perlis yang gagal menjadi Menteri Besar walaupun Perlis di antara negeri yang menang dalam pilihanraya 2008 telah dilantik oleh YAB Dato Seri Abdullah Ahmad Badawi, Perdana Menteri Malaysia untuk menjadi penasihat dan pembantu beliau dalam mencapai visi serta misi Wilayah Ekonomi Koridor Utara".
My first respond was "What the mother fucking hell is Abdullah Badawi thinking in appointing this Shahidan scum as his advisor and assistant to the Wilayah Ekonomi Koridor Utara?"..but good manners and decency required me to tone that down to "What is Abang Lah doing appointing a corrupt, womanizing son of a bitch to that post?" Woe betides the future of the Northern Economic Corridor.
A few days before the last election (the one that UMNO/Barisan "won" !!!) - Radzi (then UMNO's Sec Gen), Azmi Khalid and that Politician who also happens to be the brother of the Raja of Perlis (sorry his name escapes me) went to Abdullah Badawi's house at Sri Perdana bringing with them a Lady doctor from Perlis and a Lady with whom Shahidan had a son out of wedlock. While the Prime Minister sat in stunned silence the Lady Doctor narrated that there had been a number of young girls from Perlis she had performed abortions on - Shahidan made these girls pregnant - yes the same Shahidan Kassim who was then the Mentri Besar of Perlis! He had even visited these girls in the evenings after the abortions. His then Police Bodyguard gave money to these girls and other girls. The Lady accompanying these three messengers (Radzi, Azmi and that guy) had had a long relationship (of the sexual kind) with Shahidan and it had resulted in a child born out of wedlock many years ago. Realizing that Shahidan will not fulfill his obligations to marry her - she had cut him off and come to Kuala Lumpur to inform the Prime Minister of same.
What did our Prime Minister do? He shot the messengers!!! Radzi lost his job (to be replaced by a clown!! whose legal reputation is about to be shattered), Azmi is no longer a Minister and the other guy..I am not to sure of what happened to him. Shahidan almost continued as Mentri Besar and still aspire to that post - in fact if KJ had his way, Shahidan would still be Mentri Besar - and Abang Lah agreed but there must have been a trade off to sack Shahidan after he sacked Radzi. Yes Radzi did not resigned - he was asked to go.  If the PM continues with these stupid act of appointing scums on the advise of KJ and what have you's in UMNO - then God help us all. Cukup lah Abang Lah - resign and go and make your peace with God - you have some catching up to do.
Posted by Hussein ABDUL HAMID at Friday, August 21, 2009