How, my dear Shahrizat, will the Malays have any dignity left if you are in government?

"Picking the opposition means selecting DAP to become the government... if we look at the DAP-led government in Penang...which spelled the end of the road and dignity of bumiputeras, specifically the Malays there," she said.

Shahrizat speaks of dignity for the Bumiputras, how my dear Shahrizat, will Malays have any dignity left if YOU are in government?

This is the same Shahrizat whose family used many many millions of the rakyat money to buy condominiums and land in Singapore and Kuala Lumpur and an expensive Mercedes
for themselves.

The same Shahrizat whose husband and children paid themselves many hundreds and thousands of ringgits monthly to manage a failed public funded cattle-rearing project.

The same Shahrizat whose husband has been charged for corruption in handling the RM250 million soft government loan meant to develop the cattle project. The money was  instead used to "develop" the living standards of himself and his family...who also happens, surprise surprise, to also be Shahrizat's family!

The same Shahrizat who had stepped down as a "responsible member of the cabinet" but who had also promptly accepted another appointment in the same government as advisor on women's affair to najib razak.

So this dignity that you speak of for the Bumiputra does not include what your family has done to Bumiputras? 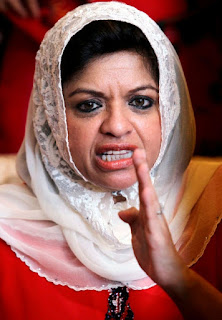 My dear Sharizat you have not grown old graciously. If you do not watch what you do in public and privately, you will find yourself in the likeness of the pig and the mule. The pig's greed you already have while the mule likeness becomes you with each passing day.

Do not worry about the dignity of the Malays. What you morons in umno do in the name of Malay dignity already burdens us Malays much too much each and every day.

Like the Attorney General and that tweet of an IGP, go lick najib's a**e for you all are beholden to that wife of rosmah for your daily bread. Go look for ways and means to address your greed and avarice...but do not think yourself as the guardian of Malay dignity. You do not even know or understand what dignity means....but let me tell you that it certainly does not mean you claiming not to know what your husband and children do with the millions belonging to the rakyat!