Singapore helped US and Australia tap telecommunications links in Asia.

Foreign ministry acts after reports that Singapore helped US and Australia tap telecommunications links in Asia. 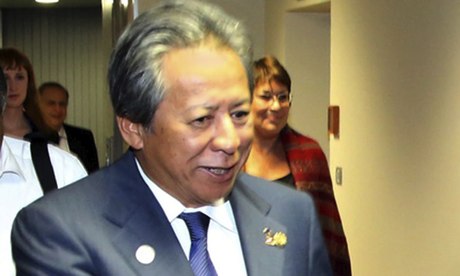 Anifah Aman: 'If those allegations are proven, it is certainly a serious matter that Malaysia strongly rejects and abhors.' Photograph: CHOGM2013
Malaysia's foreign ministry has summoned a senior Singaporean diplomat over allegations that the city-state helped the US and Australia tap telecommunications links in Asia for espionage purposes.
Singapore's government has not publicly responded to the allegations, which were published on Monday in Australia's Sydney Morning Heraldand cite documents from National Security Agency whistleblower Edward Snowden.
The Malaysian foreign minister, Anifah Aman, said in a statement that his ministry was seeking clarification from Singapore's high commissioner to Malaysia.
"If those allegations are eventually proven, it is certainly a serious matter that the government of Malaysia strongly rejects and abhors," Anifah said. He said spying against a good friend and neighbour was unacceptable.
Anifah's ministry earlier this month protested to US and Australian embassy officials over accusations that their diplomatic missions house surveillance equipment used to collect electronic communications.
The Sydney Morning Herald report said an NSA map published by Dutch newspaper NRC Handelsblad this week confirmed that Singapore played a role in helping the US and other intelligence partners tap undersea cables.
Similar spying allegations rocked relations between Indonesia and Australia this month, with Jakarta recalling its ambassador, downgrading relations and suspending co-operation on people-trafficking after claims of Australian tapping the phones of Indonesia's president, his wife and eight Indonesian ministers and officials in 2009.
Posted by STEADYAKU47 at Tuesday, November 26, 2013