Tunisia's first lady was said to be manipulative and ruthless 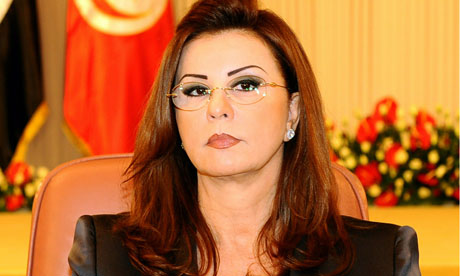 Leila Trabelsi fled Tunisia with $50m worth of gold bars.
Every revolution has its femme fatale, the Lady Macbeth figure blamed and vilified – fairly or unfairly – for the woes of a downtrodden nation. The Philippines had Imelda Marcos, criticised for her shoe fetish; Romania had Elena Ceaucescu, who pretended to be a scientist; France had Marie Antoinette.
As the jasmine revolution unfolds in Tunisia, the sinister game of "cherchez la femme" is being played once more. This time the target is the country's first lady, Leila Trabelsi, second wife of the deposed president Zine al-Abidine Ben Ali.
If Ben Ali was despised by many in Tunisia, Trabelsi, it seems, was truly hated. Wives of overthrown leaders are usually reviled for their love of luxury and designer clothes or shoes – Marcos had 2,700 pairs – but Trabelsi, an elegant 53-year-old, appears to have gone even further, with unsubstantiated reports that she fled Tunisia last week with more than $50m worth of gold bars.
"True or not, it's very believable. That's the sort of thing Leila Trabelsi would do," French writer Catherine Graciet, co-author of a book on Tunisia's first lady, told the Guardian. "What's more, she wouldn't have the slightest qualm about doing it."
Trabelsi was brought up with 10 brothers in the heart of the Tunis medina, the daughter of a fruit and nut seller. She was working as a hairdresser when she met her future husband and gave birth to their first daughter while he was married to his first wife.
When Ben Ali took power in 1987 he obtained a divorce and wed Trabelsi, who allegedly set about installing members of her family in positions of power. In the decades that followed the Trabelsi name became synonymous with the corruption that riddled Tunisian society and business, and a byword for shameless greed and excess – a son-in-law reportedly kept pet tigers in his garden, which he fed cuts of prime beef.
"Whether it's cash, services, land, property, or yes, even your yacht, President Ben Ali's family is rumored to covet it and reportedly gets what it wants," said a US government cable revealed by WikiLeaks recently.
Another stated: "Often referred to as a quasi-mafia, an oblique mention of 'the Family' is enough to indicate which family you mean. Seemingly half of the Tunisian business community can claim a Ben Ali connection through marriage, and many of these relations are reported to have made the most of their lineage. Ben Ali's wife, Leila Ben Ali, and her extended family – the Trabelsis – provoke the greatest ire from Tunisians."
Graciet, whose book La Régente de Carthage, written with Nicolas Beau, is being quickly reprinted, says Leila Trabelsi's reputation, and that of her relatives, is deserved. "She was extremely powerful in running her family and ensuring they had their hands on very large parts of the economy. She also had political powermaking decisions about government posts and firing ministers."
She concludes that Trabelsi was a "Machiavellian figure . . . intelligent, ambitious, calculating, manipulating and utterly without scruples or morals.
"In short, she was absolutely fascinating!"

Position:
Wife of the Prime Minister of Malaysia
Country:


Malaysia
Datin Paduka Seri Rosmah Mansor holds a Bachelor’s degree in Sociology and Anthropology from the University of Malaya and a Master’s degree in Sociology and Agriculture Extension from Louisiana State University. She served at the Agriculture Bank of Malaysia until 1983, and then as Business Development Manager at Island and Peninsular Berhad where she served until 1987.
Today, as the wife of the Prime Minister of Malaysia, Dato Sri Mohd Najib bin Tun Haj Abd Razak, she is a patron of various associations and charities. She serves as President of the Welfare Association of Minister’s Wives (BAKTI) and President of the Girl Guides Association of Malaysia. She is also a Patron of the Malaysia AIDS Council, the National Heart Institute Foundation, the Foundation for Underprivileged Children and the Badminton Association of Malaysia.
Datin Paduka Seri Rosmah Mansor strongly believes that human capital development begins with children and is an important investment for the nation. She has been actively engaged with PERMATA, a program for early childhood education and care. The program has been expanded to involve gifted children in the performing arts and in formal study of the Quran and the Sunnah to prepare them as future Islamic scholars. Beyond her concerns for the welfare of children, she is also passionate about women’s issues and in advancing youth at risk.
Datin Paduka Seri Rosmah Mansor has been recognized for her many contributions through various national awards and has received several honorary degrees.
other references:

Rosmah Mansor | MoCS
http://www.mocsarawak.wordpress.com/c...
Mar 31, 2013 -- Posts about Rosmah Mansor written by mocsarawak. ... By CT Ali To indulge in black magic, one must be mindful of its pantangs and must ...

Rosmah and black magic? No way! | Free Malaysia Today
https://www.google.com.my/url?sa=t&am...
Mar 31, 2013 -- Black magic would also require Rosmah to be subservient to her bomoh. ... not forgetting nearlly all UMNO leaders practise this. many times we ...

'Rosmah dabbles in witchcraft' | Free Malaysia Today
https://www.google.com.my/url?sa=t&am...
Feb 15, 2013 -- PETALING JAYA: Bizzare black magic rituals and an insatiable appetite for wealth. These were some of the revelations of Deepak Jaiskishan ...

THE OCCULT CHICKENS HAVE COME HOME TO ROOST ...
https://www.google.com.my/url?sa=t&am...
Jul 10, 2011 -- The rituals performed by Master Ji are to cleanse Najib and Rosmah of spells and charms placed by ... of the ancestors, as well as a time for occult practices. ... Since early May 2011, charges of sorcery, witchcraft, and using ...

Altantuya chapter closed with Bala's death? | Free Malaysia Today
https://www.google.com.my/url?sa=t&am...
Mar 24, 2013 -- Deepak had also revealed that Rosmah practiced witchcraft and had placed Najib and almost all cabinet ministers under her spell. Now that ...
the witch's broo: First Lady Rosmah. So What's The Problem?
witchbroo.blogspot.com/.../first-lady-ro­smah-so-whats-proble...Oct 25, 2010 -- First of all, I so apologize for not blogging. I've been such a twitfreak that I've forgotten I had a blog. Oh yez! I have a blog, haven't I? Now, I want ...