Jafwan Jaafar
March 25, 2016
Soaring above the trivializing, tiresome cliché of “Behind every great man is a great woman”, the wives of Malaysia’s six Prime Ministers stood/stand tall on their own, behind absolutely no one

Tun Endon and her identical twin sister, Noraini, were born in Klang in 1940 to a Japanese mother and Malay father (Datuk Mahmood Ambak). Along with 9 other siblings, the twins spent much of their childhood in Kampar, Perak, where their Department of Mines employee father was posted. Tun Endon first attended Kampar’s Anglo-Chinese School, before continuing her education at the venerable St Mary’s School in Kuala Lumpur. She began her career in the early 1960s, entering into civil service at the Federal Establishment Office, where she worked until the mid 1970s.
Marriage:

It was while on the job that Tun Endon crossed paths with a young Tun Abdullah, who had just joined the Malaysian Administrative and Diplomatic Corps after graduating from University of Malaya with a B.A. in Islamic Studies. Following a brief courtship, the two were wedded in 1965. Tun Endon continued her career in the civil service, as her husband rocketed through the political ranks, clinching the weighty roles of Director of Youth at the Ministry of Youth and Sports, followed by Secretary of the National Operations Council. After years of dedicated service, Tun Endon bid adieu to the Federal Establishment Office upon her husband’s election as Member of Parliament for Kepala Batas in 1978. In 2003, one year before Tun Abdullah took on the paramount role of Prime Minister, Tun Endon was shatteringly diagnosed with breast cancer – the same disease her twin sister was already battling and would shortly succumb to. In spite of years of aggressive treatment both in Malaysia and the US, Tun Endon was felled by the disease in 2005, passing away in the Prime Minister’s residence in Putrajaya, surrounded by family. Her funeral was nationally-televised, and a public holiday and state of mourning was observed four days later.
Children:

Tun Endon and Tun Abdullah have a son, business tycoon Datuk Kamaluddin Abdullah; and daughter, Nori Abdullah, Chairman of Penyayang and wife of the Minister of Youth and Sports, Khairy Jamaluddin.
Legacy:

Tun Endon spearheaded a range of charity initiatives which benefitted children as far afield as North Korea and Bosnia-Herzegovina. Her greatest contribution is perhaps to traditional Malaysian arts and crafts – in particular, her beloved batik, which she championed as an invaluable cultural heirloom. Tun Endon’s Malaysian Batik Movement has contributed tremendously towards raising awareness and standards of the local batik industry.

As I was surfing the net a few minutes ago, an image from a distant past came into my sight. 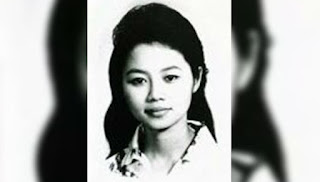 Endon...Kak Endon....her father Mahmood Ambak and my mother, Zaharah Ambak were brother and sister...same father, same mother...for you see their father had a number of wives....and no, I did not get to meet Ambak. I believed he was long deceased by the time I was born.  My late father and mother were firsts cousins...so Endon's family and mine were doubly linked by marriage and through the ages, by descending from the same line of Bugis lineage.


There are many memories I have of her and of her family - her parents are people generous to a fault. Her mother, Mak Teh, a consummate host that welcomes you with a wonderful smile, her father with a melodious voice that can sing Besame Mucho much like those Cubans of old did.


Pa Ngah Che Mood, as we know him, was an Uncle quick to make you smile and laugh...and what stays in my mind of him is that mischievous look he always has on his face....and at the drop of a hat, he is ready to pull your leg for a laugh.

Theirs  was a big family...eleven children if my memory serves me right. Ani, Endon, Aiza, Noni, Rahmah were the girls. Khalid, Taib, Fadil, Latif, Osman and Hanif...the boys. I smile thinking of the times we had on the occasions that we meet.

Let me tell you about Endon's generosity to me. This was at a time when Abang Lah was already DPM but still staying at Jalan Bellamy.

I had come back to KL, while my family stayed behind in Adelaide, to see if there was anything I could do in KL. I was alone, lonely and without much money living in a room on top of a shop house near the Perkim Building.

Endon heard about the situation I was in.....she called me and asked me to come over to the house for lunch. We were joined by Abang Lah at lunch.  it was a quick lunch for him because his car was already on the way to pick him up for office....and we stopped lunch momentarily to see him off to office. As his car arrived who would I see sitting in the back but ABO - Abdullah Omar - an old friend now long gone - but at that time who in KL did not know of him! We greeted each other warmly for it has been sometime since we last met and soon he and Abang Lah were off. It was only then that Endon told me that ABO is their besan....his daughter is Kamal's wife. Small world.

After lunch Endon put together many tins of biscuits and snacks for me to take home for she knew too well, my dire financial straits. And then she took six decent batik shirts belonging to Abang Lah (which she told me he no longer uses) and gave them to me so that I would have something decent to wear. Anybody who knows Endon knows that is Endon to a T. Generous, caring and always doing what she can to help others.

When I saw that image of the Endon that I had known many many years ago.... it was all I could do to stay my heart from feeling too sad for her because her life has been good for many others. We should instead think of the many people that her life had touched and made better. Mine for one...and for that we will remember her with much affection. Terima Kasih Kak Endon....