Najib and Rosmah inherited an Umno where Cash is King. ...and they both laughed all the way to the Bank!

And that line from the Nursery Rhyme, "Sing a song of Sixpence," came to mind "The king was in the counting-house, counting out his money" and that thought made me smile..... to count my money would take maybe just one shake of the Flying Hippo's tail. I figure out that Najib would need more days then there are in a year, to count his!

A billionaire for a prime minister! And a Malay to boot! Muslim too, just in case anybody is wondering.

Most of that working life spent in politics. Umno politics!

Before Mahathir's time I had not heard of any of our serving PM, or their family, living beyond their means. Tunku, Tun Razak and Tun Hussein Onn, in all the time that they served our nation, in as far as I know it, all lived within their means and when they left office, they left with fame but not fortune.

There were some questions asked about Tun Razak's and Tun Hussein's father-in-law, Noah Omar, forming Genting Highland Berhad with Lim Goh Tong that led to the formation of Malaysia's only casino....but little else.

Throughout his time as PM, Mahathir did ensure that his own children were not in politics....but already we were hearing about the wealth of his brother-in-laws - especially Razali Ali, the ex MB of Selangor....and when Mahathir quit as PM, the ability, alacrity and audacity of his own children ability to accumulate businesses that made them insanely wealthy, made many questioned what links these businesses had to the fact that their father was Mahathir Mohammad - ex PM of Malaysia.

Pak Lah time as PM saw the rise and rise of his own  and extended family in questionable businesses ventures that could directly be linked to Pak Lah's position as PM.....businesses valued in the hundreds of millions....and the rise and rise of his son-on-law, Khairy Jamaluddin, politically and financially. All this contributed to Pak Lah's early political demise when he had to leave office before the end of his term of office.

What was different about Mahathir, Pak Lah and Najib was in the manner each chose to deal with corruption and money politics in Umno.

And so after Mahathir and Pak Lah, Umno was  already a den of thieves robbers where everyone that could, would jostle, push and shove their way to the gravy trough and partake of anything that can come their way by hook or crook. 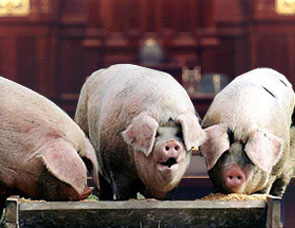 Now while they were all pigs at the trough partaking of the gravy that Umno kept shovelling into the trough....some pigs were more equal than others. 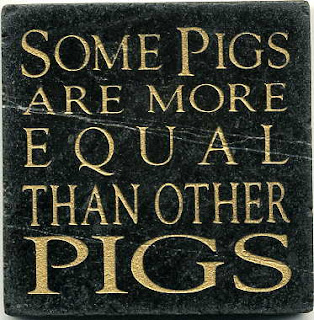 Together they decided ....why should anyone else become rich on account of them?

Why not they become rich themselves....and they both then proceed to do just that : become rich, very very rich....billionaire rich!

For us Malays, for Muslims, for Malaysian and even for politicians in Malaysia....this is something we are all trying to wrap our mind around. To paraphrase Mahathir who recently said "I did not expect a Prime Minister to steal."  Well Tun, with all due respect, you took the words right out of my mouth. Neither did we. Not only did Najib steal, he robbed us all blind, lied, cheated and scammed us out of those billions that he now has.

And all this he did as president of Umno. I guess what they say about the evolution of human intelligence in Umno having stopped some time back has to be true...it did stopped some time ago....just about the time that Mahathir was about done with his time as PM.

It is our burden that the present prime minister has taken it upon himself to continue the legacy of money politics started, tolerated and even at times, encouraged by Mahthir and Pak Lah.

What Najib is doing different is simply this : He and Rosmah have decided that they will be the first to partake of the gravy being shovelled into the trough by Umno......and who among you all can fault him for that when those before him, and we all too, have been complicit in making it possible for him to do so?