There are many things you can say about boxing champions. Tyson's fury was frightening to witness. George Forman was a hulking giant who destroyed opponents  with an ease that defies logic. Joe Frazier...he was the man who stopped Ali...and of course Ali was the Greatests. All of them, at one time or another, were world champions...so what defines these individuals who are champions?

That was answered for me by this Chinese Ministry of Sports official (whose names escapes me for now!) in Penang when I was talking with him about the boxers he was then training.many years ago. I asked him what does one had to have to be a boxer? He said for someone to be a boxer......more than anything else....he must have courage!

And courage is what Anwar Ibrahim has by the bucket full! In everything that he did, he led from the front. While I was starting my first job at MNI as an Underwriter he was already about to be arrested under the ISA and would spend 20 months at Kamunting. 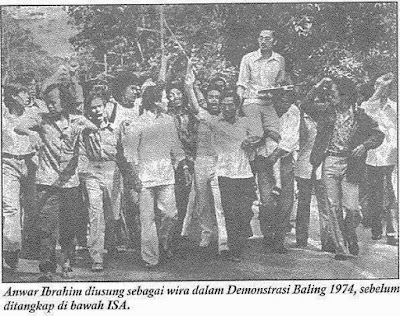 And since then his life has been for all of us to witness as he faced one challenge after another, peaks and lows, triumphs and failures, successes that would have satisfied any mortal but not Anwar and he has experienced the depths of despair that would have broken any other mortal, but not Anwar. In all this, you can say many things of Anwar but you cannot say that he lacked courage in the things that he has done. 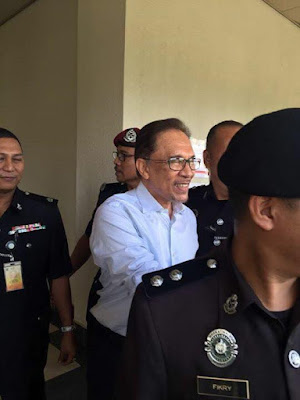 I ask that you all think deeply of all that this man had endured in order that he can continue his fight against a corrupt and arrogant Umno from within Malaysia.

When he could be a free man elsewhere, he chooses to face trial and the certainty of conviction and incarceration within Malaysia.

Everything that he has done in his public life required courage. Everything he wants to do now with Mahathir will require more courage.....and courage Anwar and Mahathir do have.......against a Bugis Warrior who thinks that courage can be bought!

As brother Fauzi Rahman have said, pesan DSAI di mahkamah tadi ...mahu kita "move forward".....and that "kita" is you, me and all of you who knows that the time to move against Najib, Rosmah and Umno is NOW. Jom kita "move forward!".