Myanmar : Najib Razak : Genius has it's limits. Stupidity has not!


steadyaku47 comment : Any abuse of human rights should rightly be condemned by all right thinking people. The situation in Myanmar is for the Government of Myanmar to manage - and if the Rohingyas have been mistreated in any way at all, it would be for the United Nations and other responsible NGO and activists to do something about it.....not the prime minister of Malaysia in tandem with PAS to make political gain out of the sufferings of the Rohingyas (if any) or the lack of action by the Myanmar government (if any). Tapi nasi sudah jadi bubur....this idiot who is NOT my prime minister has done what no responsible and right thinking prime minister should do...interfere in the internal affairs of a sovereign nation for personal and political gain. As they say....Genius has it's limits. Stupidity has not!


The people of Myanmar are not amused at the antics of this idiot of a prime minister - Najib Razak. Can you blame them? Let us see when Najib will let the dogs put - aka Jamal Jamban and the Red Shirts - to again save the Maruah of the Malays! 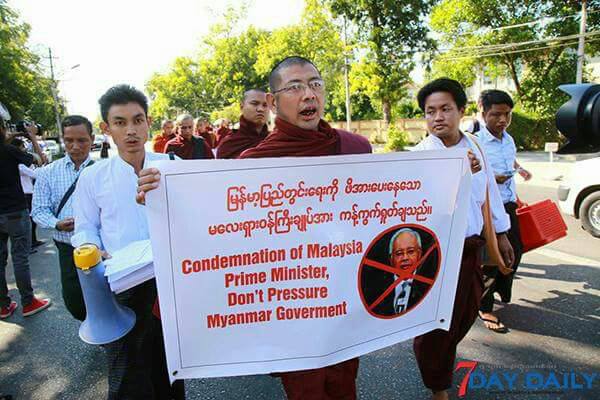 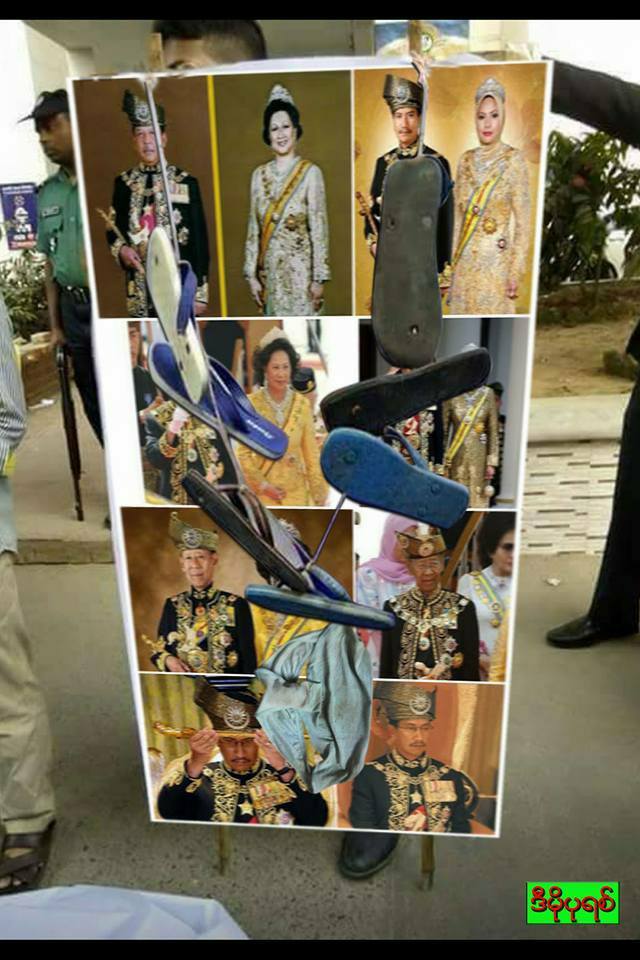 Had he studied the history of Myanmar, and of that country’s Rakhine province that the Rohingyas populate, he would have got to know how the Rohingyas themselves had massacred, raped, looted, enslaved and forcibly converted the indigenous Buddhist people of Rakhine region for many decades.

Najib would have got to know that Rohingyas have been, since the 15th century, an unwelcome presence in Rakhine. Muslims from Bengal, which was then ruled by Sultans, made their first appearance in Rakhine in the first part of the 15th century. In the earliest part of the 15th century, due to a line of weak Rakhine kings, its two powerful eastern neighbours--the kingdoms of Ava and Hanthawaddy (Pegu)--started jostling for control. Rakhine became the theatre for a forty year war between Ava and Pegu that drove out the Rakhine king Narameikhla Min Saw Mon (1380 to 1433) from his kingdom in late 1406.

Saw Mon sought refuge in neighbouring Bengal and entered the service of Bengal Sultan Jalaluddin Muhammad Shah. Saw Mon proved to be a good commander and became close to the Sultan. In 1429, he convinced the Sultan to help him invade Rakhine; the Sultan agreed and provided troops, mainly Afghan adventurers. The attackers defeated the then rulers of Arakan, as Rakhine was known as then, and Saw Mon was installed as the Rakhine king.

However, Saw Mon, who founded the kingdom of Mrauk U, became a vassal of the Bengal Sultan and was forced to allow thousands of Bengali speaking Muslims to settle in his kingdom. He was also forced to accept the use of Islamic coins of Bengal and was given an Islamic title despite being a Buddhist. Historians say that an estimated 18,000 Bengali Muslims settled in Rakhine that time. Rakhine remained a vassal state of Bengal till 1531.
But from 1531 to 1629, Portuguese pirates operating along Bengal’s western coast (especially around Chittagong, sold many Bengali Muslim boys and girls they used to capture from Bengal to rulers and nobles of Rakhine and, thus, the population of Bengali Muslims in Rakhine increased further in the early 17th century.

Rakhine was conquered by Burma’s Konbaung dynasty in 1785 and following persecution of the Rakhine people by the Bamars (the dominant ethnic group in Burma), tens of thousands of Rakhines fled to Chittagong province. The Bamars also executed thousands of Rakhine men and deported most of the local population to central Burma. Many Burmese historians quote texts and accounts of those times to hold that the Bengali Muslims, who had started calling themselves Rohingyas (people of Rooingya, as the Bengalis used to call Arakan), helped the Bamars persecute the Rakhines. In return, the Rohingyas received protection from the Bamars. The Rohingyas’ co-religionists in Bengal also started looting and torturing the Rakhine refugees, raping their women and forcibly converting them to Islam.

Rakhine thus became a thinly populated province by the time of the First Anglo-Burmese War (1824-1826) which resulted in the annexation of Arakan by the British. And then started the second, and more intense wave, of migration of Bengali Muslims to Arakan. The British started bringing in Bengali Muslims to work as labourers in farmlands and other trades. The population of Bengali Muslims increased dramatically and by the late 19th century, they formed more than 20 per cent of the population of Arakan. The fact that the British East India Company extended theBengal Presidency to Arakan also encouraged this migration and demographic change in Arakan.

This demographic shift caused by the unabated migration of Bengali Muslims from Chittagong to Arakan triggered racial tensions between the indigenous Rakhines and the settlers. Clashes started erupting between the two groups, forcing the British to set up a special investigation commission led by one James Ester and Tin Tut (who became independent Burma’s first foreign minister). Though the commission recommended a halt to further migration and sealing the borders of Arakan with Bengal, these remained only on paper since the British retreated from Arakan at the outbreak of World War II.

And then started another bloody chapter in relations between the Muslim Rohingyas and Buddhist Rakhines. The absence of the British sparked violent clashes between the two groups. The British had given huge caches of arms to the Rohingyas in northern Arakan to stave off the invading Japanese and act as a buffer to British India, as also to take on the Rakhines who had started supporting the Japanese. In March 1942, Rohingyas killed 20,000 Rakhines in northern Arakan, something that the Somali-origin Artan (the Ohio attacker) who spent seven years in Pakistan before migrating to the US in 2014 would have been blissfully unaware of.

Once the Japanese overran large stretches of Burma, they started committing atrocities not only on the Rohingyas, but also the indigenous Burmese (including the Rakhines), Anglo-Burmese, British and the Indian migrants settled in Burma. They all fled to India; about 22,000 Rohingyas took shelter in Bengal. The British once again armed the Rohingyas and organised them under a ‘Volunteer Force’ to harass the Japanese. But the Rohingyas once again turned on the Rakhines, killing them and destroying their houses, Buddhist monasteries and pagodas, raping their women and forcibly converting them. Artan would also have been ignorant of this.

The Rakhines started harbouring a deep-seated distrust and animosity towards the Rohingyas. This became more deep-seated when the Rohingyas started demanding integration of Arakan with East Pakistan during the mid-1940s when two-nation demand gained ground. Just before Burma gained independence in January 1948, the Rohingyas appealed to Pakistan’s founder Muhammad Ali Jinnah to ask the British to incorporate Arakan in East Pakistan. Jinnah refused, saying he did not want to interfere in Burma’s affairs.

But the unfazed Rohingyas founded the Mujahid Party in 1948 to carry on a jihad against the Rakhines in northern Arakan with the ultimate aim of creating a Muslim country of Arakan. They carried out many strikes against the Rakhines and their Buddhist shrines and monasteries, even torturing and killing Buddhist monks. It was only after the 1962 coup in Burma by General Ne Win that the military started cracking down on Rohingya terrorists who had the complete support of all the Rohingyas in Arakan. This triggered a moderate exodus of Rohingyas, who still form about 40 per cent of the population of Rakhine province, to East Pakistan. Many Rohingyas also migrated to West Pakistan.
But another wave of migration of Bengali Muslims to the Rakhine province took place during the genocide unleashed by West Pakistani troops on the Bengali-speaking people of East Pakistan in 1971. This migration, totalling to an estimated 750,000, to Burma continued even after the formation of Bangladesh (in December 1971) till 1973. Due to immense pressure from Buddhist monks and indigenous people of Burma, and fed up with the continuing attacks on security forces and installations as well as killings of indigenous Burmese by Rohingya terrorists, Ne Win’s government drove off 200,000 Rohingyas to Bangladesh till 1978. Bangladesh protested, and the UN intervened to force Burma to take back all the ousted Rohingyas. The New Win regime then enacted a citizenship law denying citizenship status to Rohingyas.

Rohingya terrorists have been carrying out many attacks in the Rakhine province and in the northern part of the province where they form nearly 90 per cent of the population, they have long followed a systematic pogrom of killing and driving away the indigenous Rakhines, and destroying Buddhist shrines. The Myanmar authorities have, naturally, cracked down very hard on them, thus triggering their exodus to Bangladesh and South-East Asia. The Rohingyas have killed scores of Myanmarese troops and police officers. The latest was a series of attacks on Myanmarese posts bordering Bangladesh by a Rohingya Islamic terror organisation called Rohingya Solidarity Organisation in early October that left nine police officers dead. Myanmarese security forces are engaged in a fresh anti-terror operation against the Rohingya terrorists which the Rohingyas and bleeding-heart human rights bodies term as ethnic cleansing.

The propaganda whitewashing centuries of bloody acts by the Rohingyas, their ethnic cleansing and genocide against Rakhines and their trying to take over an integral part of Myanmar by sheer force after totally altering its demographic composition is what drove Artan to his dastardly act. Human rights activists gloss over the fact that the Rohingyas too have blood on their hands. They paint the Rohingyas as the only victims of ethnic cleansing in Myanmar when the facts of history are quite contrary to that. Unfortunately, most of the world buys this false narrative.