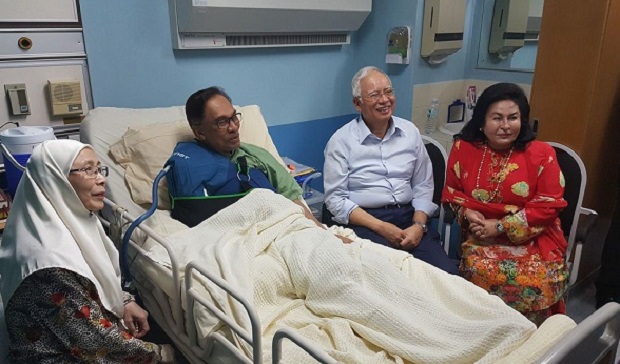 It must have been your decision to allow those two into your room - ostensibly to wish you speedy recovery.

I am no Anwar Ibrahim. Anwar Ibrahim has been DPM and a deputy president in Umno.I am not even a member of Umno. I cannot claim to have walk in Anwar's shoes for he has walked many many more political miles than me. Nor can I say that my ability to withstand physical and mental challenges are far greater then him for the physical and mental challenges that Anwar have undergone would have tested even a Mandela or a Ghandi.

If I was in Hospital recovering from an operation and a man who has done all he could to make my life a living hell...done all he could to take away every conceivable civil and personal rights that is mine as a husband, father and leader of my political party...done all he could to plan, schemed and plot to ensure that I do not have a level playing field in my endeavours to lead the opposition against a corrupt and arrogant Umno in the coming PRU 14...if that man was to walk into the Hospital room where I am recuperating from an operation...if that had happened to me....if I could walk, I would have walked out of the room.

If I could not walk but could talk.......I would have told anyone who would listen to me....that I do not want that man and his wife anywhere near me...what more come into a room where I am recovering from an operation.

And if I could not walk, could not talk and am still unconscious after the operation, I would have left word BEFORE the operation about the people that I will and will not see...and I will make sure that those two would be at the top of the list of the people I do not want to see!

Saudara Anwar ...that is what I will do.

But as I have said...I am no Anwar Ibrahim...but saudara whether I am you or not is not the point. The point is this.......when someone as corrupt, as arrogant and as evil as these two are, and someone who has by their actions and deeds caused you so much physical and mental sufferings as these two have done...and not only to you but also to your family....then saudara, the right thing to do is to tell those two to go to Hell!

Yes I know the gracious thing to do is to bite your tongue, grin and bear their presence for the few minutes that there were there with you...but Saudara Anwar why not allow a rat like Najib on a sinking ship to just drown instead of throwing them a life line to swim ashore? Them coming to see you is merely a "photo opportunity " that will get them a few "likes" on their twitter and FB page...please saudara....next time....do not even give them that opportunity to get those few "likes". These scums deserves no life line, deserves to have no opportunity to even get a few "likes" on their twitter or FB account....deserves nothing less then to be told to their faces that "Engkau ingat ini kepala bapak engkau punya hospital? Get Lost!".

I know I will do that, I know Tun Dr Mahathir will do that...and I think you too should have done that!