18,000 Malaysians chose Singapore to settle in each year!

There are two ways they can obtain permanent resident in Singapore:

1.    Through the Global Investor Programme (GIP Scheme) which requires you to invest at
least  2.5 million Singapore dollars in Singapore.

2.   Through the Professionals/Technical Personnel & Skilled Worker Scheme (“PTS
scheme") where you need to have worked in Singapore for a number of years, be
law abiding  and deemed be an asset to SIngapore..

What about Malaysia?
Malaysia have been giving citizenship in the hundreds of thousands to the pendatangs.
They are not an asset to our country!

And when they start earning money they send money overseas for families and loved ones left behind in their country of origin.

Yes these Pendatangs are economic migrants but not the kind acceptable to Singapore but who the hell cares in Malaysia! For these Pendatangs, Islam seems to be the over ridding criteria for entry into Malaysia and Islam again will allow them to obtain citizenship.

What is the costs of having these 18,000 non-Malays leave Malaysia for Singapore?

uOr country bleeds professionals and cash up investors to Singapore. It does not take a Stephen Hawkings to work out what the sum of all this would do to our county, our economy and our society. Yet it has taken all these years for this BN government to understand that Malaysia will bleed to death or die a slow agonizing death if this continues. Now this BN government is attempting to stem the flow of talent, expertise and cash out of the country and making attempts to lure back Malaysian expatriates to come back. But surely it is a case of closing the chicken house after the chicken have flown their coup....quite like trying to execute Sirul AFTER he has left Malaysia!

Now tabulate how many Malaysians we are losing at other Malaysian Embassies and High Commission  in other parts of the world and you will begin to understand the enormity of the problem.

And you think there are all only non-Malays doing this?

Think again. Many Malays are leaving for greener pastures too.

And yet we hear there are Malays out there saying good riddance  and jumping up and down for joy at having these Malays and non Malays leave. They remind me of some of the boxing title matches I have seen on TV. These boxers are trained to not let their opponent know that they are hurt or are being hurt by the punches thrown at them by their opponent. How many times have we seen the guy getting punched smiling back at his opponent doing the punching as if saying "You can't hurt me!". He thinks that by smiling he is sending a message to his opponent that he is not hurt by the punches being thrown at him.

He gets hit in his solar plexus - he smiles back at the opponent.
He gets a powerful uppercut flush on his jaws - he smile back.
He gets a jaw breaking punch on his chin-- he still smile back.

He is still smiling when the ref is counting him out as he lies flat out on the canvas! 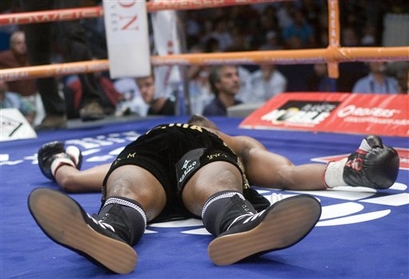 Wake up you Malays. We should not be rejoicing when the best amongst us are leaving our country for greener pastures elsewhere. Wake up to the corruption and the arrogance of this BN government that is driving them away. We are dying here.

Wake up before the ref starts counting us out!

Malaysians who migrated now number in the millions and counting. Each and every migrant will have their story to tell if asked. For sure they will tell you that migrating to another country is no easy task. It is an exhausting  process that takes many years to run its course. You are required to prove that you have the means to take care of yourself and your family once you are granted permission to migrate to the country of your choice.

In short for every Malaysian who leaves Malaysia to live abroad you can be sure that Malaysia is the poorer  …and you can multiply that for every generations that will henceforth be born, grow up, work and live in the country of their choice. If they number in the millions today, decades from now they will be in the tens of millions.

I migrated to Australia over three decades ago and my grown up children are now settled – one in Canada and another with us in Melbourne. My children still have much affection for Bangsar where we prefer to live when we are back in KL. Roti canai and durians are still words that needs no explanation for them.

For the next generation – my two grand children growing up in Canada -  their parents will have to explain to them where Bangsar is and what roti canai and durians are.

We all make our choices in life. Many have chosen to make Malaysia their home.Live with them. Live with each other.Live and let live.

Got this comment Leong which made me smile...."Our UMNO/BN Government "thinking outside the box!"....macham macham punya comment!

All countries in the world do their best to attract professionals and skilled workers to pep up their capacities and talent capital. Malaysia is about the only country that I researched to have made special efforts to drive away professionals and skilled workers in exchange for lower skilled or unskilled foreigners from countries like Indonesia, Bangladesh, Pakistan, etc. Our UMNO/BN Government is truly "thinking out of the box."﻿