At the time of its greatest need, England had Churchill to urge them to victory with his:

When South Africa could have sinked into the abyss of apartheid they had Mandela to lead them with his inspirational reminder:

"I learned that courage was not the absence of fear, but the triumph over it. The brave man is not he who does not feel afraid, but he who conquers that fear".

At a time when the impoverished people of Burma seems consigned to living many more years under a brutal military dictatorship they had Aung San Suu Kyi to lead them towards a better future and remind them that:


Today when Malaysia is faced with mounting racial and religious discord and bigotry that threatens the very foundation of its civil society while economically the falling price of oil and the economic downturn begins to bite globally, we have Najib Razak! 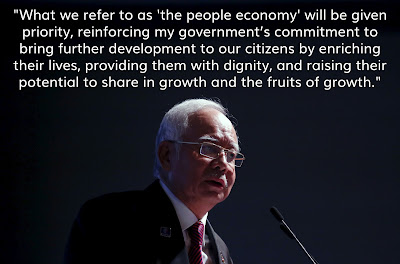 And among others, his promise that: 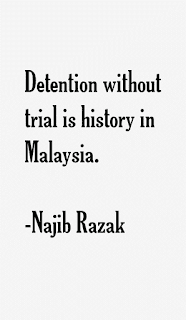 We have had Najib Razak since April 2009 as prime minister in a tenure that has been characterised by arrogance, impunity and hubris with a raging sense of entitlement thrown in just for the hell of it! In spite of...or should I say despite all this he thrives..albeit spluttering and at times stumbling and walking around in a self induced hubris daze...but he thrives.
Siapa kata Najib kurang bijak? Siapa kata Najib tak siuman? Siapa kata Najib is a bloody idiot? Did any of you thought that he could come up with this scenario...ok lah if you want to get technical...did any of you think that his advisers could come up with this story line ....

"he returned that RM2,6 billion donation!"

Returning a "donation" of RM2.6.billion (minus expenses lah!) .... now surely that is a "FIRST" anywhere in any part of the world where English is spoken? Make that any part of the world where hair jobs do not costs RM1200. Some one gives you a donation of RM2.6 billion unconditionally and you return it....minus some expenses!  A bit rich is it not?  This Najib is stupider that I thought. ....but hang on a minute......just back up a bit here and let us think this through.


The next question is "Why did he ask for the money in the first place and then why did he return it?" He had to ask for that money because common sense tells us that nobody - not even the stupid Saudi Royal family - gives any one RM2.6 billion if they did not ask for it!

Only Najib knows the complete answer to that and anything else is merely conjectures and speculations.

The other question is why did Najib wait until now to let us know this when he could have saved himself so much angst, hatred and odium from Malaysians by just telling us that he had returned the money in 2013?

Who will be the first in Umno to show "courage" by denouncing Najib for trying to "buy" their support now that his Bank account is minus the RM2.6 billion.

Who now in Umno will be brave enough to take Mahathir side.

Who now in Umno will declare their loyalty to Umno and not Najib?

Who within Umno will now stand up against the tyranny of money politics, condemn it and declare himself to be among the righteous few within Umno who will do his duty demi kepentingan Ugama, Bangsa dan negara?

Who will declare that they will not compromise their principles and do only what is best for Umno and not Najib?

Who among the Umno leaders will now stand shoulder to shoulder with those among them who will fight for the good of the Malays. Who will berjuang demi kepentingan Umno . And who among them will be "brave " enough to pledge loyalty to KIng country and nation "no matter what price they have to pay"......now that there is no more RM2.6  billion in Najib's account to meet their asking price to do anything! 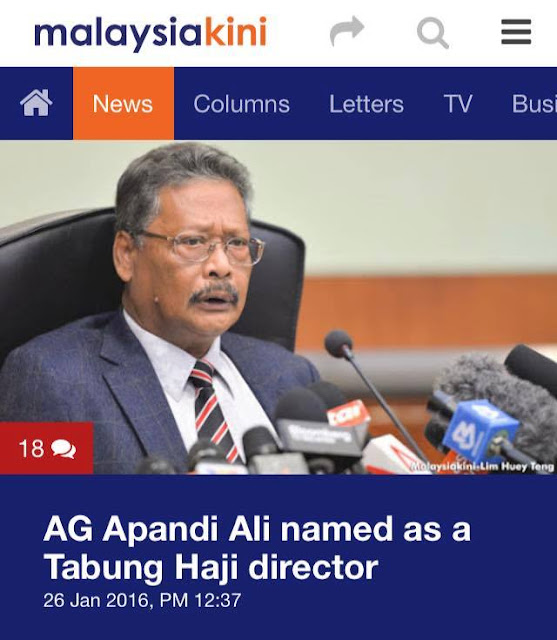 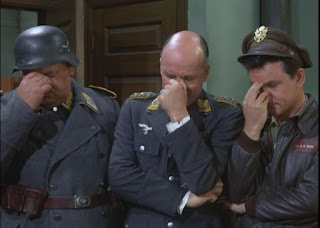 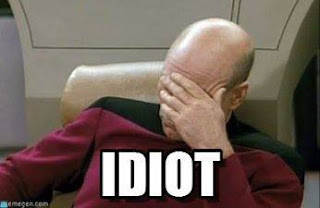 Is this another example of arrogance, impunity, hubris and that sense of entitlement I was talking about earlier? Appointing Apandi to the board of Tabung Haji just after this same Apandi had cleared Najib of being corrupt or of any impropriety in Najib's handling of the RM2.6 billion donation from the Saudi Royal Family?

The least Najib could do is first to confer a Tan Sri on Apandi for services to the "nation"  and then appoint him to any board he wants!

Aku steady aja.....I just ask the questions. You answer them as you think fit.