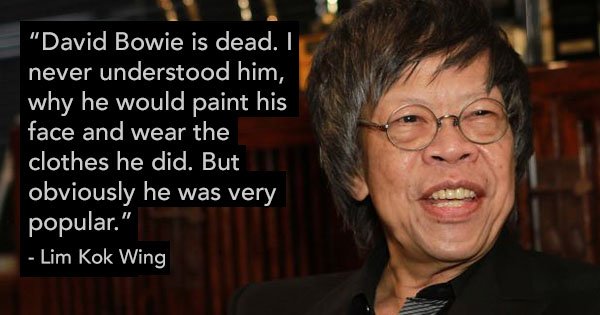 Is this not what social media is all about?

You see something on social media that you have an opinion on....you click a few buttons, key in your opinion and presto...you published same onto the Net into the public domain!

And in real time that "opinion" reaches places you never knew existed and is read by people you would normally rather not want to know or associate with.

They read what you posted a few minutes ago and if, like you, they too have an opinion on what they read, they will click a few buttons, get to work on their keyboard and tell you what they think of your thoughts...in this case, on David Bowie.

No censorship. Let your imagination run free and damm the consequences.

And so this Lim Kok Wing had his say on David Bowie....a man dead at 69 from Cancer. A man even Kok Wing knew "was very popular".

Now back up just a little bit and think!

And anybody with half a brain would want to think twice before they venture an opinion on a popular man who died from cancer at 69 years old lest what they say will upset his legion of fans who are still mourning his untimely death.

Now I have my own opinion on what Lim Kok Wing has said about David Bowie....but I am not going to hantam him because I do not know how "popular" this Lim Kok Wing is....and if I say anything untoward there might be people upset with me for doing so. So I will be quiet!