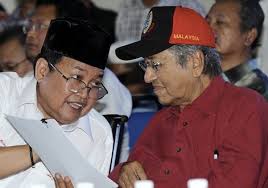 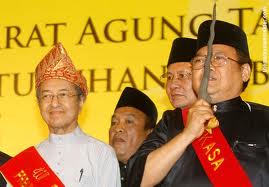 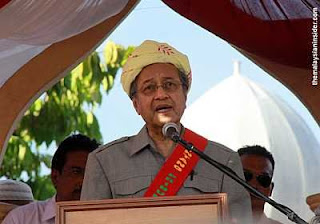 PASIR MAS, April 28 — Tun Dr Mahathir Mohamad praised Barisan Nasional’s (BN) Che Johan Che Pa today, after the Pasir Mas candidate refused to contest in order to give way to Datuk Ibrahim Ali.
The former BN chairman hailed Che Johan’s action on Nomination Day as a sacrifice for the good of the coalition, which left independent candidate Ibrahim free to fight PAS’ Nik Abduh Nik Abdul Aziz in a straight fight.
“In any struggle, sacrifice is necessary ... Not only has Che Johan sacrificed himself, now he is being tortured instead,” said Dr Mahathir here, referring to the impending disciplinary action by Umno against Che Johan.
“This is unfair ... If the disciplinary board wishes to prosecute him, then I will be his defence lawyer.”
Dr Mahathir was received by close to a thousand supporters, mostly made up of older citizens, who braved the glaring noon sun at Che Johan’s house.
Che Johan was once again given a hero’s salute, as the crowd chanted “Johan wira” (Johan the hero) among other chants like “Kelantan tukar” (Change Kelantan) and “Bunga raya” (Hibiscus) which refers to Ibrahim’s logo in the polls.
The Pasir Mas Umno division deputy chief claimed that his refusal to contest was spurred by Dr Mahathir’s insistence that BN field Ibrahim for Election 2013.
“I considered Tun’s advice, so I withdrew just to keep our beloved Tun’s dignity and integrity intact.