SIMPLY PUT...NAJIB IS NO ANWAR IBRAHIM. 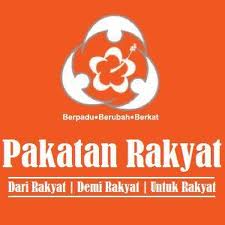 Let us have clarity on a few fundamentals.

We have had 55 years of government under UMNO. I say UMNO because to all intents and purposes UMNO is the dominant political entity within the Barisan Nasional and what UMNO wants, UMNO gets.

The issues that UMNO chooses to fight over in this 13th general election are race, religion and region. UMNO is for Malays. UMNO is defending Islam from the perceived missionary onslaught of the Christians! UMNO is desperate...okay lah let us call a spade a spade..Najib is desperate to maintain the States UMNO now has and win back those that they have lost in the 12th general elections. Anything else will mean that while there will still be a FLOM (Fat Lady of Malaysia) in his household - that FLOm will no longer have a Prime Minister as her consort!

What are the functions of government?

We need to concern ourselves with a few underlying principals here.

Common good, social justice, independent judiciary, well being of the community and accountability in the things that government do.

The litany of abuses and misuse of political power for personal gain under UMNO is acknowledged by all within UMNO. As Najib himself said: "Beri Salah. Tak beri Kalah!" Ask yourself what has been done by Najib since 2009 to make UMNO different?

In Ceramah after Ceramah what Anwar and other Pakatan Rakyat leaders talk about is what Pakatan Rakyat will do for our people and for our nation. There is no need to fix Pakatan Rakyat...you do not fix anything that is not broken!


There are a few critical factors that will have a bearing and decide who will take government.

The Christians have been greviously maligned and offended by UMNO, pro UMNO factions  and Perkasa religious rantings against their faith. For now they can only be quiet. But do not underestimate the solidarity of their faith and their real anger to this undeserved persecution from UMNO because they are Christians. I do not doubt that they have been working  quietly amongst themselves to ensure that UMNO and Perkasa will have reasons to regret their use of the Christian religion to win votes from the Malays.

Our youth will also be a critical factor in deciding government. Bersih 2 awakend them to possibilities and their activism and participation en mass in Bersih 3.0 rally gave them the right to claim and stamp their relevance to the future of our nation through their affirmative actions - voting for change will be a start!


PAS has raised their relevance amongst the Malays. PAS able and politically savvy technocratic leaders have conducted themselves ably to harness broad Malay support against what UMNO has done in the name of Ketuanan Melayu and Islam. PAS is now seen as a viable alternative to UMNO in matters of Religion and Race for the Malays -PAS and PKR if push comes to shove.


But what of the Rakyat who are uninformed, poorly educated and ignorant?


Will the cash handouts, Barisan Nasional propaganda, coercion and threats influence who they will vote for?

This is a worrying factor for Pakatan Rakyat to consider. The same can be said of the possible votes from the Pendatangs, PDRM, the Armed Forces and collusion of the EC to favor Barisan Nasional....but even in these areas Pakatan Rakyat have been making inroads to turn the tide Pakatan Rakyat's way.


Pakatan Rakyat first tier leaders are all over the Nation talking directly to the  Rakyat and by sheer hard work and determination have reached out to the people that have come to meet and greet them at these Ceramahs. One by one and one on one they meet and greet their supporters and possible converts and fence sitters  to try and bring them over to Pakatan Rakyat!


They do so with the firm belief that what they have done in the States they manage have been open, accountable and bears scrutiny from anyone. Pakatan Rakyat have nothing to hide. And what they promise to do for our people and our nation should they take government they want the Rakyat to know and understand through reaching out to them through these Ceramahs.


In contrast Najib has choosen not to go head to head with Pakatan Rakyat on the Ceramahs trails. He does not have the stomach to do so. He knows that there will be too  many questions that will be asked of him that he will not be able to answer. It is one thing to talk to a captive audience of UMNO members in PWTC...another to stand in Batang Berjuntai or Batu Pahat and hope that the Mineral Water and Beras give aways will bring the crowd to your Ceramah and make them stay to listen to you.


Simply put Najib is no Anwar Ibrahim!
In the end it will really come to what happens on Election day. That we are at this juncture of our political history when this  UMNO led Barisan Nasional must think about defeat as a possible outcome, is already a victory for Pakatan Rakyat and for our people.

All will change after this election and surely all for the better!


Any party that wins government will have to face a strong opposition in Parliament - strong enough to keep any government honest.


Any party in Opposition knows that will have an opportunity to take government at the next general election should the government of the day not deliver on the aspirations of the people who voted them into power.


So as of today we are already on the path towards change! Let us now make change a reality and vote Pakatan Rakyat into government to make REAL CHANGE happen as of MONDAY the 6th of MAY 2013 - the day after we vote for that change in this 13th general election! It is possible! It is doable! Hidup Pakatan Rakyat.