SIR, YOU NEED TO TAKE RESPONSIBILITY! 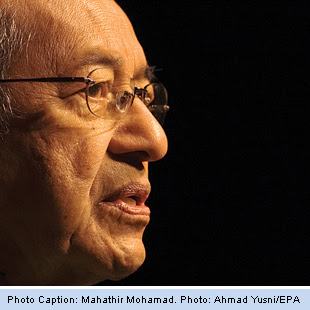 Tan Sri Abdullah, group editor in chief of the New Straits Times, wrote (June 26 2002), "("Mahathir) has....created a legacy so monumental that no one could have presumed his mantle"

That was what Abdullah Ahmad gushingly said of Mahathir when the great man (Mahathir lah!) announced his resignation on June 22 of that same year.

“Hear! Hear!” I say…or as Antares succulently said for the benefit of Ibrahim Ali, “Dengar, Dengar!” I believe that that came from Abdullah’s heart for you cannot write anything so ‘moving’ if it does not come from the heart. Now let me tell you what comes from my heart when I read that.

Who would be foolhardy enough to assume Mahathir mantle?

This man used money and power like no other PM of Malaysia has ever done! Like no other leader in most parts of the civilized world has ever done save for some parts of Africa and some parts of our world where accountability for one action is easily dismissed through the barrel of the gun or the abuse of political power!

Who would dare to assumed the monumental mantle of this Mahathir who was instrumental in bringing into our way of life such concepts as the ends justifies the means, ISA, nepotism, cronyism, money politics, greed, privatizations, IPP’s, Perwaja, utter vindictiveness to those that simply do not agree with his point of view, negotiated tenders, a tainted Judiciary, Bakun, crooked bridge, Renong and its horrendous debts, Khir Toyo, Daem, and the list is endless. Every government machinery, every high public office appointment, every political decision made during Mahathir’s time was at his pleasure and made to do his biddings!

What defines greatness in a man?

"It's not what you take but what you leave behind that defines greatness.” – Edward Gardner.

This man left us with debts measured in billions not millions!

This man left us with monuments of First World stature but failed miserably to prepare our then third world mentality to be ready for these iconic structures. When you bring a nation into an era that it is not ready for, you are being irresponsible!

That a man of your previous stature would require me, a 65 year old man living in Melbourne to write this biting and hurtful article about you simply indicates the depth you have allowed yourself to sink to. This would not happened to the Mahathir that was PM for 22 years – who brooked no challenge to his rule for those 22 years! How things have changed!

Sir you would need all the goodness that is in Mecca, all the forgiveness that Mandela has shown to the very people that imprisoned him and all the love that the family of Teoh Beng Hock, Kugan and Aminurasyid have for their love ones if you are ever to be forgiven by the people of this country. And I know that even with all that you would still have a hard time walking down the streets of KL without worrying that someone  might spit on you…and that Sir is the whole truth and nothing but the truth…so help me God!

steadyaku47 comment: First posted a while back....cannot remember when!