Scorpene Submarine seen off the coast of Sabah! Berita Terkini!!

A comprehensive database of credible sightings and eye witness accounts and reports is being maintained by steadyaku47  - an all volunteer network comprising of dedicated researchers, archivists and investigators in Sabah and Semanjung – to support our BN’s government effort to pantau the movements, diving and surfacing of the Scorpene Submarines.

If you have had a sighting in the waters of Sabah, Sarawak Semenanjung, or any other country, please take a moment and report it to our team at steadyaku47 HERE. The report will be kept quiet and not publish if you request it.

If permitted by you, the sighting report will be added to the main sighting database and immediately  communicated to the Government of Malaysia and thence to TLDM for whatever action they deem fit.

Note: A number of reports have indicated that the said Scorpene Submarines have been sighted in Port Kelang where it is said that its crew were seen having Nasi Lemak at the D’Pandamaran Nasi Lemak Corner. We have not been able to verify this incident as the videos submitted were to short and often times shaky with blur images. We would prefer to have an image of the submarine itself rather than its crew!

The dedication of our team has managed to confirm that the Scorpene Submarines have been seen of the coast of Sabah on the 26th April at 4 p.m. We provide herewith irrefutable instagram evidence of same below.

However we are unable to confirm that the said submarine would be able to selam as our team has indicated that the submarine was on the surface during all the time that it was under observation.

Please note that we have been informed by reliable sources in PWTC that the BN posters plastered all over its hull may have something to do with the submarine not being able to dive until at least after the 5th of May. Harap maklum. 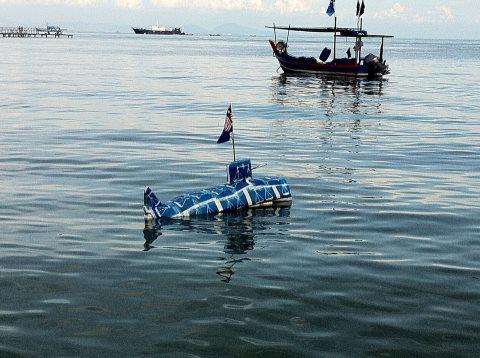