Live coverage from Yahoo!7
Boston police have confirmed at least two people are dead and dozens are gravely injured after two explosions at the finish line of the world's most popular marathon on Boston. Follow our live coverage here.
UPDATE 8.44am It's believed one of the victims of the Boston explosions is an eight-year-old girl, as members of US Homeland Security confirm this was a 'deliberate, sophisticated attack'.
Bloomberg News reports the White House is declaring the tragedy an 'act of terror'.
8.24am US President Barack Obama has addressed the nation, as the FBI reportedly confirms the explosions in Boston are the result of a terrorist attack.
The President has warned against jumping to conclusions in the immediate aftermath of the disaster.
The President told the people of Boston he stands beside them, and will track down the people responsible for the explosions.
"We still do not know who did this or why, but make no mistake, we will get to the bottom of this."
"We will find out who did this. We will find out why they did this."
"Any responsible individuals, any responsible groups, will feel the full weight of justice."
"I am supremely confident Bostonians will pull together, take care of each other and move forward... The American people will be with them every step of the way."
7.44am Police now say a fire at the JFK library in Boston is not related to bombs which were detonated at the Boston marathon.
There are continuing, unconfirmed reports of a man under police guard in hospital with shrapnel wounds.
7.18am Boston officials have held their first press conference, confirming two people are dead, and at least four explosive devices were placed around the city.
As well as two bombs near the Boston marathon finish line, another device has been neutralised nearby, and there was an explosion at the JFK library in Boston, where no one was injured.
"There was an explosion that occured at the JFK library", Boston police commissioner Ed Davis said.
"This is very much an ongoing event at this point in time, but we are not certain that these incidents are related, but we are treating them as if they are."

Two blood stained feet of a man hang outside an ambulance outside a medical tent. Photo: Getty


Commissioner Davis has described what is known so far:
"There were simultaneous explosions that occured along the route of the Boston marathon near the finish line," he said.
"These explosions occured 5-100 yards apart and each scene resulted in multiple casualties."
"At this point in time all of the victims have been removed from the scene and we have sent officers to hospitals to be in touch with family members and possible witnesses."
"We immediately activated a system of response that the Commonwealth of Massachusetts and the federal government has in place for these type of incidents."
"My first two calls were to the special agent in charge of the FBI and the colonel or the state police (who both immediately sent resources)."
"We're recommending to people that they stay home, that if they're in hotels in the area that they return to their rooms and that they don't go any place and congregate in large crowds." 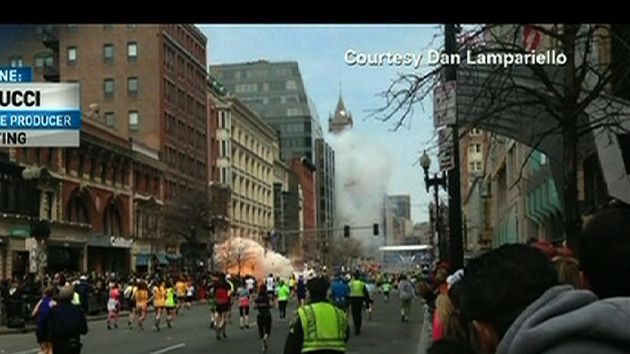 Authorities have confirmed two deaths and severe injuries to many more after two explosions rocked the finish line at the popular Boston Marathon.
6.50am Cities across the United States have activated heightened security measures as a precaution as it's confirmed explosions at the Boston marathon were a deliberate attack.
At least one, and possibly two other bombs have been discovered and neutralised by Boston police, after two bombs were detonated in crowded areas near the finish line.
People in the area have been warned to stay away from rubbish bins, after it was reported the explosions centred around bins.
NBC news in Boston has sighted senior Washington officials saying they do not believe this is the beginning of a wave of attacks, but simply an attack centred around Boston. 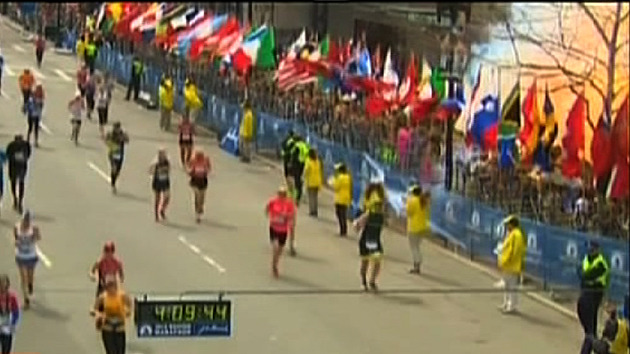 Marathon runner Lauren Case speaks to Sunrise about her personal recollection of the two explosions that rocked the finish line of the Boston Marathon.
6.06am There are reports of a third explosion, which was set off deliberately by police after an area beneath the marathon's stands was cleared.
Boston marathon officials have reportedly said the explosions were caused by a deliberately placed bomb, although this report has not been confirmed by police.
A first explosion took place behind spectators in a very crowded area near the finish line, followed by a second explosion around 15 seconds later.
There are reports of men, women and children with grave injuries, including missing limbs.
Dozens of people have been taken to hospital, and the death toll is expected to rise.

The moment an of the blast at the finish line of the Boston marathon. Photo: AAP

Two explosions have hit the finish line of the Boston Marathon, causing multiple injuries.
TV footage showed what appeared to be streets littered with debris and blood, with paramedics carrying stretchers.
US media is reporting multiple injuries from the "large explosions" at the finish line.
Boston police confirmed at least one explosion near 673 Boylston Street near the finish line of the race. Marathon organisers said there had been two explosions.
"There was an explosion, police, fire and EMS are on the scene. We have no indication of how many people are injured," a spokeswoman for the Boston Police Department said.
The explosions occurred as thousands of runners finished the 117th running of the Boston Marathon, with crowds watching and cheering at the finish.

People earlier took to Twitter to describe the scenes in Boston:
6:00am: The Boston Mayor's office says police have confirmed the explosion:
Please avoid area of Copley Square to allow first responders to work.
- Mayor Thomas Menino's Office
US reporter Jackie Bruno is at the scene and says she and her cameraman felt the force of the explosion:
I saw people's legs blown off. Horrific. Two explosions. Runners were coming in and saw unspeakable horror.
- Jackie Bruno
Cook I talked to says he tied his apron around a woman's severed leg.
- Boston Globe reporter Michael Levenson
5:56am: Boston Globe reporter Steve Silva: "Blood everywhere, victims carried out on stretchers. I saw someone lose their leg, people are crying. You can follow on Twitter.
The explosions took place about three times after the end of the marathon.
5:51am:
There were two bombs that exploded near the finish line in today's Boston Marathon. We are working with law enforcement to understand what exactly has happened.

The scene in Boston, Photo: Getty


- @bostonmarathon
5:49am:
Only thing confirmed at the moment re Boston is that there were two loud explosions at finish line of marathon and the scene is chaotic
- ABC correspondent @LisaMillar
5:46am:
Trauma nurse with Mass. General Hosp. says there are possibly two fatalities and some victims with severed limbs.
- @KSATnews
5:40am: Eyewitness Mike Mitchell of Vancouver, Canada, said he was looking back at the finish line and saw a "massive explosion."
Smoke rose 15 metres in the air, Mitchell said. People began running and screaming after hearing the noise.
5:38am: New York Police Deputy Commissioner Paul Browne says police are deploying counter-terrorism vehicles around landmarks in Manhattan.
5:35am: US media is reporting that there were two explosions at the finish line: injured people are streaming into local hospitals; reporting multiple injuries.
The hotel that serves as the headquarters for the Marathon has been locked down.
5:32am: This map shows the scene of the explosion.