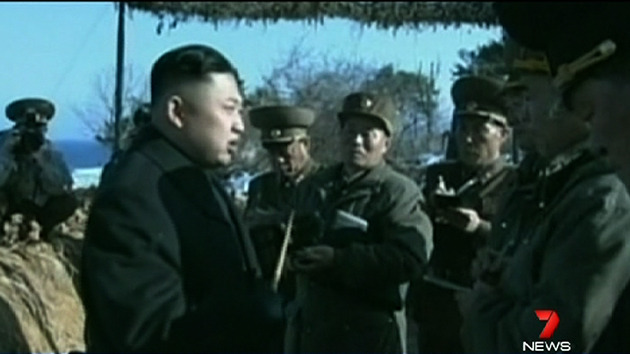 The world is watching and waiting to see whether North Korea carries out it's test missile launch, following days of rhetoric from the country's leader.

South Korea raised their alert status to "vital threat" on Wednesday ahead of an expected North Korean missile test, with tensions wound tight during a five-day buildup to a key anniversary.
The North last week told foreign diplomats in Pyongyang they had until April 10 to consider evacuation, fuelling speculation of a launch between Wednesday and April 15 birthday celebrations for late founder Kim Il-Sung.
It could also coincide with high-profile visits by US Secretary of State John Kerry and NATO chief Anders Fogh Rasmussen, who will both be in Seoul on Friday.
South Korean Foreign Minister Yun Byung-Se told parliament the launch could take place "anytime" and warned Pyongyang it risked triggering a fresh round of UN sanctions.
South Korean intelligence says the North has prepared two mid-range missiles for imminent launch from its east coast, despite warnings from ally China to avoid provocative moves at a time of soaring military tensions.
On Tuesday the North reiterated a warning that the peninsula was headed for "thermo-nuclear" war and advised foreigners to consider leaving South Korea.
The South Korea-US Combined Forces Command raised its "Watchcon" status from 3 to 2 to reflect indications of a "vital threat", Yonhap news agency said, citing a senior military official.
Watchcon 4 is in effect during normal peacetime, while Watchcon 3 reflects indications of an important threat. Watchcon 1 is used in wartime.
In a separate report, Yonhap quoted a government source as saying Pyongyang might be preparing "multiple" launches, after other launch vehicles were reportedly detected carrying shorter-range SCUD and Rodong missiles.
Although the North's warnings to embassies in Pyongyang and foreigners in the South were both largely shrugged off, there is growing global concern that sky-high tensions might trigger an incident that could swiftly escalate.
UN Secretary General Ban Ki-moon said during a visit to Rome that he had spoken to the Chinese leadership to try to calm tensions, and would discuss the issue with US President Barack Obama.
"The current level of tension is very dangerous, a small incident caused by miscalculation or misjudgement may create an uncontrollable situation," Ban said.
North Korea has wielded the "thermo-nuclear war" threat several times in recent months despite expert opinion that it is nowhere near developing such an advanced nuclear device.
The crisis on the Korean peninsula has been intensifying almost daily since the North's nuclear test in February, which drew toughened UN sanctions.
Incensed by ongoing South Korean-US military exercises, Pyongyang has accused Washington and Seoul of preparing an invasion and threatened dire military actions ranging from artillery barrages to nuclear strikes.
South Korea last went to Watchcon 2 around the time of the North's nuclear test, and its long-range rocket launch last December.
The Watchcon system solely relates to surveillance levels and is separate from the Defcon system of military preparedness.
The mid-range missiles mobilised by the North are reported to be untested Musudan models with an estimated range of anywhere up to 4,000 kilometres (2,485 miles).
That would cover any target in South Korea and Japan, and possibly even US military bases on the Pacific island of Guam.
Japan, whose armed forces have been authorised to shoot down any North Korean missile headed towards its territory, has deployed Patriot missiles in its capital as a pre-emptive defence measure.
The North's official Rodong Sinmun daily on Wednesday accused Tokyo of "military adventurism" and warned it against siding with the United States.
"The Korean People's Army is fully capable of blowing up US military bases not only in Japan but in other areas of the Asia-Pacific region," it said.
A top US military commander, Admiral Samuel Locklear, said he favoured shooting down a N.Korean missile only if it threatened the United States or Washington's allies in the region.
Posted by STEADYAKU47 at Wednesday, April 10, 2013