I knew the Chinese were not going to take it sitting down. This time around to keep to the animal theme, they came up with the "Bangsar South Doggy Style" caper!

KUALA LUMPUR – An unidentified man and woman were spotted having sex in broad daylight at the balcony of an apartment unit purportedly in Bangsar South here, the Guang Ming Daily reported.

The couple’s activity was spotted by another tenant in the area whom recorded the act before sending it to the daily.

The tenant said the activity lasted around 30 minutes although he did not mention when it actually occurred.

MCA Public Service and Complaints Department chief Datuk Seri Michael Chong slammed the couple and urged the tenant to file a complaint to the police or apartment management so that action can be taken against them.

I have told Umno once and I will tell them again :

The Chinese will always want do better than we Malays!

For a while the Chinese had the number one position in as far as Sex Escapades in Malaysia was concerned  - and we all agreed that it was truly deserved!  They had the MCA President himself taking the lead role and coming up front with that infamous "I am the man in the tape!" statement.

Then along came that Mufti from Perak, Harussani, with his equally infamous insistence that Muslim boleh have Sex on a Camel And can do so legally!

And I knew the Chinese were not going to take it sitting down...and they did not.  This time around to keep to the animal theme, they came up with that "Bangsar South Doggy Style" caper!

I know this "Bangsar South" caper has got "CHINESE" written all over it!

And Muslim are not animals - we do it missionary style all the time. Go ask any Muslim and see if they even know what "doggy style" means - aiyah you all know that they cannot touch dogs...what more emulate them in sex! So the couple has to be Chinese ma!

The person taking the video is also Chinese. Again you want to know how I know?

So all this is a Chinese plot - with or without the help of the Christians! A Chinese couple took part in the caper, a Chinese took the video and finally  the tape was handed in to Giang Ming daily and not Utusan.

And then the icing on the cake was when the MCA Public and Services Complaints Department Chief  Michael Chong got involved.....you know how desperate MCA are to get any credit for anything that the Chinese can do better than the Malays!

Word has already gone out that Pemuda Umno will take the challenge thrown at them by this latest Chinese attempt to do better than the Malays.

Let it not be said that Pemuda Umno will let the Chinese walk all over the honour of the Malays. Tak kan Melayu mati di dunia they say. Mereka berikrar that Pemuda Umno will meet this challenge from the  Chinese head on. Whatever it takes (and of course it will take a lot of money lah!) Pemuda Umno will come up with a video of a couple having sex on a camel on a balcony. Though to be fair to them, they did say that the act of the  couple having sex on a camel on a balcony might not take place specifically in Bangsar. I hope the Chinese and all Malaysian will be good sports and agree that the act can take place  anywhere in Malaysia just as long as it is during the day.

At the time of this article going to press (actually being posted on my blog...but going to press sounds better lah!) Pemuda Umno has still not confirm the ethnicity of the couple doing it on a camel on a balcony yet. So tunggu first ok?

I have it on good authority that Najib has given the green light for the "project to go on. Quietly of course. If Mahathir gets wind of this he will turn it around as say that Najib is encouraging Muslims to have sex in public on a camel on a balcony! So all hush hush. Funds have already been allocated for the deed and the first draw down has been made to pay for preliminaries...the first item is of course a Camel.

Barisan Nasional has collectively agreed to the use of the following banner to be displayed over or in the background of the couple having sex on a Camel on a balcony anywhere in Malaysia in daylight. 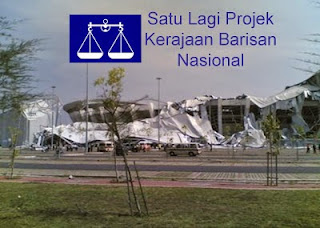 One reason Najib agreed was that a story of this magnitude will take the heat away from the troubles that he is facing with 1MDB and that pesky Tun Mahathir. Wag the Dog they say!

I as a Malay, and ALL Malays, must get behind Pemuda Umno on this one. This is one Malays against Chinese "thing" that I want to see be made into an annual event or better still, once every six months. Hidup Melayu!