There may be honor amongst thieves...but there is none within Anwar Ibrahim! There may be honor amongst thieves but there is none within Anwar Ibrahim. How can there be when there has been no morality, no guilt, no empathy no remorse within him for the things that he does in the name of Umno, Reformasi, PKR and now Pakatan Rakyat! Anwar Ibrahim knows the difference between right and wrong but right or wrong are invariably his choice to make to justify the ends that he wants....and he has the intelligence and the skill to pull it all together and almost succeed...but you can fool some of the people some of the time,,,,but not all of the people all of the time.

He has a grandiose sense of self worth which his intelligence, cunning and manipulative self can almost keep pace with .,,,and I say almost here because invariably even those close to him, those most loyal to him and those prepared to die for him, will see through his failure to accept responsibility for his actions...be it his lifestyle or political ambitions.

Cast your mind back to his days in Umno when a personality cult grew around him at his instigation.

A personality cult born out of his own well cultivated supposedly religious zeal as a leader of all things Islamic...Pa Sheikh they call him! 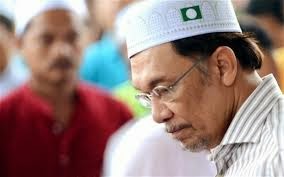 His avowed championing of the Malay race without regard to what his policies as the education minister was doing to the future of our people and our nation,

And his rabid manipulation as Minister of Finance and DPM of politics and business to advance his own political agenda to the exclusion of any other consideration but his own!

All this Anwar Ibrahim did while he was still in Umno. Those of us who knew him before Umno and after Umno saw the beginning and the maturing of the Anwar Ibrahim that you all now see as the leader of Pakatan Rakyat, PKR and by default, the opposition.

Loyalty too has its limits. I for one will no longer be silent.

Everything that Anwar Ibrahim has done is about himself, for himself and of himself....and his family. Everyone else he uses as his pawns for these ends...and so why you may ask are there people still with him in PKR?

Anwar Ibrahim decided to remove Khalid way before GE13 and he told Azmin Ali that he will be the one to replace Khalid. Please note here....Anwar Ibrahim told Azmin Ali that Azmin Ali will replace Khalid. Even after appointing Khalid to a second term Anwar encouraged Azmin to think that his time as MB will come sooner rather than later and towards this end he encouraged Azmin to rock the PKR boat to unsettle  and unseat Khalid.

Even as Khalid got stronger with the backing of Wan Azizah and her ally Faekah.

Even as Khalid started to ignore PKR.

Even as Khalid no longer entertain Anwar and snub party affairs and function's.

And through all this Anwar Ibrahim was intelligent enough to understand that everything was slipping away from him.....the falling of the domino's started.

It was always about Anwar Ibrahim....and everything else was an after thought.

And where PKR and Pakatan Rakyat now unhappily finds itself is invariably the result of what Anwar Ibrahim has done to further his own and his family political ambitions...ambitions that are short on morality, lacking in substance and certainly not deserving of any credence. We have seen this before when KJ fancied himself to be the defacto PM during Pak Lah's tenure as PM and later with Rosmah who proclaimed herself FLOM....all fools for whom the public had nothing but contempt for!

And now the end is near because all the people that have been fools and fooled by Anwar Ibrahim are saying enough.

There are enough of these people within PAS to ensure that it is PAS that will make the stand to say enough is enough to Anwar.

DAP is pragmatic to the point of eschewing everything else...better the devil you know than to have Pakatan Rakyat wreck asunder. It seems that Kit Siang and company may put their eggs in the same basket with Anwar Ibrahim. At what cost to their own credibility and future political worth is a risks Kit Siang seems prepared to take for immediate political gain...for Kit Siang seems to think that Pakatan Rakyat will survive this crisis in its present form.

What about those within PKR?

I think Azmin Ali loves PKR more than he loves Anwar Ibrahim and there are enough within PKR today who are prepared for what is to come.

And what is to come is that in Khalid Ibrahim, Anwar Ibrahim seems to have met his Nemesis.

In PAS Anwar Ibrahim has met a political party that puts an individual morality and credence above any political agendas.

And Anwar Ibrahim has run out of people he can fool......