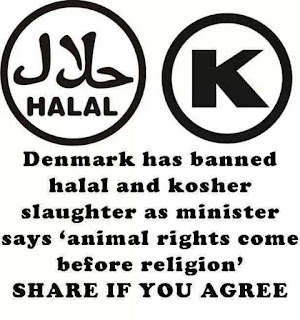 Saturday 12.13 PM. I have just came back from grocery shopping. Got the usual stuff - meat, fish, vegies, food for the cat and fruits...lots of fruits. I normally do my shopping at COLES in Smith Street close by. 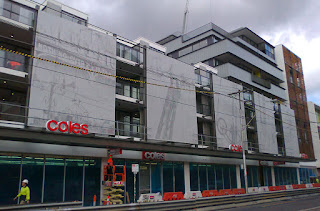 Today I noticed that Coles have moved the Pork section to a location all by itself rather than in one section together with all the other meat. It must have been done recently to cater for the sensibilities of the many Muslims that shop there.  It makes good business sense to not upset any of their customers whatever their religious beliefs.

When I came back and powered on my MAC i saw the above posting about Denmark banning halal and kosher slaughter on my FB page.

My immediate reaction to that was one of disappointment. I was disappointed that Denmark, which I consider to be a country that understands unity in diversity, does not seems to respect the rights of people who partake only halal and kosher meat by this ban.

There can be many reasons to ban anything to suit your own personal likes and dislikes.

There was a time when the duly elected government of Germany imposed strict residence regulations upon the Jews forcing them to live in ghetto and the subsequent Nazi-sponsored legislation marginalized and disenfranchised Germany's Jews. The Germany of today would never dream of doing the same thing.

Today the government of Denmark sees it fit to ban halal and kosher slaughter of animals because " animal rights comes before religion". They have decided that the rights of animals are above the rights of humans. That is a matter of choice, and as much as I love animals, putting animal rights over human rights is something I would have to think about. However having said that, what Denmark has done,  is the prerogative of the elected government of the day to do if they so desire.

I get upset when a church is asked to take down a cross because it disturbs the sensibilities of the Muslims living nearby. By the same token I also get upset when Denmark does not allow the slaughter of animals for halal or kosher meat for whatever reason.

It is, so the British say, simply not cricket. What say you?