Najib Razak has now come to realised that corruption is corruption even in MECCA!


Everything must be done according to the law and the Constitution, says PM.


steadyaku47 comment : He knows the people wants him to leave. We know he listens and hear the rumble of discontent and contempt for him that intensifies by the day. He sees himself and his wife  being constantly depicted and disrespected as clowns, kleptomaniacs and thieves in writings on the walls, on the NET and everywhere else that openly tells him of our frustrations in the manner he conducts government to benefit his personal self and his cronies. He reads and understand the depth of odium and disgust the people are expressing everywhere for him and his wife.  All that he senses around him tells him that the country and its people no longer wants him as their leader. The intensity and adversity of these vibes not only troubles him daily but has now force him to vent the troubling thoughts within himself:.
..."elections are the only way to change the country's leadership" he says!

This coming from a man who has billions of unexplained "donations" in his personal account!
This from a man who became prime minister not though an election but because he was complicit in the removal of his own leader before the end of Pak Lah's term of office.
This coming from a man who received less votes and yet became prime minister while the rightful victor of that election is jailed.
This from someone who is already...I repeat...already...the subject of criminal investigations by four governments for criminality in financial transactions estimated to be in the hundreds of millions.
This coming from a man who heads a government already embroil in skulduggery, scams, swindles, harassment, intimidation and murder of those they consider a threat to their hold on political power.
The words that he utters seems to make sense but like the proverbial sheep boy who shouted "WOLF" once too many a times, to too many Malaysians, Najib Razak is a liar who is no longer believed even when he is telling the truth.

Are elections the only way to change the country's leadership? Ptui...did not his own father
became prime minister in the same manner as he did - by default - because their predecessor left before they finished their term of office?  And in both instances the leaving of their predecessor were their own doing?

And he talks about rule of law? Huh! Kugan, Teoh Beng Hock, Aminurasyid, Altantuya, Ahmad Sarbani, Kevin Morais, Hussain Najadi and many more - all of them are dead because PDRM and MACC follow the rule of law to the letter?
Anwar Ibrahim, Mahyuddin, Gani Patail, Mukriz ...are not all these individuals and many more the victims of your interpretation of "the law?"
Najib Razak has now come to realised that corruption is corruption even in MECCA! 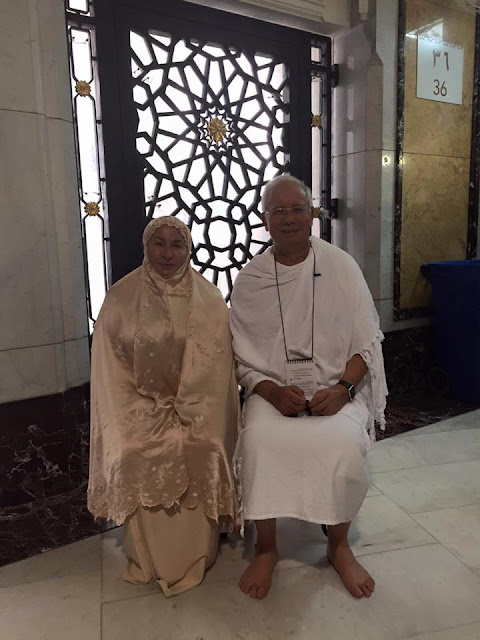 Nothing will save him and his wife anymore! Least of all prayers or the rule of law that he has abused and used time and time again for his own political survival and agendas.
Let us be comforted in the knowledge that Najib Razak is more than troubled by the tidal wave of odium, contempt and disgust that millions of Malaysian now have for him.
He is not only troubled, but, by his utterances, we know he now fears that his days in Seri Perdana is inevitably coming to an end.
The relentless assault on his personal self, on his flop of a FLOM, on his leadership in Umno and in government, on his sense of greed and entitlement has become too much for him to continue to ignore and it now eats into his own sense of self worth  - enough to make him question if he will still be in office tomorrow!
We have before us the responsibility of making this pathethis excuse for an eldest son, this scumbag that is the very essence of greed and the very example of what any leader in any country should NOT be, this useless MP from Pekan, this so called statesman who has brought shame and embarrassment to Malaysian as the world has now placed our nation among the most corrupt in the world.......we now have the responsibility to make that final push that will rid our people, our country and our future...rid us of this bogus Bugis Warrior and restore once again to our shores a sense of accountability,responsibility, decorum and grace among those who think themselves capable of leading us all to the Malaysia that we all aspire for!
So let us all not forget what we have to do.....