Vanity thy name is Rosmah! 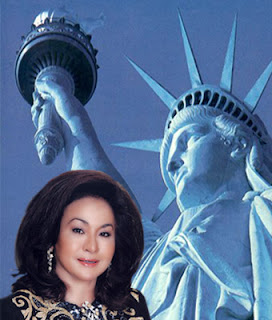 What must posses this women to sanction such air brushed images of herself? Was she ever this good looking once to be able to give the excuse that this images was of hers taken many many many (aisehman I think maybe too many “many” here…but maybe just one more “many” lah just to be on the safe side)..…many years ago and now used without her permission or her knowledge? Cannot lah! Even Najib must be unable to keep himself from sniggering when confronted by this image of his “controlling” beloved!

Methinks to be more precise the whole F@#*&i# nation must be killing themselves with laughter…holding on to their perut, swaying from side to side and breaking out into wave after wave of ha ha ha…ho ho ho and hee hee hee…falling all over the floor and always with the “coming from the gut” kind of laughter…which is exactly what the doctor ordered in order to give us some respite from these horrendous times that we now find ourselves in! Just picture the three Bujang Lapok – Ajis, Sudin and Ramlee - trying to make sense of the images and the “real thing! Impossible they will say!

Remember what Bubba said in Forest Gump about what can be done to prawns?
“Anyway, like I was sayin', shrimp is the fruit of the sea. You can barbecue it, boil it, broil it, bake it, saute it. Dey's uh, shrimp-kabobs, shrimp creole, shrimp gumbo. Pan fried, deep fried, stir-fried. There's pineapple shrimp, lemon shrimp, coconut shrimp, pepper shrimp, shrimp soup, shrimp stew, shrimp salad, shrimp and potatoes, shrimp burger, shrimp sandwich. That- that's about it”
If that much can be done with the humble prawn then I do wonder what the “First Lady” has been doing to her face to keep getting younger by the day - (and only her face because thankfully other parts of herself are undercover–though there are bulges here and there which cannot be ignored by all and sundries). I guess the phase “ageing gracefully” is not in her vocabulary! I am not trying to be mean here…I AM being mean!
But jokes aside…is it not sad to have the wife of our Prime Minister believing so erroneously that she is that women in the pictures in the newspaper. More worrying does our Prime Minister condone the audacity of this women to try and stop the vestiges of ageing in the manner that King Canute contemptuously attempted to stop he waves! It would seem that Rosmah and Canute believe in the impossible. Canute cannot stop the waves, as Rosmah cannot grow younger everyday. Rosmah if you persists in this audacious attempts of staying Father Time –then like Canute the proof of the pie is in its eating. When the time comes for you to “berdepan dengan Rakyat” during the "turun padang" moments then you will hear the children tell us all that “the King has no clothes” ..Or am I simply wasting my effort to bring some semblance of normality into her life? But here again I hear the refrain from Mrs. Gump “What's normal anyways?”
In closing I again quote the words of the immortal Forest Gump “That's all I have to say about that” If you think this is an attempt to make fun of a women who is obsessed about projecting air brushed image of herself to the public then I can categorically tell you that it is!