Anonymous said...
From one anonymous to another, we live in a somewhat democratic country where you are told what to think, do and pray but for me, calling these people, old buggers, is indeed is a very enduring thing. Well, let me put it in another way, the 25 odd buggers if you add up their ages together that figure would exceed 2000 taking you to the time of Christ.It is a bugger of a figure.
Had I labelled Pensioners Party goers, I could imagine what the reaction would be.
But like you I was looking towards a change in government] it didn't happen so I was just as disappointed as you were.
Do you really think these buggers would make a dent in the next election ?
Thursday, October 31, 2013 at 12:06:00 PM GMT+10:30

Hussein ABDUL HAMID said...
anon 12:06:00 let me tell you my story. About three years ago I sent a comment to one of my classmates blog - on what and about what I cannot remember with clarity. But I remember that two other bloggers took the trouble to tell me that they liked what they read - those two Lita and Pat - are responsible for me starting this blog steadyaku47. I now have over 2.6 million clicks and done over 4000 postings. 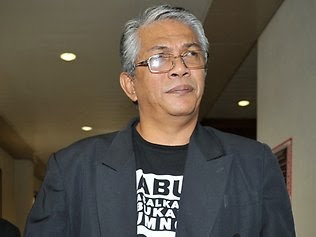 As for Haris....I am the better for making his acquaintance.
Posted by STEADYAKU47 at Thursday, October 31, 2013 No comments:


The most wrenching stories always begin the same way: it was just a normal day.
Last Friday was just a normal day when Darnell Barton, a school bus driver in Buffalo, N.Y., was carrying a full load of high school students and approaching the Scajaquada Expressway overpass.
There, he saw a woman on the opposite side of the rail, standing where no person ought to be, leaning out over the traffic below.
Barton stopped the bus, according to the Buffalo News, and tried to assess the truth of what his eyes were telling him.
“I didn’t think it was real with everything else going on around her," he said.
"Traffic was proceeding as normal and a couple of pedestrians walked right by her and a bicyclist rode by. I mean, they were inches from her.”
Barton stepped out and began talking to the woman, who looked at him and didn't respond.
Inside the bus, students were weeping. So Barton edged toward her and finally got close enough to reach out.
“She turned back to look at me and then back at the traffic and that’s when I kind of lunged and got my left arm around her body,” Barton said.
“I asked her, ‘Do you want to come on this side of the guard rail now?’ and that was the first time she spoke to me and said, ‘Yeah.’ ”
They both sat down together on the sidewalk. The woman looked at Barton, who'd splashed on a little extra cologne that morning, and said, "You smell good."
He sagged with relief, knowing that she had come back to reality.
Within a few minutes, emergency service personnel had arrived on the scene. Another bus came to take away the students. Barton received a standing ovation from his students and praise from the Niagara Frontier Transportation Authority. And then he went right back to work to finish his route.
Posted by STEADYAKU47 at Thursday, October 31, 2013 1 comment:

Its Constitution states that the society shall be a non-profit making, non-governmental and politically independent association which is non-denominational, humanitarian and shall be a charitable body dedicated to the promotion and preservation of harmony amongst all people in Malaysia, citizens and residents, irrespective of race, ethnicity, religion and background.
The group shall in due course be applying to the Registrar of Societies for registration. It shall be a national body with branches set up in all the States after its registration.
Amongst the objectives stipulated in its Constitution are:
The Society shall concentrate on the promotion and development of good, respectful and healthy relations between all people and a harmonious environment of friendship and relationship between people and communities of diverse ethnicities, creeds and faiths. The objectives of the Society are as follows:
5.2 To promote the spirit of charity, humanitarianism and volunteerism amongst all members of society;
5.3 To educate and make all people more aware and more understanding of the similarities and differences in the cultures, traditions, beliefs and practices of the various communities in Malaysia;
5.4 To protect and defend the rights of all people to truth, justice and peace;
5.5 To collaborate with other bodies, agencies and parties holding similar objectives or pursuing similar interests.
Membership to the Society shall be open to all Malaysian citizens who have attained eighteen (18) years of age and who subscribe to the objectives of the Society.
Members have so far been recruited from Kuala Lumpur, Selangor, Perak, Penang, Johore, Kelantan, Negeri Sembilan, Malacca and Sabah.
Those amongst you who share the same objectives and may wish to know more or sign up as members can contact the organisation at  harmonymalaysia@hotmail.com
Posted by STEADYAKU47 at Wednesday, October 30, 2013 6 comments:

What to do the next time the mata mata in the patrol car escorting the VVIP starts waving his hands like an orang gila and asking you to get out of the way anywhere on OUR road! Learn from the Russian!

A story to warm your hearts : A blind girl sings while she reads the lyrics in braille!


A young blind girl from the Philippines is taking the web’s breath away with her rendition of Cyrus’ "Wrecking Ball," sung while she reads the lyrics in braille.
The crooner is 11-year-old Joyce Jimenez.
She lives in Luzon, the largest Philippine island.
Commenters are saying Joyce has "a soul of an angel" and one person even wrote “This little girl did what Miley failed to do with the original - bring me to tears.”
We would love to hear more from you Joyce, don’t stop singing!