steadyaku47 comment: I do not know who this "OutSyed The Box" guy is but he writes things that people should read - so once again I am posting his article in my blog.


Najib took commercial flight home, Wifey took official jet to Indy, Najib pleads with Ministers to get back to work

I find it strange that the Boss has to instruct the machais back to work. Do they need to be told? Five states have been under water for a week now. Surely every Ministry has a role to play - perhap even Foreign Affairs.

I believe this Blog is read by a lot of people who want  to see good things happening in the country and for our people.

Please be aware that the gomen does react directly to the Blogs. Because the mainstream media CANNOT write the same things that the Blogs can post. The mainstrem media is propaganda. The Blogs bring up real issues.

You may not agree with the language or the style but I talk real issues. Dont waste time.

The PMO also reads my blog diligently but I doubt they have the best interests of the country at heart. They are just bungkusing their nasi lemak.  They waste time and money to neutralise my comments by hiring semi educated, non English speaking bangang fellows to say nasty things about me. Thats not how it works.

Here is your problem PMO guys - "you cannot make a silk purse out of a sows ear". Pi cari kat idiom bahasa inggeris apa maksudnya ok.  This applies to you and your boss. This is the problem.

The PM has been screwing up since the day he took office. They screw up everyday. Here is another screw up picture : 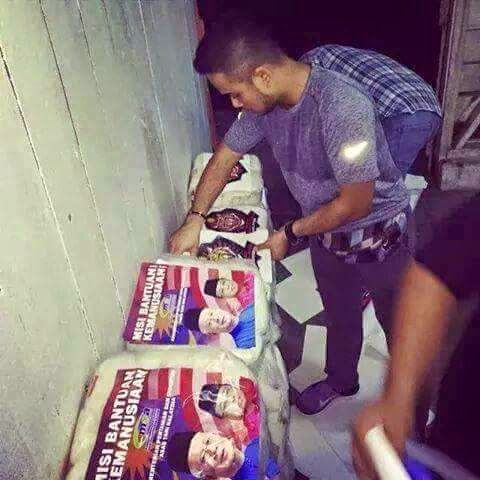 These are emergency supplies for the flood victims - from Ministry of Agriculture.

The guy who sent me this said this "pasting the PM's picture" wasted plenty of time. The relief supplies could not be sent out until they had finished sticking the PM's face on all the bags. This is the same as the 'I love PM' crap that went up during the elections.

Now here is something interesting. The PM did not fly directly from Hawaii to Kelantan. Folks say the PM returned on a commercial flight from Hawaii to Kuala Lumpur. Malaysiakini has reported almost similar (read below).

So the First Lady of Malaysia did not bother coming home to meet the flood victims. But  she has an office in the PMO  called  'Office of the First Lady'??

Najib returned home to KL first on a commercial flight. Tukar baju, tukar flight and flew back from KL to Kota Bharu.  Everyone thought that Najib had flown directly from Hawaii to Kota Bharu.  I thought the same.  Rupanya we have been had.

PM puts flood victims before family
4:00PM Dec 28, 2014
However he appears to have taken a different plane from the government jet that had ferried him to Hawaii.That carrier went the opposite direction to Los Angeles before ending up in Indianapolis, Indiana, where it has remained till now, according to data on flight tracking website Flightradar24.
Read carefully folks :

However he appears to have taken a different plane from the government jet that had ferried him to Hawaii.That carrier went the opposite direction to Los Angeles before ending up in Indianapolis, Indiana, where it has remained till now, according to data on flight tracking website Flightradar24.

So this is what has been really going on. I believe the Malaysian taxpayer has provided the Prime Minister an official jet (more than one) so  that the PM can attend to important matters of State, including returning home as quickly as he can to oversee relief efforts during natural disasters.  (OK lah if the PM wants to use it for his holiday - I dont mind.)

But it looks like the PM left  the official jet for his wife's personal use to continue her holiday in Indianapolis.  Then the PM spent even more taxpayers money to take a commercial flight back home to Malaysia. Pasal apa bayar duit dua kali?

Since when does the PM's wife have the right to use the official jet for her private holiday - without the PM?

If she has an  "Office of the First Lady of Malaysia" in the PMO with a full budget and staffing then why not the First Lady also cancel her holiday and return home to be with the flood victims?

If the PM is going to use commercial flights then why the need for official jets?

And where is the sense of urgency? The official jet would have flown the PM directly from Hawaii to the flooded area in Kelantan.  A commercial flight will not be as urgent.

The greater urgency was using the official jet to send the wifey to Indianapolis.

Now  here is that picture that appeared on the PM's own TwitterPage yesterday (?) 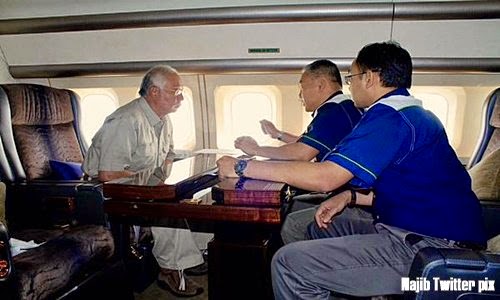 I dont know about you guys but to me this picture gives the impression that the PM is busy conferring with his "flood disaster" advisers in his official jet somewhere high over the Pacific Ocean while he was racing back from Hawaii to  Kota Baru.   Such a concerned Prime Minister. What a guy.


Honestly that was the impression that I got.  But that was not the case.

What plane and what flight was this? Was this the PM's flight from KL to Kota Bharu? Because he was wearing this shirt in Kelantan.

More importantly how did these two guys get on board another official jet with the Prime Minister? Did they buy tickets? Or did they pay any money?

Lastly what was the purpose and the intention of the PM putting this picture on his own Twitter Page?
Posted by Syed Akbar Ali at 2:23:00 PM