The SULTANIZATION of UMNO leaders. 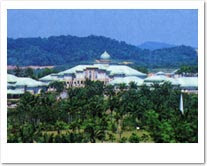 Over the years we have seen UMNO assuming the role that was once the prerogative of the Sultans of the various states in Malaysia. A process started by the British and ironically concluded by the Malays themselves albeit through UMNO. These Sultanization tendencies have evolved over the years to what it is today – an UMNO President living in splendid isolation in a palatial palace call Sri Perdana in Putrajaya surrounded by all the trappings of wealth and power. But I am ahead of myself.

The quest by UMNO leaders towards their Sultanization started with a partiality to ostentatious consumption – Mahyuddins very costly shirts, silk ties, expensive, expensive suits, expensive cars, and grand houses. Khir Toyo’s palace is the manifestation of these tendencies to a T. The Prime Ministers motorcade, the legion of people that seems to be around him everywhere he goes and the splendid, splendid office at Putrajaya is par for the course. Of course to maintain this lifestyle on their meager salaries as Ministers and YB’s meant that they were all susceptible to corruption on a grand scale.


Personalization of authority. In Malaysia all power resides with the Prime Minister. In the state the Mentri Besar title says it all – BIG Minister. This concentration of power in the PM at Federal level and the MB at state level can only gives rise to the politics of patronage and nepotism as all largeness flows from these leaders. The wholesale change that is the norm whenever there is a change of these individuals gives rise to the ‘make hay while the sunshine’ mentality. So where the Sultan was ‘king’ in his state it is now the Mentri Besar that dispense favor to the Sultans – in business opportunities, in extending credit to pay gambling debts, in keeping under lid the excesses of the Royal family.

Historical Identity. Like the Sultan who are normally descended from an immediate family tree – UMNO too are comfortable with accepting it leaders when they are descended from families that are closely associated with UMNO - possibly with the exception of Mahathir – because his Indian background precludes that possibility. But at times even when your Father is a A class leader  their genes are known to skip a generation or two. How else can you explain Najib and his cousin Hishamuddin?

For now the Sultans still cling to being the head of religion in their own states. But we can see this too is increasingly becoming the function of the religious authorities – whose salaries and appointments are the function of the central government – controlled, for now, by UMNO. So effectively even in these areas UMNO will have a say if not effective control to do as it wish – with just a nodding familiarity to the Sultans as a mark of respect.

So in reality these UMNO leaders – have not only taken power from the Sultans but have also assume, for themselves, the Sultanization of their own self in the mould of the Sultans that they have now deposed in everything but name.

While the Malays are always seen to be loyal to their sultans and are expected to obey their commands unquestioningly we are all aware of what Hang Tuah had to do to appease his Sultan. Kill a loyal friend – Hang Jebat. I do not think any Malay will any longer want to kill a loyal friend against a pretender to the throne calling itself UMNO. Not when the Sultanization of this pretender was done without due consideration of the rights and aspirations of the Rakyat.