1. When the 5th PM took over, it became obvious he was incompetent and unable to govern the country and grow its economy. He was seen as weak by the Malays as well as by the Chinese and Indians. He flipped-flopped, making decisions and policies and reversing them, arresting opposition members under the ISA and then releasing them shortly after, claiming that he wanted to protect them. 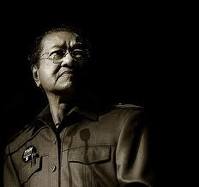 
Tun you said that when the 5th PM took over it was obvious he was incompetent and unable to govern the country and grow its economy.

Was it not you who choose this obviously incompetent 5th PM to succeed you?

As you choose Musa? Musa teamed up with Ku Li. The final ramifications of their challenge to your leadership in UMNO was the declaration of UMNO as an unlawful society due to the existence of several unregistered branches and the purge of ALL Team B members from your cabinet despite your early pledges not to do so!

As you choose Anwar  - and we know what the ramification of that decision is now! It resulted in the loss of the two third majority long held by BN and the coming into being of a credible Pakatan Rakyat opposition. I know you will rue the day when you did make that decision to give Anwar the oppportunity to be what he is now –leader of the oppposition! The final ramification of your decision in appointing Anwar as your deputy will only be played out in the 13th general election – a general election that you are evidently aware is there for Pakatan Rakyat to lose! Not for UMNO to win!

And now Abdullah Badawi. You choose him did you not? And did you do so knowing that Abdullah was incompetent in the hope that there was a way you could still crawl back into the PM seat after you have agreed to leave? Then when Abdullah did not put a foot wrong as DPM and you were forced to leave, you had hoped that he would protect your so called “legacies”  - like the crooked bridge, Putrajaya and the many financial abuse you promoted under your PM tenure? But that was not to be. Incompetent as Abdullah may be he was not about to let your abuses be kept under wraps. And so began, to your anger, the unravelling of your years as PM.

Three DPM all chosen by you TUN  - all failures (by your reckoning) and are all these three DPM to be blamed for the pathetic state that UMNO is now in? Or maybe...just maybe you might have had a hand in all this failures? Do the sums Tun  - three DPM's all chosen by you and all to be blame for UMNO's current woes? These were just DPM's - you were the one in full control of UMNO and the government! You are the one who must take responsibility!

Everyone else to be blamed for the massive financial abuse of high office by UMNO politicians – abuses that occurred under your watch?

Everyone else to be blamed for the hideous proliferation of money politics within the ranks of UMNO and BN – abuses that you TUN conveniently closed one eye and shut the other?

Everyone one else to be blamed for the greed and nepotism that you personally encouraged – look no further then your own family – and the clarion call  put out to all Malays – join UMNO and become rich beyond your dreams! And money politics became UMNO’s culture and a way of life for all of UMNO’s political elite! All this could only be done with the overt and tacit approval of the President of UMNO, the PM of Malaysia – you TUN! You! You! You!

You too presided over the prostitution of the Malaysian Judiciary who unashamedly did the biddings of their political UMNO master and is still doing so! The CJ is not compliant? Sack him! Judges are not compliant? Replaced them! The AG becomes the running dog of the BN government. PDRM became thugs and goons who operated under your ‘guidance’ to impose their physical might and brutality on your own people using the ISA and what ever means under their disposal to ensure that the people were kept subjugated to your wants!

And I can go on TUN…but I think that is enough for now. This is just another way of looking at how things really were under your rule. You are entitled to your opinion and so am I. The proof is in the pudding. The 13th general elections will be your final political curtain.

The 12th general election was your Waterloo – it already cemented your place in Malaysian Political history – it is a lesson learned – all future political parties in Malaysia would ensure that there would never be the possibility of another Mahathir! A Mahathir that will stay beyond his use by date! A Mahathir who believed that any means could be used in as long as it justifies the ends as he saw it – not for the good of the nation but for the purpose of keeping this Mahathir in power forever and ever! And a Mahathir that used any means at his disposal to divide and rule not only his own UMNO party and his Barisan Nasional partners but also his own Malay race and the people of Malaysia. And a Mahathir shrewd enough to know that he would rather have Ministers who were corrupt and weak of the flesh in his cabinet because it would be so much easier for him to have them at his beck and call.

TUN it is time you looked within yourself and see yourself for what you really are. A mean old man who thinks the whole of Malaysia owes you a living! You need to take responsibility for what UMNO and BN has now become – a feeble political organization riddle with money politics, greed and arrogance incapable of winning power in the 13th general election. And when the 13th general election is done…so will you be


Sir you need to take responsibility!

Tan Sri Abdullah Ahmad, group editor in chief of the New Straits Times, wrote (June 26 2002), “[Mahathir] has...created a legacy so monumental that no one could have presumed his mantle.”

That was what Abdullah Ahmad gushingly said of Mahathir when the great man (Mahathir lah!) announced his resignation on June 22 of that same year. “Hear! Hear!” I say…or as Antares succulently said for the benefit of Ibrahim Ali, “Dengar, Dengar!” I believe that that came from Abdullah’s heart for you cannot write anything so ‘moving’ if it does not come from the heart. Now let me tell you what comes from my heart when I read that.

Who would dare to presumed the monumental mantle of this Mahathir who was instrumental in bringing into our way of life such concepts as ISA, nepotism, money politics, greed, privatizations, IPP’s, Perwaja, utter vindictiveness to those that simply do not agree with his point of view, negotiated tenders, a tainted Judiciary, Bakun, crooked bridge, Renong and its horrendous debts, Khir Toyo, Daem, and the list is endless. Every government machinery, every high public office appointment, every political decision made during Mahathir’s time was at his pleasure and made to do your biddings!

What defines greatness in a man?
"It's not what you take but what you leave behind that defines greatness.” – Edward Gardner.
This man left us with debts measured in billions not millions!
This man left us with monuments of First World stature but failed miserably to prepare our then third world mentality to be ready for these iconic structures. If you bring a nation into an era that it is not ready for, you are being irresponsible!
If you cut corners and award projects to people who YOU think can do the job and they fail to do that job – you take responsibility!
If you do nothing about a leader that robs his own people blind –like Samy Velu did to the Indians – then you take responsibility.
If you take power away from the Sultans and empower UMNO with the same power  - and UMNO abused that power – you take responsibility!
When you remove two of your deputies – and in so doing caused:
1)   Within UMNO factionalism that forever weakened UMNO
2)   and had one of these removed deputies, Anwar, to come back ten years later and inflict upon UMNO its biggest defeat.
You take responsibity.

When you take a dentist and make him MB of Selangor – and this MB then proceed to enrich himself excessively that finally culminated in the loss of  Selangor to the opposition – then you take responsibility.
When you take Oil Royalties from Trengganu and Kelantan because the people voted for the opposition, you take responsibility for the suffering of the people within that state who are now without the funds to develop the state.
When you use Petronas money and to bail out your son shipping company to the tune of hundreds of millions using people’s money then you take responsibility for abusing the trust the people placed in you as the guardian of their money.
That a man of your previous stature would require me, a 62 year old man living in Adelaide to write this biting and hurtful article about you simply indicates the depth you have allowed yourself to sink to. This would not happened to the Mahathir that was PM for 22 years – who brooked no challenge to his rule for those 22 years! How things have changed!
You told us to look East. We looked East. You told us to buy British last. We bought British last. You told us to buy Proton we bought Proton – albeit with a little arm-twisting. Possibly all these were relevant at that point in time. So Tun using that analogy, let me respectfully tell you this Tun. You are no longer relevant.
You are no longer relevant in UMNO except to serve the selfish purpose of certain factions. “Dengar dengar!”.
You are no longer relevant to the Malays. You have done enough damage to us and we see thorough your deceptions.
You are no longer relevant to the people in this country. We have all moved on and demand a more open and responsible government. We see through your duplicity and untruths.
Tun you are only relevant to those that still loves you for what you are – a grandfather, a father and a husband. Is it not time that you return their love and their need to have you back in their fold? And that you return the love and respect that they give to you for what you are today? An 84-year-old grandfather, father and husband?
Sir you would need all the goodness that is in Mecca, all the forgiveness that Mandela has shown to the very people that imprisoned him and all the love that the family of Teoh Beng Hock, Kugan and Aminurasyid have for their love ones if you are ever to be forgiven by the people of this country. And I know that even with all that you would still have a hard time walking down the streets of KL without worrying that someone  might spit on you…and that Sir is the whole truth and nothing but the truth…so help me God!
----------------------------
with thanks to  doggone, November 04, 2010 16:46:55 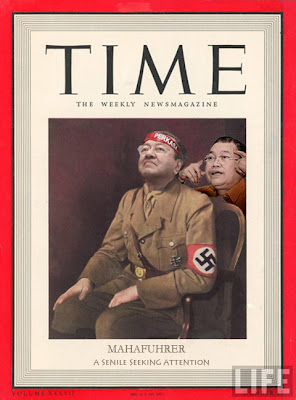