Methinks the Sultan of Selangor does too much.......

It is wrong to have as our ambassador someone whose morality is questionable. It is wrong to appoint a corrupt politician to be Chairman of Felda – an authority where billions are held in trust for the benefit of Malays who depend on Felda for their future. It is wrong to allow any Minister another day in office if there is that possibility that he might be involved in the rape of a foreigner – in this case an Indonesian maid. Yes we know he has not been found guilty of any crime but this is where our integrity as a nation rests. Until he is completely cleared of that suspicion he does not have our trust to stay in office. What is worrying is that our Prime Minister does not share our concern – the frisky ambassador, the corrupt politician and the likely rapist  -should be held to the same standards that we would expect of any ordinary Malaysian. It would seem that those in high public office are not subject to the same standards of propriety that we expect of ourselves and from our peers. That our Prime Minister is guilty of condoning these wrongs speaks volume of his sense of decency.

And now like Perak, they are using a Sultan to do their dirty deeds for them. Using the Sultan of Selangor to ‘legalize” the appointment of the State Secretary. We all know that the Sultan Of Selangor is beholden to the Barisan Nasional government for his daily bread. He has been making a good deal of money from his many business dealings where, for the most part, the BN government have chosen to quietly overlook indiscretions that he has committed. And now they are calling in the markers they have been keeping on this Sultan of Selangor. If the Sultan does go in to bat for the Barisan Nasional over this appointment of the State Secretary, then I think he will be opening himself up to a number of issues. 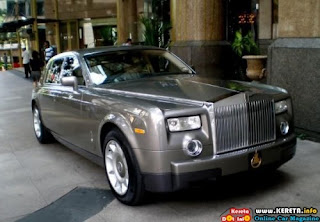 ROLLS ROYCE PHANTOM
owned by the Sultan Of Selangor

His personal life for one. Let me get more to the point – this Sultan, who is the head of Islam in his state  - fucks around with girls in and around Kuala Lumpur. You fuck around with the appointment of the State Secretary, we fuck around with your fucking around. We can start with that non-Malay girlfriend of yours that have served as your regular fuck for a good number of years. You might think it all good fun and it really is until you realize that the Internet will tell what the newspaper will not! So tread carefully and think what it is that you are doing. Go on living your useless life paid for by the people’s money and leave politics well alone. Interfere with politics then you and your brother Sultans might see the end of your reign as the Maharajahs in India have seen the end of theirs sooner then you think.

How the Sultan of Selangor protect his whorehttp://pr.bonology.com/2010/12/how-sultan-of-selangor-protect-his.html

Hi Uncle Hussein....
Once upon a time, (abt 20 yrs ago) he loves to hang up & bottle's up at HARDCOCK Cafe, Kuala Lumpur with a bunch of bikers.( I was there). He normally rides with no Helmet,(now with Nazi Style Helmet) Everytime he rides, he will be escorted by few big bikers with 2 police traffics.What a shame & stupid Malaysian Malays to honour a guy with HEAD OF ISLAMIC state who love to MINUM ARAK...He used to COLOUR his hair (blonde to be exact).. Recently he went to Amy & Awie's Double Trouble Concert in Mount Kiara, KL. also riding his HARLEY with a few bikers & not to mentioned, escorted by 2 police traffice as well.(I was there too)...
- KAMPONG MALAYS ARE DAMM FUCKING STUPID - THIER HEAD OF ISLAMIC STATE LOVE TO DRINK (not drinking TEH TARIK LAH).
- THIS HEAD OF ISLAMIC STATE LOVE TO RIDE BIKE ESCORTED BY POLICE PERSONEL EVEN WHEN HE RIDES FOR HIS SOCIAL/PERSONAL INTEREST...(wonder why Dato Ramli was being charged when he travel wih ;POLICE'S HELY...and bla bla bala....
JUST SHARING MY THOUGHT.................
HARDCOCK = HARDROCK.....he he he

written by singhkris, January 01, 2011 14:08:16
The head of Islam in the state goes around F**king in the state. Khalid please have the case authenticated with reports, call for the debate in the state assembly and put an end to the rule of an unislamic ruler! The former queen (Sultan's mother or step mother?) is also reported to be screwing around. It was in the Singapore papers!

So he wants to fcuk around with politics. . ., let's give him a damn good fcuk tha he will not forget!

For starters, anybody has any info on Kavita Kaur? Open the floodgate, please!