Inside the “no fire” zone Najib sits uneasily. There is clear light with visibility from one to two miles ahead. There should not be any incoming enemy fire! But those in UMNO can shoot further than they can see and at time deliberately mistake friend for foe so friendly fire is always a hazard in UMNO! 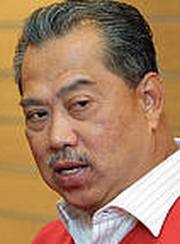 Najibs troops and Muhyiddin troops are at “stand-to” waiting to see who will blink first. Najib tells his troops to “check fire” but Muhyiddin troops would rather shoot first and ask questions later. There is no good leadership and well disciplined troops to prevent a disaster….and friendly fire is never friendly – as Najib will attest!

All the above are people who are the cause of or have been the victims of friendly fire in which Najib Tun Razak has suffered all manner of wounds because he is either in the line of fire or failed to take cover when they shout “INCOMING!”

All preventable. All could have been avoided. All “casualties” caused by over zealous sahabats, machais, orang suruhan, all do gooders with Najib’s interest at heart ….who in all their questionable wisdom have decided that what they do would be in the interest of Najib Razak, UMNO and Barisan Nasional! And all of them waiting to be thanked, offered promotion and cash inducements in the mistaken belief that by doing what they did they will earn the undying gratitude of Najib Tun Razak.

And all of them, as what friendly fire invariably does do, have caused extensive, critical and possibly mortal damage to Barisan Nasional, UMNO and their Alpha Male (ahem!), Najib Tun Razak!

Why? Why is all this happening and seemingly increasing in its intensity and frequency as the 13th general election nears? Coincidence? Are these the actions of well-meaning, good intentioned subordinates and supporters that have somehow got their signals confused? Or more sinister for Najib Tun Razak is it time? Time to go?

Is it time for Najib to look at his options?

Option number one – numero uno! Is Muhyiddin his trusted deputy or his Judas? Will Muhyiddin do to Najib what he did to Pak Lah? This man Muhyiddin, whom Pak Lah thought could be depended upon to watch his back while he was confronting Mahathir and Najib stabbed Pak Lah in the back! I am sure that Najib now breaks into a cold sweat just thinking of that possibility happening to him. Nyawa di hujung pedang!

Option numbers two: Mahathir! What has Najib not done to placate this Grand Old Doyen (GOD) of UMNO? But he must know by now that this GOD wants more then just Najib’s total submission to HIM. He wants Najib’s soul, Najib’s undying gratitude for making him PM sooner then Najib thought possible and most important of all, Mahathir still wants to be the Alpha Male in UMNO! And Rosmah said “NO CAN DO!” And what Rosmah wants Rosmah gets! So you can scratch Mahathir off your list of “orang kita!”

Option number three: KJ: In his haste to please Mahathir Najib threw caution and protocol to the wind. He ignored KJ who was leader of UMNO youth and instead appointed KJ’s deputy, Mahathir’s son to the Cabinet – hell might be no match to the fury of a women scorn but a KJ scorn will surely come back to haunt Najib as this 13th general election nears!  In the cold light of the dawn before the 13th general election it must be a decision that will come back to haunt Najib as he awaits KJ payback. At worse for Najib KJ is now with Muhyiddin. At best, for Muhyiddin, KJ is with Muhyiddin. Any which way you look at it Najib would be a fool to think that KJ will forget the humiliation Najib handed him by giving his deputy a cabinet post.

UMNO’s rank and file? Go back to the first paragraph of this article…Friendly Fire! You star is descending and Muhyiddin start is ascending! Need I say more?

I know that thing looks bleak for you now. Do not hold too much hope when your people tell you that it is darkest just before the dawn of a brand new day. However dark it is if you have a light you will still find your way through the darkness. You Najib do not have any light. You are up a creek without a paddle!

Even self imposed exile to that country from where your future son in law hails from does not look too good for now – what with all the problems he and his mother are having with the authorities!

Maybe you might draw some inspiration from the life story of this man:

But then Najib, you are not Abraham Lincoln…are you? Not even the power of positive thinking can get you there! You position seems so hopeless that the only appropriate response can only be laughter. Yes we do understand that your political life is at stake…but who cares?