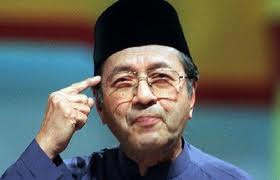 “During my time (as prime minister), I was reproached by Tengku Razaleigh Hamzah and Musa Hitam and there were also scores of people who were angry with me,” he said.
Not scores of people who were angry at you Tun…many hundreds of thousand Tun. Today they number in the millions!
And what happened to them? Tengku Razaleigh went on to form Semangat 46. Musa retired from politics. And UMNO was badly weakened and was declared an illegal entity. That my dear Mahathir is the cost of reproaching you! You went after them without a thought of what the cost would be to UMNO!

What happened to DSAI who not only reproached you but also told you that you were obsolete in your face! You asked him to resign and when he did not, you send him a letter of dismissal and sealed his office! And you them persecuted him through the courts and made it a personal vendetta that has not ended until today…and we know will not end until you are dead!  So much for you saying that leaders must be open to challenge and reprovals.

And you said that leaders should not be reproached in an angry or insulting manner! How do you explain your treatment of Pak Lah? How do you excuse the venom and the unmitigated manner you pursued your successor in and out of UMNO? Yes old man you did leave UMNO because you did not have your way with Pak Lah…and you still pursued Pak Lah even then….what do you call that?

Then you have the audacity to say that leaders should not overstay and “go when it is time for them to go”and:

“People need to give time to a leader unless of course if he is very bad, filling his own pocket, giving priority to his family and something like that. If he is not like that, then you allow him to stay on at least for another term”.
Really Tun, senility and stupidity at the same time?
Twenty two years as Prime Minister is not “overstaying!”
And you were not giving priority to your family?
Now how do we make you understand that instructing a government controlled entity to bail out your son’s shipping company is giving priority to your family? Or has senility robbed you of your ability to think rationally?
This is the bloody problem with you Sir. Everything that you do you is right. Even the murder of other Muslims during the Memali incident that occurred under your watch is right! The numerous arrests under Ops Lallang is right! Dismissal of Anwar and the the CJ is right! You inability to accept that one of your Chief Minister should have been prosecuted for raping an underage Malay School Girl is right!
If the world was to consists only of you, yourself and no one else…you may be right. And I say “may” because even you yourself (in your moments of clarity) will disagree with yourself!
Tell me Sir, when were you wrong? Will the fact that Anwar is now leader of an Opposition that may well take power from Barisan Nasional make you think that you might have done wrong in dismissing him as DPM?
Were you wrong in appointing all your DPM’s because all of them, with the exception of Tun Ghaffar, failed (in your estimations) to fulfill your expectations?
Were you wrong in your decision to “assist” Halim Saad, Eric Cheah, Amin Shah, Abdullah Ang, Tajuddin and all those cronies of yours who were given “business opportunities” by you and yet they all comprehensively failed to meet your expectations of them?
My dear Tun it has not even been a decade since you left and already all manner of brickbats and vile and unsubstantiated (so you say!) accusations have been hurled at you! Arrogant, corrupt, dictatorial, obsolete, guilty of nepotism and cronyism, abuse of high public office and I am sure the most painful accusation of all:
You were the reason Reformasi came into being, their hatred for you made Pakatan Rakyat possible and you made Anwar Ibrahim into that viable alternative to your beloved UMNO!
Huh! Tun if anyone is to be blamed for pushing UMNO to the brink of defeat even before the 13th general election…you are it!
So stop telling lies Tun. It is hard enough to listen to your endless prattling about UMNO this and UMNO that…about Pakatan Rakyat this and Pakatan Rakyat that! Let me tell you who or what you are Tun.
You are a pathetic old fool who is no longer relevant to our Nation, no longer needed by UMNO and held in utter contempt and disgust by enough of our people to give you the tittle of “The Most Hated Man” in this Nation of ours! Amen!