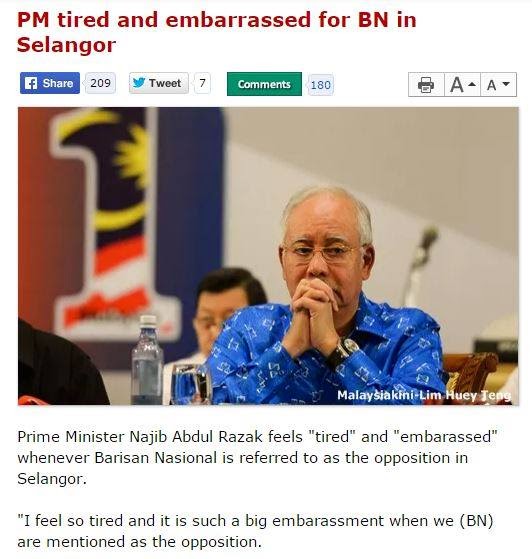 Sir do not feel dishearten, tired and embarrassed whenever Barisan Nasional is referred to as the opposition in Selangor. I know how you feel Sir because that fact is "in your face" every time you wake up in Seri Perdana, every time you take that short drive to your office in Putrajaya and every time you depart and arrive back on Malaysian soil on "your" Perdana One Jet for we know that all these places were once Selangor's....and no proclamation by the government of Malaysia can take that away from Selangor....and it must tug at your heartstrings that you are surrounded by all things Selangor...and Selangor is now in the hands of the opposition and you must feel like a pendatang menompang di negri orang. But fret not Sir for the winds are a changing.

Every day in every way you are closer to the time that we ordinary mortals look forward to : RETIREMENT....that time when the problem of being tired and embarrassed that Barisan Nasional is referred to as "the opposition" will no longer be your concern. It will be the concern of those that comes after you to lead Barisan Nasional. They will have to deal with trying to take back Selangor from the opposition. You Sir will be tripping the light fantastic all over the globe - hopefully with a private jet bought with that your retirement money and whatever small change you may have managed to save from your years in politics. I will no longer be able to call you Sir for you will now be a Tun.....and with Rosmah by your side, the world will be your oyster.

Of course you will have to hope that BN will still be in Government.

And I say hope Sir because to all intents and purposes that does seems to be possible given the times that are a changing. I know you are troubled that you will be the one blamed by BN for making it possible for  Pakatan Rakyat to take government from Barisan Nasional but again fret not Sir for the rot started with Mahathir and then was compounded by Abdullah Badawai.

You Sir did your best with whatever was at your disposal.

Yes I agree that Rosmah did not help much. Nor did your Ministers, consultants, advisers and "friends" in Putrajaya who, in hindsight, you now know were there for what they could financially gain by their "support" of you. Altantuya never did go away nor did Mahathir. As they say Sir, it never rains but it pours.

Never you mind Sir for politics in Malaysia always has its rewards...money Sir, lots and lots of money! For all I know that wife of yours should by now have a tidy sum put away for that rainy day when you will have to vacate Seri Perdana - after all she does hold the purse strings in your household.

There seems to be other things that she does hold (some infer that she has a tight grasps of your balls Sir ) but let us not believe what we do not see. What we can see Sir is you hiding behind her skirt every now and then but that may just be you playing hide and seek with those who are also after your balls. My only advise to you Sir is this : It is a well known fact that when your balls are in the hands of others your heart and mind will follow the bidding of that holder of your balls....so be careful of who you allow to hold your balls.

One other thing Sir before I take my leave.

Sir as Prime Minister of Malaysia it is pretty obvious that you are punching above your weight....that's what boxers say of each other when they are fighting against some one who are more experienced and much much higher in ranking than them.
In your present situation you have much need of true friends who can "advise" you of what to do. Sir you must listen, hear and heed the advise of these true friends. Such a friend is Tun Dr Mahathir Mohamad. The good Doctor have never been wrong before when he thinks that his many Deputies and even those that comes after him as PM were "punching above their weight". Heed Mahathir's advise Sir before shove comes to push as those around you start plunging knives into your unprotected back.

Enough for now Sir. I must be off to breakfast. It is 8.15 AM here in Melbourne. Malaysia is three hours behind so you must by now be stirring in your bed beside your Rosmah....and that alone is a fate worse than death. I would wish that fate even upon the worse of my enemies....try and have a good day SIr.