Observe the political leaders within Umno who are all Muslims : Are they not corrupt, arrogant and fornicators outside marriage with mistresses and girlfriends to minister to their sexual depravity? Are they not the very antithesis's of what Islam requires of its disciples? 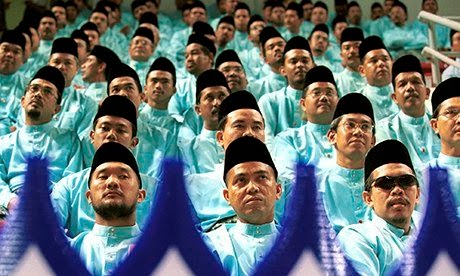 All this talk about Islam being under threat in Malaysia....tell me how many of you are prepared to stand up and say what you really think about the religion?

How many of you would have the guts to stand up and argue that Islam is no better or no worse than any other religion?

Who would have the courage to stand up and be counted by writing your thoughts about the good and bad of Islam?

Just as I thought...no one! Not even me!

You do so under pain of death at the worse or at best become the target of those who would gladly in the name of Islam cut your head off with or without a fatwa hanging over your head. I say 'at best' because even with a fatwa hanging over your unworthy head (so says the purist of the Islamic faith) if you are prepared, like Salman Rushdie and many others, to go into hiding and live your life under threat of sudden and certain death, you may still survive...and like Salam Rushdie, hopefully eventually triumph over all these threats and be knighted by Queen Elizabeth for your services to literature.

And yet there are many Muslims in Malaysia who insists that Islam is under threat in Malaysia! Huh! There are not many places in the world where Islam holds sway over all other religion as they do in Malaysia. Hold sway not only because it teaches peace, tolerance and love towards others no matter what religion they profess to practice but more insidious, Islam holds sway because this Umno led government have vested in those that claims to be its guardian, the means to impose the Islamic religion and its tenets not only upon Muslims but also upon those who are not Muslims!

These so-called guardians of Islam are embolden to arrest, threaten and physically abused Muslims and non-Muslims who they think have strayed from the tenets of ALLAH. Seize books, burn Bibles and physically intrude into the affairs of others in their place of worship and into their bedrooms where consenting adults do what consenting adults always do in the privacy of their bedroom or any bedroom. All this they do because this Umno led BN government have co opted Islam as a means to extend their political agenda in Malaysia.

This by itself in its purest form would have benefits for Islam and the people of Malaysia because a religion that teaches peace, tolerance and love towards everyone can only do good. Sadly this is not so in Malaysia.

Islam is used to advance the political agenda of an Umno that is corrupt, arrogant and self serving. Islam is used to threatened and beat Muslims and non Muslims into political submission to vote for those who also are with Umno in their political agenda of political power at all costs and by any means so that those elected will continue with the politics of race, religion and money that this nation have been subjected to especially from the time that Mahathir became Prime Minister. And the unkindness cut of all....Islam that already dominates all other religions in Malaysia is push down the throat of all of us  - Muslims and non-Muslim - by political and Islamic leaders  who loudly profess to be followers of the Islamic tenets but are deficient in its practice!

Observe the political leaders within Umno who are all Muslims : Are they not corrupt, arrogant and fornicators outside marriage with mistresses and girlfriends to minister to their sexual depravity? Are they not the very antithesis's of what Islam requires of its disciples?

Not surprisingly these are the very people that are loudest in advancing the cause of Islam because they use Islam to advance theirs! Huh! I spit upon them!

I am not writing against Islam. I am not putting down Islam. I am not ridiculing the tenets of Islam and I will certainly not in any way belittle the Islamic religion. There is nothing that is bad about Islam or for that matter any religion for all religion teaches its followers to do good. What I will put down, ridicule and belittle are those who appoint themselves to be guardians of Islam and forthwith uses Islam to advance their political agenda to profit themselves.

You know who they are.

If you point in the general direction of Seri Perdana you are not wrong. If you asks me if they are the Malay political leaders who are now walking the corridors of power in Putrajaya and the state government under BN and Pakatan Rakyat...again I would say that you are not wrong. And if you ask me if some of them are in employment by Jais, Jakim and any other religious authority given carte blanc by this Umno led government to advance the cause of Islam   ...again I would nod and say perhaps there are some there too.

Do not say that I am against Islam...what I am against are the humans who appoint themselves as guardians of Islam and then use Islam to advance their own vested agendas that not only pollutes Islam but also causes Muslims and non Muslims to resent Islam for allowing these people to profit from Islam.

My friends Islam is not to be blame for persecuting Christians and burning Bibles just as Umno is not to be blame for what their leaders have become. It is the human factor in the link between Islam, Umno and ourselves that is to be blame. The human flesh is weak, its needs and passions subject to temptations and the vagaries that the world has so much to offer to those who can be corrupted and seduced. Such is the state of our nation today because our leaders are weak of the flesh, lacking in fiber, decency and morality in their pursuit of power and personal glory. The ego is King. Materialism rules over all other considerations.

I started writing this at around 4 AM this Saturday morning. It is now close to 6.15 AM and  there is clarity in my thoughts now because I have unburden myself of these thoughts here. I must now to sleep because I have told by wife that we will go to the Farmers Market this morning. I need my sleep if I am to do what I promised my wife I will do this morning. And so to sleep.

Take what I write here anyway you want but I believe that religion is a personal choice best left to the individual and his/her God (if any) to discuss, debate and agree or disagree upon in the confines of his/her mind and his/her space without interference from any others. Amen.
Posted by STEADYAKU47 at Saturday, November 01, 2014