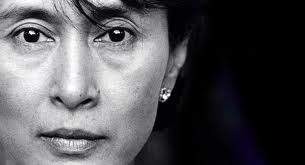 YANGON (AFP) - Myanmar opposition leader Aung San Suu Kyi has criticised a proposal by nationalist monks to restrict marriages between Buddhist women and men of other faiths, describing it as a violation of human rights on Friday.
"This is one-sided. Why only women? You cannot treat the women unfairly," Radio Free Asia quoted the Nobel Peace Laureate as saying in an interview.
"I also understand that this is not in accordance with the laws of the country and especially that it is not part of Buddhism," the veteran activist said.
"It is a violation of women's rights and human rights."
Under the proposal -- spearheaded by the controversial Mandalay cleric Wirathu -- non-Buddhist men wishing to marry a Buddhist woman would have to convert and gain permission from her parents to wed or risk 10 years in jail.
The idea was raised at a recent meeting of more than 200 monks called to discuss a surge in Buddhist-Muslim violence in the former junta-ruled country.
Wirathu said the law was needed "because Buddhist girls have lost freedom of religion when they married Muslim men".
Senior clerics have distanced themselves from the proposal while women's rights groups have voiced opposition.
Sectarian bloodshed -- mostly targeting Muslims -- has laid bare deep divides that were largely suppressed under decades of military rule which ended two years ago in the Buddhist-majority country.
Radical monks -- once at the forefront of the country's pro-democracy movement -- have led a campaign to shun shops owned by Muslims and only to visit stores run by Buddhists. Some were also involved in the religious unrest.
Suu Kyi has been accused by some international human rights activists of failing to clearly condemn the anti-Muslim violence.
Dozens of people were killed in clashes in central Myanmar in March while about 200 people died last year in sectarian unrest in the western state of Rakhine.
Last month Suu Kyi criticised a controversial ban imposed on Rohingya Muslims in Rakhine having more than two children. 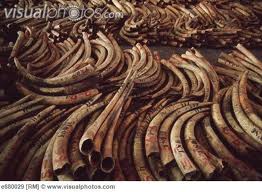 MANILA (AFP) - The Philippines destroyed five tonnes of elephant tusks on Friday in a landmark event aimed at shedding its image as one of the world's worst hotspots for illegal African ivory trading.
"This act is a strong statement to the rest of the world that the Philippines will not tolerate the illegal wildlife trade," Environment Secretary Ramon Paje said.


The Philippines was in March named by the Convention on International Trade in Endangered Species (CITES) as one of eight nations that was failing to do enough to tackle the illegal trade in elephant ivory.
The executive director of the London-based Environmental Investigation Agency, Mary Rice, praised the Philippines for taking the lead in destroying its stockpiles.
"This is a really significant event. It is the first time a consuming country and an Asian country has decided to dispose of its seized stockpiles," Rice, who was in Manila to witness the event, told AFP.
Rice said thousands of kilograms of seized ivory were sitting in storehouses in other cities around Asia and other parts of the world.
Rice and other conservationists called for all Asian countries with stockpiles to emulate the Philippines.
The Philippine efforts to destroy the tusks were complicated as the government backtracked on an initial plan to burn the tusks due to protests from environment groups about open-air fires.

A second plan to crush them with a roller was also cancelled after it emerged the tusks were too tough.
The third plan of crushing them with a backhoe, one-by-one, lasted throughout Friday. The government said the remnants of the tusks would then be burnt at an animal crematorium.


One killed as a million protest in Brazil

BRAZILIAN President Dilma Rousseff has called for an emergency cabinet meeting a day after a protester was killed and an estimated 1.25 million people rallied nationwide demanding better public services.
The mass demonstrations, which have sometimes turned violent, are taking place as football-mad Brazil is hosting teams from around the world for the Confederations Cup, a dry run for next year's World Cup tournament.
Many Brazilians are angry over the expensive preparations for the World Cup and the 2016 Summer Olympics.
Several of the demonstrations have been held outside stadiums, and a mammoth march is scheduled for June 30 to Rio's iconic Maracana stadium on the day of the Confederations Cup final.
In Rio, riot police fired tear gas and rubber bullets, then charged a large crowd of protesters after a smaller group hurled rocks at the officers.
The mounting pressure on Rousseff's government in Brazil's biggest street protests in 20 years prompted her to also cancel a trip to Japan planned for next week.
More than 1.25 million people marched Thursday in more than 100 cities across this country of 194 million people, according to police and experts quoted by the local media.
The marches began as a protest two weeks ago against a raise in bus fares, but quickly expanded into a wider call for an end to corruption in the world's seventh largest economy, a call fuelled by resentment over the $US15 billion ($A16.36 billion) cost of hosting the Confederations Cup and the World Cup.
The movement has no political hue and no clearly identified leadership.

Office workers crossing a road on Thursday in Singapore amid pollution considered hazardous to health.
The Pollution Standards Index, a uniform system used by Singapore to measure pollution, hit 371 at 1 p.m., topping the previous record of 226, which was set in 1997. Health officials consider any level above 300 to be hazardous to health.
Residents were urged to remain indoors, while air traffic controllers at Changi Airport were told to take extra precautions in directing flights. In neighboring Malaysia, more than 200 schools were ordered closed because of the pollution.
The persistence of the pollution this week has tested ties with Indonesia, where farmers in Sumatra often burn forests at this time of year as a cheap way to prepare the land for new plantings. Though such burning violates local laws, Indonesian officials have failed to stop it.
“No country or corporation has the right to pollute the air at the expense of Singaporeans’ health and well-being,” Vivian Balakrishnan, Singapore’s environment minister, said in calling for Indonesian action to curb the fires.
Indonesian officials say Malaysia and Singapore deserve part of the blame because their companies control many of the palm oil plantations where the burning takes place.
An Indonesian official struck back on Thursday at the criticism from Singapore. Agung Laksono, the coordinating minister for people’s welfare, said, “Singapore shouldn’t be like children, in such a tizzy,” according to The Straits Times of Singapore.
The problems in Singapore and Malaysia come at a time of increasing concern about pollution across Asia, particularly in China, where pollution readings this year have been at least 30 percent higher than in previous years.