PETALING JAYA: Minister in charge of parliamentary affairs Shahidan Kassim is Barisan Nasional’s new deputy whip, replacing Nazri Abdul Aziz, who is now the Culture and Tourism Minister.
By the ruling coalition’s convention, the deputy prime minister automatically becomes BN’s whip chief, whose main task is to ensure that backbenchers toe the party line and support all bills the government tables in Parliament.
Those who disobey the party whip face action from the party leadership. This was what happened to former MIC vice president S Sothinathan in 2005.
Sothinathan, who was then a deputy minister, was suspended from his duties for three months after he breached a party directive by criticising the government’s decision to withdraw its recognition of Crimea State Medical University.
PAS, PKR and DAP each has its own whip chief, but Pakatan Rakyat as a group does not.
PAS’s whip chief is party vice president Mahfuz Omar and PKR’s is its deputy president, Azmin Ali. DAP has appointed its national organising secretary, Anthony Loke, as its whip chief to replace Kepong MP Tan Seng Giaw.
PKR supremo Anwar Ibrahim has been reappointed Opposition Leader although DAP won more seats in the last election than any other opposition party.
In confirming Anwar’s appointment, Dewan Rakyat Speaker Pandikar Amin Mulia said the PKR leader had received unanimous support from Pakatan MPs.
“Based on the feedback I received, I am satisfied that Anwar Ibrahim received the unanimous support of the opposition members of parliament in the Dewan Rakyat for the post of opposition leader,” Pandikar said.
Anwar’s appointment to the post was foreshadowed on the day after the May 5 general election, when DAP adviser Lim Kit Siang announced that his party would support his candidacy.
Pakatan parties won 89 of the 222 seats in the Dewan Rakyat. DAP won 38, PKR 30 and PAS 21.
- See more at: http://www.freemalaysiatoday.com/category/nation/2013/06/26/shahidan-is-bns-deputy-whip/#sthash.YbHd2Cm8.dpuf

steadyaku47 comment: This is what I wrote of Shahidan Kassim in May 2011 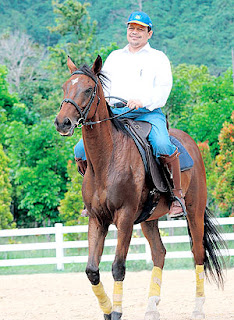 Shahidan Kassim was MB of Perlis from 1995 to 2008. During that time he fathered at least one child out of wedlock fornicated with many teenage Malay girls from Perlis and impregnated at least two Malay girls who had abortions to abort his child.He considered himself such a Lothario that he was not beyond having a quickie while on his exercise runs in and around Perlis in the evening. He was no slouch when it comes to making money too. A self styled UMNO warlord he was ultimately left high and dry by Barisan Nasional  members of the Perlis State Assembly who had grown tired of his sexual and ego seeking political shenanigans! He was always eager to “come down” to KL for the sake of the party and to meet with the party faithful on matters of national interest after which he would pursue matters of personal interest with his under aged mistresses. I myself have seen his car at Bangsar Permai in Jalan Tandok Bangsar a number of time. Whether it is there to pick up his children or this under-aged mistress is for him to tell us. He is still fuming that UMNO has forgotten his “services” in the front line against the Sultan of Johore during the “Mahathir fight Sultan” era. Now days he is left to amuse himself with the wealth he had accumulated while in office.... go play with yourself Shahidan!
Posted by STEADYAKU47 at Wednesday, June 26, 2013