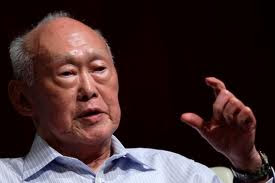 
About 20 years ago, when I was still of marriageable age, my father Lee Kuan Yew had a serious conversation with me one day. He told me that he and my mother would benefit if I remained single and took care of them in their old age. But I would be lonely if I remained unmarried.
I replied : “ Better lonely than be trapped in a loveless marriage.”I have never regretted my decision.
Twenty years later, I am still single I still live with my father in my family home. But my priorites in life have changed somewhat.
Instead of frequent trips over-seas by myself, to attend medical conferences or to go on hikes, I only travel with my father nowadays.
Like my mother did when she was alive, I accompany him so that I can keep an eye on him and also keep him company. After my mother became too ill to travel, he missed having a family member with whom he could speak frankly after a long tiring day of meetings.
At the age of 88, and recently widowed, he is less vigorous now than he was before May 2008 when my mother suffered a stroke. Since then I have watched him getting more frail as he watched my mother suffer. After my mother passed away, his health deteriorated further before recovering about three months ago.
He is aware that he can no longer function at the pace he could just four years ago. But he still insists on travelling to all corners of the Earth if he thinks his trips might benefit Singapore.
We are at present on a 16-day trip around the world. The first stop was Istanbul for the JP Morgan International Advisory Council meeting. We then spent two days in the countryside near Paris to relax. Then it was on to Washington DC, where, in additon to meetings at the White House, he received the Ford’s Theatre Lincoln Medal.
As I am writing this on Thursday, we are in New York City where he has a dinner and a dialogue session with the Capital Group tonight, and Government of Singapore Investment Corporation meetings tomorrow. After that, we will spend the weekend at former US secretary of state Henry Kissinger’s country home in Connecticut. Influential Americans will be driving or flying in to meet my father over dinner on Saturday and lunch on Sunday.
Even for a healthy and fit man of 88, the above would be a formidable programme. For a recently widowed man who is still adjusting to the loss of his wife, and whose level of energy has been lowered, it is even more challenging.
But my father believes that we must carry on with life despite whatever personal setbacks we might suffer. If he can do something that might benefit Singapore, he will do so no matter what his age or the state of his health. For my part, I keep him company when he is not preoccupied with work, and I make sure he has enough rest.
Though I encourage him to exercise, I also dissuade him from over exerting himself. I remind him how he felt in May last year when, after returning from Tokyo, he delivered the eulogy at Dr Goh Keng Swee’s funeral the next day.
He had exercised too much in the two days preceding the funeral, against my advice. So naturally, he felt tired, and certainly looked tired on stage, as he delivered his tribute to an old and treasured comrade-in-arms. A few of my friends were worried by how he looked and messaged me to ask if my father was OK. Now when I advise him not to push too hard, he listens.
The irony is I did not take my own advice at one time and it was he who stopped me from over-exercising. Once, in 2001, while I was recovering from a fracture of my femur, he limited my swimming. He went as far as to ask a security officer to time how long I swam. If I exceeded the time my physician had precribed, even if it was just by a minute, he would give me a ticking off that evening.
Now the situation is reversed. But rather than finding it humorous, I feel sad about it.
Whether or not I am in the pink of health is of no consequence. I have no dependants, and Singapore will not suffer if am gone. Perhaps my patients may miss me, but my fellow doctors at the National Neuroscience Institiute can take over their care. But no one can fill my father’s role for Singapore.
We have an extremely competent Cabinet headed by an exceptionally intelligent and able prime minister who also happens to be my brother. But the life experience that my father has accumulated enabled him to analyse and offer solution to Singapore’s  problem that no one else can.
But I am getting maudlin. Both my father and I have had our fair share of luck, and fate has not been unfair to us. My father found a lifelong partner who was his best friend and wife. Together with a small group of like-minded comrades, he created a Singapore that by any standards would be considered a miracle.  He has led a rich, meaningful and purposeful life.Growing old and dying occurs to all mortals, even those who once seemed like titanium. When all is said and done, my father – and I too, despite my bouts of ill health- have lived lives that we can look back on with no regrets. As he faces whatever remains of his life, my father’s attitude can be summed up by these lines in Robbert Frost’s poem Stopping By Woods On A Snowy Evening :
The woods are lovely, dark, and deep,
But I have promises to keep,
And miles to go before I sleep,
And miles to go before I sleep.