An interesting read. Bukan semuanya kosher but food for thought! With thanks to: 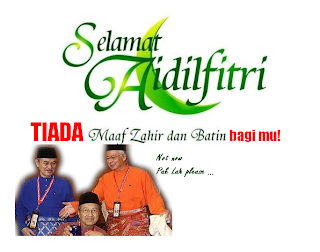 If he had a CPAP condition, he should have immediately got himself aCPAP machine to solve his daytime drowsy condition. But instead, he got himself a used Serani cipap.

He does not need to wait till 2013 to tell everyone. The boys at MyKMU had been talking about 7-8 years ago. This blogger truly can relate to CPAP problem. It has to be more than that.

By night, the real reason begin to surface - Malaysiakini 9:00 PM and Malay Mail Online at 9:17 PM (read in Bigdog's blog here) - in that Pak Lah had written a book, Awakening, the Abdullah years in Malaysia.

The instant impression is Pak Lah is working with the opposition and trying to help his men to win the UMNO party election. Looks like theEmpire strikes back. Pak Lah is known to be quiet but he widely known to be vengeful.

He takes the right time for Hari Raya to tell the world he wants to get even. So it looks like tiada maaf bagi mu, Mahathir.


Tun Dr Mahathir writes but Pak Lah? He falls asleep while reading, how could he write one? Be serious!

As reported, it seems he had written the 620 pages book with editing assistance from Singapore-based pro-opposition Bridget Welsh and James UH Chin. It is published by Strategic Information dan Research Development Centre (SIRD), Kuala Lumpur - NED funded publisher for SUARAM.

Our intel said the book was written by Dato Kalimullah "Masya Allah..." in consultation with Khairy Jamaluddin. More over, the "group" was trying to approach a Sabah-based portal to pay for publishing their articles.

So far, the two reports merely rewind Pak Lah's old excuse as spinned and churned by Kalimullah during those tumultous years. Kalimullah's boys at The Malaysian Insider's have moved to Dato Siew Ka Wei's Redberry Group owned Malay Mail Online. The newspaper is up for sale, we heard.

Bigdog has taken his first bite at the book here. He calls it an irony as he takes us back to the whole history of Pak Lah's pathetic administration which Dato Najib is still burdened to resolve it. Read also the commentaries.

Pak Lah still wants to justify that the country will go bankrupt if he had carried out the then RM12.4 billion but now mentioned as RM14.5 billion Double Tracking project. This project and the Crooked Bridge has highly strategic value and enemies backing our opposition would back anyone railroading it.

Is it really because it will put the country into bankruptsy?

Tun Dr Mahathir has long explained that he knows the company could afford it and the expensive project is not about cronyism or nepotism or corruption but building the country's future.

The reason is self-interest on Pak Lah's part. His interest is always about his family.

There was an opposition supporting writer, Kong Hui Chong, who wrote an article entitled "The Truth Behind the Northern Double Track Project."

Off course, he will tailor the story as two leaders fighting over power bounty but it has some interesting revelation on Pak Lah. We reproduce the excerpts below:


Mahathir Mohamad awarded the Double Tracking Project to MMC-Gamuda on 21st October 2003, just nine days before he stepped down as Prime Minister. On 1st November 2003, Abdullah Ahmad Badawi, fondly known as Pak Lah, took over as Prime Minister. The first thing that Pak Lah did when he took over as Prime Minister was to cancel Mahathir’s pet projects. The Crooked Bridge to Singapore was one and the Double Tracking Project was the other, which Pak Lah shelved the following month in December 2003.

Mahathir was furious. He had spent more than a year from mid-2002 to late 2003 discussing with Pak Lah as to what he can and cannot do once he took over as Prime Minister. Whether Pak Lah just forgot or whether he did a dirty on Dr Mahathir is not too clear. But the long and short of it, Pak Lah did everything he promised he would not do. And cancelling Mahathir’s pet projects was clearly one of the do-not-does. Actually, Pak Lah had a great dislike for Syed Mokhtar Al-Bukhary who had shunned him when he was the Deputy Prime Minister. Hence, within just a month of taking over as Prime Minister, Pak Lah did the unthinkable. He cancelled the Double Tracking Project, the Crooked Bridge Project, and all those other projects that Mahathir had given to his cronies. Did anyone not bother to tell Pak Lah that one just does not slaughter sacred cows, in particular Mahathir’s sacred cows?

Pak Lah explained that the government’s ‘poor finances’ did not permit such grandiose projects -- hence the need to cancel them. This caused Mahathir to flip. It gave the impression that Mahathir’s mismanagement has bled the country’s finances dry -- hence there is no more money. It also gave the impression that Mahathir’s projects are a total waste of money -- hence the need to cancel them. In short, Mahathir is a bungling idiot.

And by a wave of the magical wand of Shah Hakim and Kamaluddin Badawi, the project began to be revived.

All these facts have now been revealed in court when Seow and Shah Hakim admitted that they “provided technical expertise and networking capabilities to help revive the once-shelved RM12.4 billion double-tracking railway project …. It was through our efforts that the project was revived.”

The ‘networking capabilities’ and revival efforts included opening doors for Lin to present the revival ideas to then Minister-in-Charge of the Economic Planning Unit (EPU), Effendi Norwawi.

Effendi initially told Lin that given Pak Lah’s grim description of the country’s finances it would be difficult for the government to be seen as reviving it from government funding. Effendi, the (so-called) Sarawak financial wizard, then created this fanciful term for Lin to use when presenting the proposal to the government as a way in getting the project revived -- Private Finance Initiatives (PFI).

The idea was: the private sector can include all their additional financial costs and risks into the PFI proposal to make the project costs higher. Effendi also advised that after approval has been obtained, the PFI project could then revert to a design-and-build project fully shouldered by the government.

And that was exactly how MMC-Gamuda cheated the Malaysian public into believing that the PFI projects were fully funded by the private sector whereas in the end the taxpayers would be footing the bill.

For his wonderful advice and support, Effendi also asked Lin to sponsor his new wife’s hobby in extravagant stage productions. That explained how Effendi’s wife, Tiara Jacqueline, could have the finances to mount the most glamorous and expensive Malay stage play to date -- Puteri Gunung Ledang. Lin and Syed Mokhtar were also made to sponsor Pak Lah’s wife’s pet project in the Pride Foundation and Endon Award for Performing Arts Excellence scholarship fund.

You see, Pak Lah, his family, and his friends in the cabinet, wanted to teach Syed Mokhtar and his sidekick, Lin, a good lesson for shunning them during Mahathir’s time. So they were going to make MMC-Gamuda pay for every single one of their whimsical pleasures.


Shah Hakim had a deep distrust for Syed Mokhtar. So he had convinced Effendi that the project should be divided into two parts – the Infrastructure Works to be awarded directly to MGJV for RM10 billion and the Systems Work for RM2.38 billion which will be given to a contractor of the government’s choice. The Systems Work was supposed to be sub-contracted by MGJV to NR Sistem.

When Syed Mokhtar realised that the 30% margin that the Shah Hakim group was going to make from the RM2.38 billion System Work contract amounted to RM600 million, Syed Mokhtar got upset. He complained to Mahathir about how Pak Lah had cancelled the project and forced him to use the services of Shah Hakim who will now make RM600 million ‘atas angin’. Mahathir advised Syed Mokhtar to stall signing any contract with NR Sistem for the Systems Work.


According to the spinned story, Dr Mahathir begin to attack Pak Lah viciously and mocked him about being Mr Clean. ... Of course, the issue was more than that. In the ...

This infuriated Shah Hakim and Kamaluddin because they thought they had already agreed to the 30% margin, which was equivalent to RM600 million. That money was needed not just for them personally but also to fund Pak Lah’s 2008 elections campaign. Syed Mokhtar held back the money and refused to give Pak Lah what he needed for the 12th general election campaign. Mahathir had advised Syed Mokhtar to hang on and not to commit to any figure as Mahathir wanted Pak Lah to perform badly in the election and subsequently be ousted. The only way someone can become Prime Minister in this country is by paying huge sums of money to supporters to vote them into the hot seat. Without funds, Pak Lah could not pay for votes and was ousted.


This part of Pak Lah being denied election money is an embelishment. There was sufficient money for the 2008 election. Pak Lah's era was an era of rampant self interest and personal enrichment without anything to show for. He developed and delivered nothing really worthwhile for the country. His big ideas for the nation forward was disastrous.

Not only those in his small closed circle became instant billionaire, but the assistants like political secretaries are worth at least RM100 million, as one lawyers representing many UMNO politicans confided to us.


Post-March 2008, it was imminent that Pak Lah would have to give way to Najib. Syed Mokhtar, being the shrewd businessman that he is, then directed Lin not to sign anything with Shah Hakim’s NR Sistem – even for the agreed price of RM360 million .....

Why should Syed Mokhtar pay for blackmail of his already earned project?

Good for this Bumiputera businessman. He earned it.

It is not like some civil servants in power or politicians with the discretionary power taking money by taking bribes, kickbacks and corruption.

Why should this Bumiputera businesman being politically pressured repeatedly when he is the only one Bumiputera is in the top 10 richest man in Malaysia? More so when some 80% of top 50 richest Malaysian are Chinese.

Don't tell us Chinese are competitive and worked hard. They too are on subsidy, worked with unsavory characters, and biggest giver of bribes and kickbacks. Some 70% of corruption involves commercial transaction and both taker AS WELL AS GIVER OF CORRUPTION are guilty. Save the Malay are corrupt stereotyping, ok?

Why don't they raise issue on how the other Chinese business became multi-billionaires? Tan Sri Robert Kuok, for instance. Tan Sri Teh Hiong Piow, Tan Sri Vincent Tan, and so on.

Read the whole article here and one can sense the writer may be writing for someone. The story could be fabricated out of sporadic information here and there. But, lets see will Pak Lah respond. Kalimullah would surely be reading this blog, We are quite sure ...

It will be the most unforgiving Hari Raya for Pak Lah. Que sera sera ...Until more development from Pak Lah and his men, we like to wish to every Muslim: