Many a time in the course of the Anwar Ibrahim sodomy II trial, the question was raised as to how a strong and reluctant twenty-something-year old man could be sodomised by a sixty-plus-year old person. This question presupposes that an element of physical force was involved to bring the victim to submission. That supposition may be entirely erroneous.

A person of authority using his position or influence to gain sexual gratification from a person answerable or beholden to him is not a phenomenon either unknown or rare. It is in fact very common. Think of those sexual abuse cases involving Catholic priests and altar or choir boys which till now are plaguing the Catholic Church, those cases in the US military where superior officers sexually harass and exploit junior female personnel, instances in academia where instructors use their position to gain sexual advantage over students.

In many cases, because of their shame, confusion and emotional trauma, the victims took a great deal of time, sometimes years, to speak out on the victimisation committed against them. Very often, there was no physical violence threatened or inflicted and the victims appear to have physically consented to the sexual relations. In actual fact, their mental confusion and reluctance to question or resist the ‘requests’ or ‘suggestions’ by a person they look up to made them vulnerable to sexual exploitation. Or the exploiter is someone the victim is dependent on for job security or career advancement. The Anwar/Saiful sodomy case can easily fit into this pattern.

Some people consider it inconceivable or impossible for Anwar to have forced Saiful to submit to be sodomised. This is a very blinkered view, almost wilfully ignorant of what had happened in other parts of the world. The answer to the question posed many times by observers as to how it was possible that a 60-year old man can sexually exploit a physically strong 20-something year-old man is that the former by using his charisma, position and influence can persuade or coerce the latter to do things against the latter’s better judgement with no physical violence or threats necessary. So the act can appear to be physically consensual but in the mind of the victim during or after the act, it is something done against his or her will and is forced on him or her.

Far from it for me to say at this point that was what actually transpired in the Anwar/Saiful sodomy case. That’s for the trial to decide. What I’m saying is that it’s time people stop playing stupid and start to accept that it is not an impossibility for sexual exploitation to have taken place with no actual physical resistance on the part of the victim. Things get very complicated once the victim ‘submits’ to the exploitation as the element of consent arguably becomes apparent. It is for this reason that sexual harassment laws have been formulated to deter persons holding positions of authority and power in organisations from even attempting to take sexual advantage of their underlings.

steadyaku47:
The above was forwarded to me this afternoon.
Here are comments:

Anything is possible in the world that we live in. What we need to be crystal clear about is what we intend to do about the situation our country is in now. What DSAI or Najib do in their private moments is their business – not ours. Of course if what they do in their private lives hurt others then they must face prosecution but I am sure that this alleged incident will not see the light of day if DSAI is not a threat to BN. Rest assure that there will be more of these “issues” surfacing in the coming weeks if not months. How we take these “revelations” will decide the path our country will follow after the 13th GE. 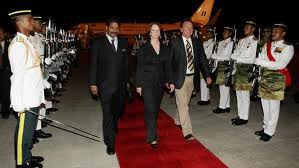 Here in Australia the Prime Minister, Julie Gillard has never married and lives in the Lodge (the PM’s official residence) with Tim Mathesion – her partner. To some eyes in sin, to most Australian it is her right as an adult to do so. He even accompanied her on her visit to Malaysia!

With the DSAI/Saiful situation – each and every Malaysian will have to make their own determination. Why is DSAI being pursued relentlessly by the BN government from the time of Mahathir? Sodomy 1, Saiful and now sodomy Two, the Carcosa tapes and God knows what else? Why was Rahim Thamby Chik not prosecuted for the statutory rape of a Malay Schoolgirl when Mahathir was Prime Minister? 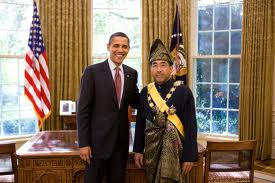 Why was Jamaluddin Jarjis not prosecuted for his “raba raba” incident and instead rewarded with a posting to Washington?

And I can go about endlessly about this but you and I know that DSAI is being pursued because he is a threat to BN in the 13th general election. It is a political decision – made not in the national interest but to serve BN’s interest. And once that political decision was made to pursue DSAi then all the machinery under the control of the Federal Government is brought to bear upon DSAI. No longer will Justice prevails because the Malaysian Judiciary then becomes a tool of BN, their political masters!

By the same token you can expect a blood bath of some sort perpetrated by whoever will win the 13th general election on the loser! Pakatan Rakyat or BN. There is no perfection in this world. Only reality.


I swore never to be silent whenever and wherever human beings endure suffering and humiliation. We must always take sides. Neutrality helps the oppressor, never the victim. Silence encourages the tormentor, never the tormented.
Elie Wiesel (1928 -)

So for me the decision is simple. I have put my lot with Pakatan Rakayat – for many reasons – but of primary importance is the need to get rid of UMNO and BN who have done enough harm to our country, to our people and most important, to the future of our children. Having done so I will take the bad with the good.

Pakatan Rakyat is not perfect but it will do for now. UMNO is the devil I know and I would not want the devil I now know to rule our country for another term. I might be alone in my support for Pakatan Rakyat but I have asked for others to be with me. You are one. With me we are two. Who else will join us?

I can write good or bad on just about any politician in Malaysia. These are realities that we bloggers face when we first start to write. The time has come to take sides. As we near the 13th general election it will be in the interest of UMNO to divide and rule. After sex the 3Rs, Race, Religion and Royalty will be used by UMNO to manipulate and manage the people! Any one of these Rs will be enough to cause a riot of the killing kind. That it will do so is of no concern to UMNO. UMNO uses them as and when required to achieve their own ends.

So let us not talk about peripheral issues.

·      About whether DSAI did or did not sodomize Saiful.

·      About whether the Christians are going to oust Islam as the official religion of Malaysia.

·      About whether Ketuanan Melayau is a right the Malays have that is enshrined in the constitution of this country.

Just let us go to the core issue. We have UMNO that will not stop at anything to retain power. After 52 years they have failed to put into place the 1Malaysia concept that they are still now talking about – and talking about 1Malaysia is all they are doing, will be doing and shall be doing until the 13th general election is over. If they win then we brace ourself for more corruption, more deceit and more greed but we will certainly not hear them talk anymore about 1Malaysia!

This is really a no brainer.
So simple or easy as to require no thought.
We need to be with Pakatan Rakyat.

Enough of talking about MACC not doing its job. About PDRM being corrupt. About 1Malaysia and Ketuanan Melayu. Enough of being angry about people being killed while in Police custody. Altantuya, PKFZ, Teoh Beng Hock, Kugan….all this will not be resolved until UMNO/BN is defeated at the 13th  general elections. And this is why I have thrown my lot with Pakatan Rakyat. Because only Pakatan Rakyat gives us the opportunity to defeat UMNO at the polls. Be with Pakatan Rakyat or be at the mercy of Najib and his goons for another term of greed, corruption and deceit.

You are one.
With me we are two.
Who else will join us?

Email ThisBlogThis!Share to TwitterShare to FacebookShare to Pinterest
Labels: sodomy