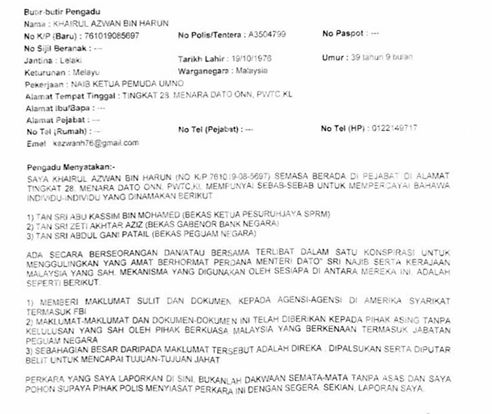 ·
WHATEVER YOU SAY, WHATEVER IS YOUR STAND AND WHATEVER YOU EXPECT TO BE THE OUTCOME, THIS IS INDEED A MOVE TO REMOVE NAJIB AS THE PRIME-MINISTER.

July 26, 2016
Former attorney-general says attempts at character assassination will only trigger a backlash and undermine the government in the long run.

KUALA LUMPUR: Former Attorney-General Abdul Gani Patail has described the allegations that he is involved in a conspiracy to topple Prime Minister Najib Razak and the Malaysian Government as a publicity stunt.

“These frivolous allegations are publicity-seeking stunts with no substance.

“Attempts at character assassination would only trigger a backlash and undermine the government in the long run,” he told Bernama.

In the report, Khairul Azwan claimed that the three were believed to be involved in a conspiracy to topple Najib and the Malaysian Government.

On July 27, 2015, Abdul Gani’s service as the Attorney-General was terminated due to health reasons.