I have seen Mokhtar Dahari play football. He brings speed, brilliant ball control and a love for the game of football that is yet to be repeated by anyone in Malaysia until today.

I watch our Badminton Team win the Thomas Cup from Indonesia and cheered together with Tun Dr Siti Hashmah and the whole country as we deliriously celebrated their victory.That was indeed a night to remember!

There was also sadness….the passing of Tunku, Tun Razak, Tun Dr Ismail, Tun Hussein Onn…all men of resolve who did what they believed was the best they could do for our country without fear or favour. Not everything they did was right but these were men untouched by considerations of wealth or vested interests.

I have watched with morbid fascination as Dato Harun Idris and Anwar Ibrahim were brought to trial and convicted for crimes that resulted in them being incarcerated and wondered if these were miscarriages of justice or were these a promise of what was to come – that those who were guilty of any crime, no matter what their station in life, would be prosecuted?

I bear witness to the change of our people from the time after Merdeka when we became one, then the division of race wrought by Mahathir as a means to an end (the end being the consolidation of UMNO’s hold on power) and now back to our people coming together again to demand that race must never again divide our nation….and in so doing the people did what our political leaders have failed to do – unite the people as one and all this i have seen within one lifetime!

All this I have seen and more but never have I witnessed the absurdity and desperateness such as that displayed by UMNO in their attempts to stave of defeat at the coming 13th general elections.

Stave: to avoid or prevent something unpleasant, often only temporarily.

Today another notch in this charade. This is getting into the realms of the absurd. 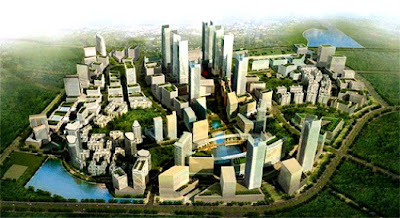 KUALA LUMPUR: Prime Minister Najib Tun Razak today announced a special task force to oversee the development of the Tun Razak Exchange, formerly known as the Kuala Lumpur International Financial District, until the sprawling project in the heart of Kuala Lumpur City is up and running.

This is the same Economic Planning Unit that has been the den of corruption and source of much wealth to UMNO and their cronies.

This is the same Nor Mohamed Yakcop whose very name brings much laughter and ridicule to those who knows of his past and present “exploits”..as the Malay say “Harapkan Pagar, Pagar Makan Padi!”.

The same Finance Ministry, Bank Negara and Securities Commission that jumps through hoops on command of their political masters!

This Tun Razak Exchange is doomed to failure even before it starts!

“The government will go out of its way to ensure that the exchange is a success and as a first step, I can announce to you today that we will begin a comprehensive review of business regulations,” he said in his keynote address before launching the exchange.

The logic behind this review is simple, he said, adding that: “Anything that contributes to future progress stays, anything that is outdated goes”.

I like the sound of that “a comprehensive review” and “anything outdated goes” …..shades of the ISA, PPPA: review and changes foreshadowed but never implemented comes to mind! Surely if anything is to go it has to be Najib and this Barisan Nasional government – not only outdated but out of sync!

The prime minister also announced that further incentives are in the pipeline, building on the incentives that he had announced last year.

Jesus Christs! 500,000 jobs to be created! That would be like saying they are going to move Kuala Lumpur to Klang to ease the traffic congestion and pollution in Kuala Lumpur! Did anybody do their sums before they came out with that 500,000 jobs created figures? Or does this BN government think that the people of this nation are gullible enough to believe that 500,000 jobs will be created by this Tun Razak Exchange because they tell us it is so? Aisehman like I believe that the dowry for Puteri Gunug Ledang were:

It will encompass world-leading international design and progressive planning tenets; its buildings and infrastructures will conform to the highest levels of sustainability.

Pedestrians will be able to walk and play in green public areas and it will have seamless links to public transportation including the mass rapid transit.

Najib said over 250 of the world’s leading companies would be located at the exchange, creating some 500,000 jobs directly and indirectly by the time the exchange was fully completed.

“40,000 will be knowledge workers specialised in financial services, reflecting our ambition for the Tun Razak Exchange to be home to a strong, vibrant and diverse international business community,” he said.

Najib you want this Tun Razak Exchange to be home to a strong, vibrant and diverse international business community? Let us just pause for a moment from the rhetoric’s of your political needs and instead take a look down south, across the causeway and into SINGAPORE.

We had the Casino in Genting for God knows how long – and with one fell swoop Singapore build their own Casino that now leaves Genting for dead.

We had F1 for God knows how long and again in come Singapore and left us again for dead with a night time F1 race that is already earning them kudos for a job well done!

And now you want to talk about a strong, vibrant and diverse international business community when Singapore has been just that for God knows how many years?

Can you imagine Singapore allowing your UMNO cahoots and their cronies to swagger amongst their business community as they do in Malaysia doing business the “UMNO” way?

Can you imagine FLOM and her designated Bag Man or Women doing their thing in Singapore?

Do you have any idea at all about what is needed to attract anyone to come to Malaysia in order to do business as it is done in a vibrant, strong and diverse business community? Huh! And you think you will be around to see this thing through? Dream on Najib…dream on! Najib do not allow your Father's name to be linked to a project that will surely fail under this Barisan Nasional government. You know that this Tun Razak Exchange is nothing more then another desperate attempt by you to use your Father's legacy to try and stave of the political oblivion coming your way. Be a Man Najib! Leave your old man out of your failures!
Posted by STEADYAKU47 at Tuesday, July 31, 2012